You are at:Home»News»New York State Society of Professional Engineers Recognizes No. 7 Line Project 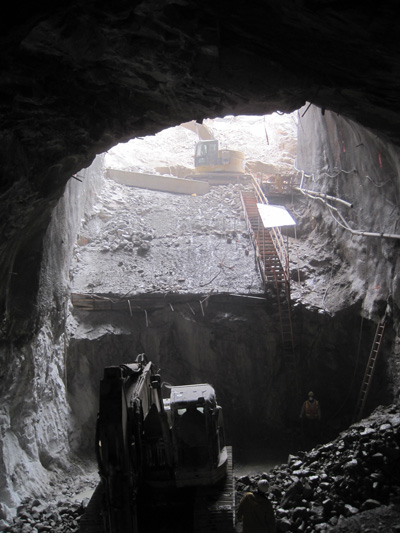 The No. 7 Subway Line Extension will provide transit access to the West Side of Manhattan, including the Jacob Javits Convention Center, by extending the No. 7 Line westward from its current terminus at Times Square to a new station being constructed at 34th Street and Eleventh Avenue.

The New York State Society of Professional Engineers (NYSSPE) announced that MTA’s $1.1 billion “Running Tunnels and Underground Structures” contract, the first portion of the $2.4 billion No. 7 Line Extension Project, was awarded the 2013 Construction Project of the Year by the PEs in Construction Group of NYSSPE.

“On behalf of the entire No. 7 Line Project Team, including MTACC and New York City Transit, our consultants and contractors, I want to thank NYSSPE for this great honor. We are extremely flattered,” stated Mark J. Schiffman, P. E., Esq., Vice President and Deputy Program Executive of MTA Capital Construction. The award was bestowed at NYSSPE’s Annual Conference and Awards ceremony in Lake Placid, N.Y., on June 7, 2013.

The subway extension project is to receive this award for outstanding professional engineering efforts in developing creative solutions and innovative technologies in construction of an infrastructure project. The No. 7 project used the first double-shielded tunnel boring machines (TBMs) to tunnel under New York City while placing precast concrete segments to form the tunnels’ walls. For the first time in the world, a ground freezing method was used to harden soil to act as rock to allow TBMs to maintain proper course while boring and placing the tunnel liners.

“This is a significant award for the No. 7 Line Extension Project,” said Dr. Michael Horodniceanu, President of MTA Capital Construction. “It recognizes the aptitude of our contractors and construction management team in the face of complex challenges.” The No. 7 Line tunnels and structures project was built by a joint venture of Shea/Skanska/Schiavone, known as S3II.

The No. 7 Subway Line Extension will provide transit access to the West Side of Manhattan, including the Jacob Javits Convention Center, by extending the No. 7 Line westward from its current terminus at Times Square to a new station being constructed at 34th Street and Eleventh Avenue.  It will help to stimulate economic growth and continuing development of the area. The Hudson Yards Development Corporation is overseeing the program. The No. 7 Line Extension is scheduled to open in June 2014.

MTA Capital Construction is a relatively new agency formed in July 2003. MTACC’s mission is to manage the mega-projects for system expansion and Lower Manhattan transit infrastructure projects.  The MTA was formed in 1965 as a federation of various transportation entities in existence at that time.  As the Capital Program projects increased in size and complexity the need for inter-agency coordination grew. MTACC serves as the MTA’s project management arm for mega-projects, which require an exceptional degree of coordination within and outside MTA. MTACC also serves as the MTA’s center of expertise on the most complex and advanced construction techniques, such as tunneling, building underpinning, and secant wall construction.

The New York State Society of Professional Engineers (NYSSPE) is an organization consisting of engineering professionals from all disciplines and employment sectors that advocates licensure, promotes the ethical, competent and lawful practice of engineering, and enhances the image and interests of its members and the engineering profession.  NYSSPE represents professional engineers (totaling more than 25,000 licensees in New York State) practicing in all disciplines (civil, structural, mechanical, electrical, geotechnical, environmental, etc.) and practicing in all practice settings (private sector consulting, industry, government, and education). For further information regarding the conference and awards ceremony, go to: http://www.cvent.com/d/vcqfyx or contact NYSSPE’s Programs Director, Jennifer Miller 518-283-7490.