Tunneling Gets Under Way for San Francisco Central Subway

This summer, tunneling for San Francisco Municipal Transportation Authority’s (SFMTA) Central Subway project officially began when TBM “Mom Chung” began churning on July 26. Her identical sister, “Big Alma,” was close behind with an early October launch. Not only did this mark the beginning of a new commuter service from the South of Market area to Chinatown, it is also the first new San Francisco Municipal Railway (Muni) subway constructed in the city in more than 50 years.

In contrast to the heavy-gauge BART (Bay Area Rapid Transit) system that provides a commuter network linking cities and suburbs across the Bay Area, Muni serves as the primary means of intracity transit.  Muni operates more than 80 routes through a combination of streetcars, buses and light rail – both surface and subsurface. Muni was founded in 1912 and carries more than 200 million customers per year. With continued development and need for commuter travel in and around San Francisco, SFMTA, which owns and operates Muni, has undertaken an improvements program that includes system expansion.

SFMTA recently completed Phase I of the Third Street Light Rail Project, which extended the system southward and included 5.1 miles of track and 18 stations. That portion of the project went into service in 2007. Phase II – also known as the Central Subway project – will start at the terminus of Phase I, the station at Fourth and King Street, and extend northerly along Fourth Street, going below grade near Bryant Street. After crossing Market Street, the alignment will follow Stockton Street to Chinatown.

The $1.5 billion Central Subway project involves 1.7 miles of twin bore tunnels and four stations (three underground) through one of the densest corridors in the United States not currently being served by commuter rail. The project has been in the planning phase for more than 25 years, but began in earnest in 2005.

SFMTA awarded the Central Subway tunnels contact to a joint venture of Barnard/Impregilo/Healy in June 2011 with a bid of $233.5 million, the lowest of six bidding teams. The project involves construction of 8,230 ft of twin segmentally lined tunnels driven by EPB TBMs to extend the existing Third Street Light Rail T-Line.

Ground conditions include both soft ground and hard rock formations, with the alignment passing within close proximity to existing adjacent structures, utilities, buildings and subway tunnels in the soft ground sections of the alignment. At one point, the new Central Subway line passes under BART and Muni Metro lines under Market Street.

The tunnel alignment begins north of Fourth Street and King Street, the existing terminus of the Third Street line, which veers onto Fourth Street just south of AT&T Park. The launch box is located underneath I-80 freeway overpasses that restrict vertical clearance for construction activities.

The launch box was constructed via open-cut methods, supported by concrete diaphragm walls and covered with a steel and precast road decking to provide for normal traffic flow patterns throughout the majority of construction. In addition, the project involves construction of five emergency cross passages, concrete diaphragm wall and secant pile headwalls for two future subway stations, extensive jet grouting ground improvements, compensation grouting, extensive structural and geotechnical monitoring, the construction of a secant pile retrieval shaft, and the construction of a cast-in-place concrete portal structure. A joint venture of Nicholson/Condon-Johnson was subcontracted to perform diaphragm wall installation for the subway launch box, jet grouting and treatment at two of the stations, compensation grouting and secant pile wall installation. 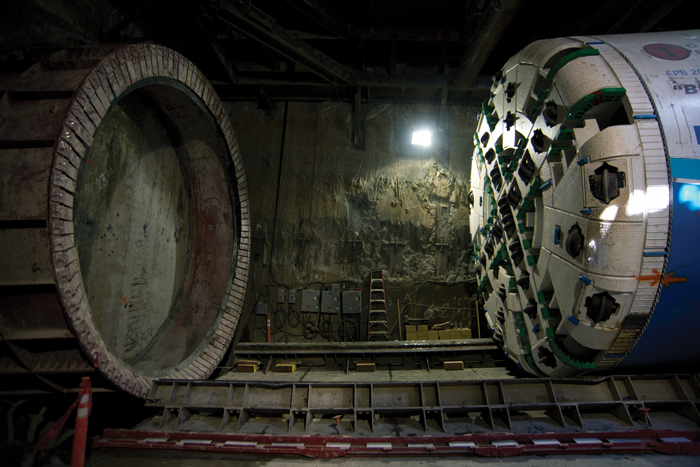 Robbins is providing the two 6.3-m (20.7-ft) diameter EPB TBMs – nicknamed “Mom Chung” and “Big Alma” after local historical figures. Both machines were designed to enable smooth excavation around tight turns down to 140 m (450 ft) in radius. The two EPBs were additionally engineered with mixed ground cutterheads using knife edge bits and carbide tools to mine the tunnels. Shaft-type screw conveyors will aid in excavation through poorly consolidated silt and sand deposits of the Colma formation below the ground water table.  Robbins horizontal belt conveyors will travel behind both machines for efficient muck removal during tunneling.

Originally envisioned to be separate contracts for the underground stations, SFMTA bundled station construction and track work and awarded a contract to Tutor Perini for $840 million. The scope of work for the project includes construction of three underground subway stations located at Union Square/Market Street, Chinatown, and Yerba Buena Gardens/Moscone Center, a surface-level station at Fourth and Brannan streets, and trackwork and systems from the Fourth and King streets to the Chinatown Station. Work began in 2013 and substantial completion is expected in 2018. 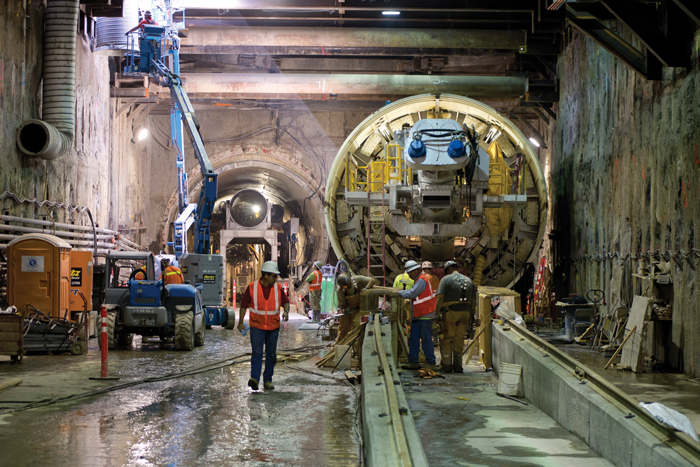 One of the unanswered questions at the beginning of the project has since been resolved. Initially, plans for retrieval of the TBMs were in the air as property acquisition and community relations had to be determined. Ideas were discussed for leaving the TBMs buried following tunneling activities. However, SFMTA secured property at 1731-1741 Powell Street in North Beach – the site of the former Pagoda Palace Theater – for retrieval of the TBMs.

The theater property, which had been vacant for 20 years, is being leased by SFMTA for use a retrieval shaft. The building has been demolished and crews are in the process of constructing the shaft on the site, which will be returned to the private owner upon completion of the project. The use of the theater property for TBM was beneficial on multiple fronts: it took construction (and congestion) off city streets, and it helped clear the way for redevelopment of the property in the bustling North Beach neighborhood. 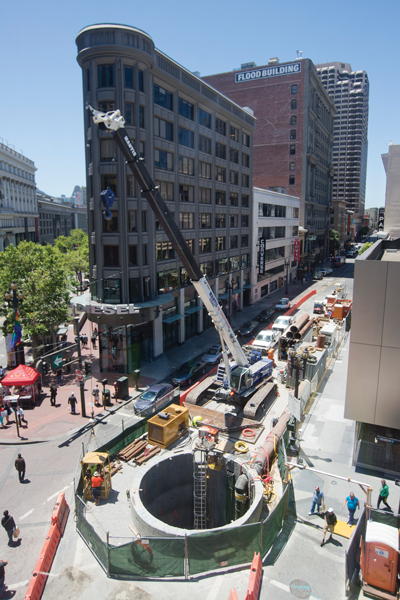 “The problem with extracting the TBMs was a real challenge,” Central Subway Program Director John Funghi said. “When you’re starting construction and you’re forced to change the end of the alignment because of community pushback, it’s a major issue in terms of accelerating all the environmental work, the planning and the engineering in order to make that happen. It took a lot of effort but the staff and city as a whole was able to make it a reality. Now that the building is down, people can move forward to what the property can become for North Beach. It shows what can happen when there  is cooperation with the community and the businesses in the area.”

When complete, the Central Subway line will extend light rail service to the Financial District and Chinatown, as well as provide direct connections to BART and Caltrain, two of the Bay Area’s largest regional commuter rail services. The Central Subway is scheduled to open to the public in 2019. It is estimated that the new subway will serve about 65,000 passengers daily by 2030.

“Once the Central Subway is built and in use I think people will say ‘I can’t imagine living without this,’ ” Funghi said. “It’s going to speed up people’s ability to get into downtown San Francisco for entertainment or to go to their jobs every day. We envision people migrating more and more toward public transportation.

“The Central Subway is a a great example of good planning, good engineering and providing an excellent product, and there is going to have to be more projects in the future because capacity needs are just going to grow, and we need to rise to the challenge to put these projects in place.” 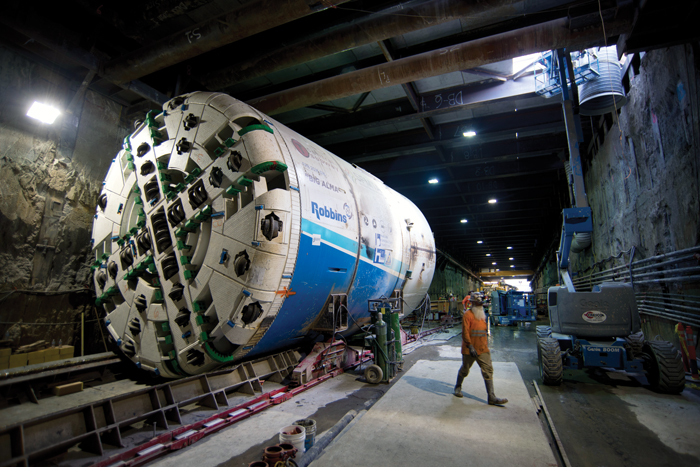