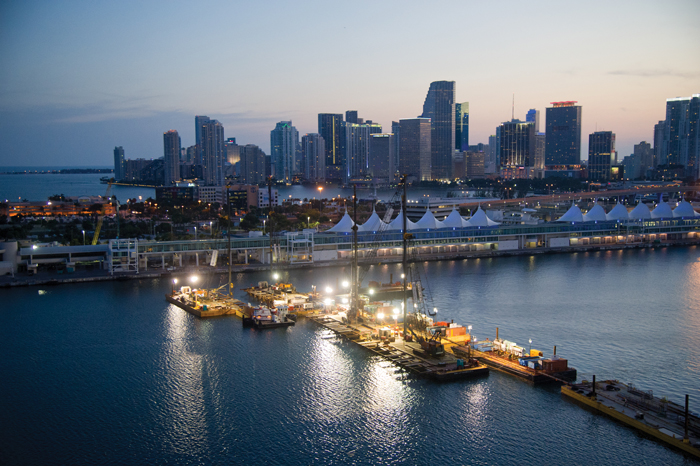 When you think about state-of-the-art tunneling projects, places like New York, San Francisco and Los Angeles immediately jump to mind. These urban centers, after all, are home to mass transit systems that weave their way near the surface through densely populated cities and in proximity to existing buildings and utilities. And while some of the projects under way or in the planning stages in these areas are indeed pushing the limits of tunneling technology, the PortMiami Tunnel is faced with its own set of challenges in an area that has never seen mega-tunnel projects.

The PortMiami Tunnel project involves the construction of twin tunnels, 4,200 ft in length and 39 ft ID, connecting Watson Island and Dodge Island in Biscayne Bay. The tunnels allow traffic generated by the Port, located on Dodge Island, to flow into the existing highway system and bypass surface streets downtown, which can become congested with cargo trucks and cruise line buses. In addition to enhancing traffic flow to and from the port, the project will help improve quality of life downtown and promote development. Envisioned for more than 30 years, the tunnel is well under way and is on schedule to open to traffic in 2014.

Challenges associated with the project include keeping the port operations open at all times while constructing tunnels under the Government Cut channel in complex geology that required extensive ground improvement to allow tunnel boring operations. Additionally, the PortMiami Tunnel project is unique in the United States in that it is among the first to use a public-private partnership approach with the private partner – MAT Concessionaire LLC – providing a portion of the financing as part of the project.

Project Background
The PortMiami Tunnel was needed to provide a direct access between the seaport, I-395 and I-95, and to create another access to PortMiami besides the Port Bridge, which is currently the only connection to the mainland. These improvements are intended to keep PortMiami – the county’s second largest economic generator and one of the busiest ports in the county – competitive. Completion of the tunnel goes hand-in-hand with port improvement projects to dredge the channel and enhance rail cargo capacity to accommodate Post-Panamax ships.

Several alternatives have been considered, including reconfiguring roadways, building a high-level bridge over the channel and a no-build option, but tunneling emerged as the most effective option. Based on the engineering and environmental criteria, the tunnel best improves safety conditions, reduces traffic congestion, creates no significant long- or short-term environmental impacts and has no long-term effects on marine navigation. 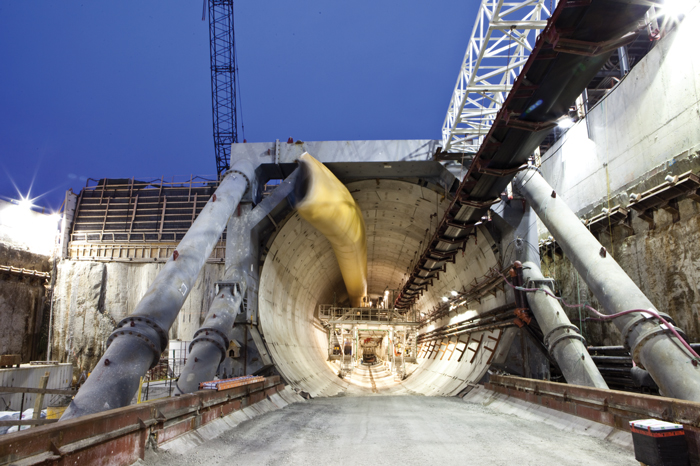 FDOT selected a contracting scheme referred to as a design-build-finance-operate-maintain (DBFOM) in which the private partner finances, designs and constructs the tunnel, and operates and maintains the finished facility. At the end of 2044, the private partner will return the tunnel to FDOT in first-class condition. According to FDOT, this type of contracting mechanism is ideal when the public agency does not have the full funding in place to construct the project. The private financing allows the construction to proceed and deliver the project earlier. Meanwhile, the stipulation that the tunnel be returned in first-class condition provides incentive for the private partner to keep the tunnel up-to-date. 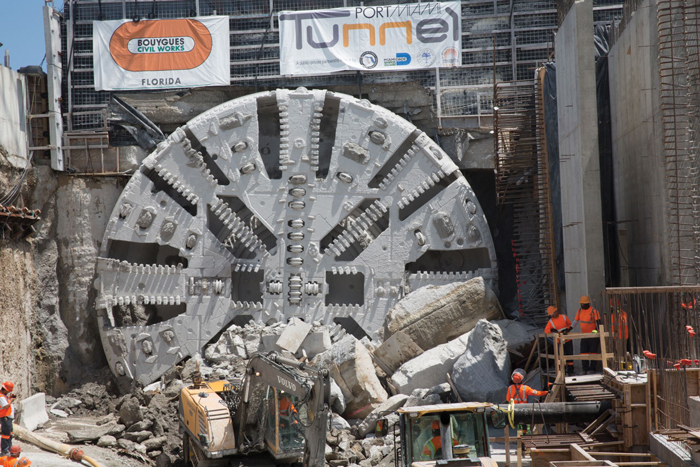 In 2006, FDOT issued a request for qualifications and short-listed proposers later that year.  The project was awarded to MAT Concessionaire LLC, with Bouygues Civil Works Florida (BCWF) Design-Build contractor and 10% equity partner. The contract was signed on Oct. 15, 2009, and Notice to Proceed was issued in May 2010. The 43-ft diameter Herrenknecht EPB TBM arrived in pieces on June 23, 2011; began the eastbound tunnel on November 11, 2011 and completed it July 31, 2012. The westbound tube mining commenced on October 29, 2012 and was completed on May 6, 2013.

Building the POMT
The geology for the PortMiami Tunnel is complex and challenging. The soils consist of weak rock and soft ground conditions – including silts and manmade fills – along with porous limestone. BCWF performed a complementary geotechnical investigation report wherein it identified zones in need of ground improvements by the means of conditioning and formation grouting. Additionally, BCWF is using ground-freezing techniques for the construction of two out of the five cross-passages.  The ground freezing is being performed by Moretrench based on a design by Bouygues.  It  is a first in Florida and the first time freezing has been used in the United States for cross passages.
The highly dissolved coralline limestone layer required an extensive grouting program to be performed ahead of the TBM drive in order to reduce the porosity and permeability of the ground a to mine safely without confinement pressure. Nicholson Construction performed this formation grouting program using a unique thyxotropic grout that was also developed by Bouygues for the specific conditions. Time-restricted by the port’s busy cruise ship schedule, the program was executed both on-shore, over-water, inside buildings, and consisted of over 1,000 holes – more than 18 miles of drilling and 65,000 cubic yards of grout. 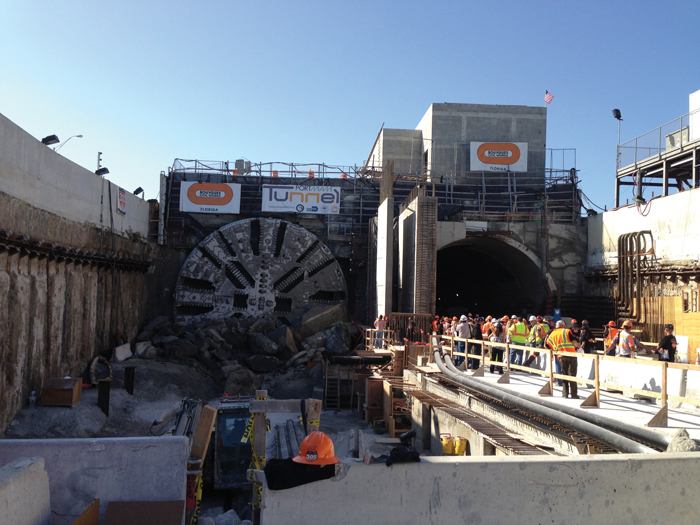 The highly porous and permeable ground conditions throughout the tunnel alignment did not permit the traditional routine TBM cutterhead inspections and maintenance. To meet this challenge, Malcolm Drilling constructed several refuge chambers at pre-determined locations on the alignment using cutter soil mixing (CSM) panels in order for BCWF’s TBM team divers to safely access the cutterhead.

Additionally, Malcolm performed Shallow Soil Mixing to a depth of 23 ft along the first 510 ft on Watson Island and 575 ft on Dodge Island due to the lack of ground cover for the initial sections of the tunnels and the geology. Because of limited project right-of-way along the alignment and to improve future traffic flow, the tunnels were brought together at both ends into one single shaft, which resulted in a separation between the tunnels of only 14 ft at break in/out. To ensure that the tunnels remained stable during construction, Cutter Soil Mixing columns were implemented, by Malcolm, between the tunnels over a distance of 820 ft on Watson and 740 ft on Dodge.
About a third of the overall tunnel alignment of both tubes’ geology was extremely porous rock.  Safe mining through this challenging geology was accomplished using an innovative water pressure balance/control mode on the TBM – Water Control Process (WCP); making this the first-ever hybrid TBM.

Installation of the internal structures and Mechanical-Electrical-Plumbing-Fire (MEPF) elements are in progress in the eastbound tunnel as well as the internal structures in the westbound tunnel.  Furthermore, BCWF is going through the final design phase of the ITS and Mechanical-Electrical-Plumbing (MEP) components. Construction of these items is expected to begin soon.

The project is expected to be completed and open to traffic in May 2014.

Entering into a PPP
Every project delivery mechanism comes with pros and cons. When considering a public-private partnership, the decision-making process can become even more difficult considering the myriad alternatives that can be built into the contract. We asked FDOT what advice they would give to an owner considering a PPP for the first time, and here’s what they said:

Meet “Harriet”
The star performer of the PortMiami Tunnel is the 43-ft diameter Herrenknecht EPB TBM nicknamed Harriet. Harriet has completed both of its 4,200-lf drives under Biscayne Bay, leading the way to the completion of Miami’s long-awaited program to improve efficiency in and around the port. The TBM was built in Germany and arrived in South Florida on June 23, 2011. Below are some of Harriet’s vital stats:

Namesake: Harriet Tubman. The Miami-Dade County Girl Scouts Troop named the TBM Harriet, after the African-American abolitionist who escaped slavery and led several rescue missions through a network of secret passages and safe house known as The Underground Railroad.

Diameter: 43 ft. At the time it was launched, it was the largest soft-ground machine used in North America. 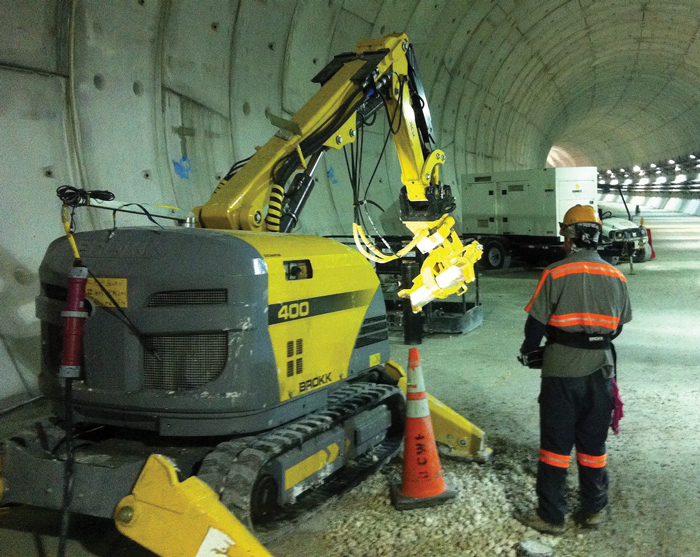 The TBM is the star of the Port Miami Tunnel project, but a strong contender for best supporting equipment is a relatively tiny machine: a Brokk 400.

The Brokk 400 came to Miami courtesy of Alain Mazzia, the Bouygues plant and equipment manager responsible for sourcing equipment. He first ran into a Brokk on a nuclear waste project in France, and when he looked at the challenging factors of cross passage excavation, the unique machines came to mind. “I knew the Brokk was dependable, as was the support,” he said. “Also, the geometry of the machine is a good combination of size, power and tools.”

At only 14 ft long, 5 ft wide and less than 6 ft tall, the Brokk is small enough to stay out of the way when it’s in the main tunnels, where crews and larger machines are constantly coming and going. The machine also maneuvers freely inside the relatively cramped space of the passages, which range in height and width from 10 to 14 ft.

Inside those passages, the Brokk 400 delivers tremendous force with a hydraulic breaker to excavate hard soil, some of which is being artificially reinforced with grout or through a freezing process to add stability. Once the material is excavated and sized, crews are using a bucket attachment to remove it from each passage.

The next step is to place support ribs at 3.5-ft intervals. The machine grasps the top section of a steel rib with a beam manipulator retooled specifically for the job, carries it to the installation point, lifts and positions it, then holds it in place while miners bolt the lower sections to it.

Finally, the crews are using the Brokk for qualitative excavation, where the precision and sensitivity of its remote control allow the operator to approach theoretical limits without over-excavating.

Throughout the process, the Brokk enhances safety for the miners.  The remote control keeps the operator away from potential cave ins, and the electric-drive ensures crewmembers aren’t exposed to dangerous emissions.

“The Brokk 400 is powerful and precise, and it’s quite safe,” Mazzia said. “It’s been the perfect machine for this part of the project.”