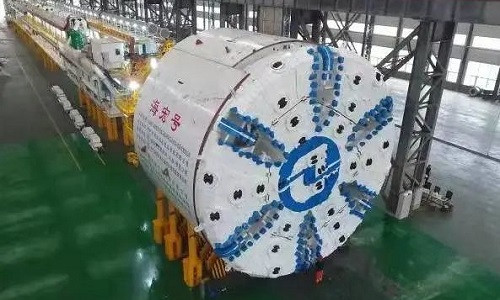 CREG’s “Haihong” slurry TBM is applied to excavate Dalian Metro Line 5 subsea tunnel from Railway Station to Suoyu Bay South Station. Launched on Jan. 18, 2018, the TBM successfully broke through on Jan. 10, 2021. The successful breakthrough of this project marks that CREG has the capability of overcoming the “worldwide problem” of tunneling in karst strata under seabed with a large diameter shield machine.

The construction between Railway Station and Suoyu Bay South Station posed four challenges, which had brought unpredictable challenges to the construction, and was thought as an unprecedented “worldwide problem” by industry experts. The first challenge is the long tunneling distance in high-strength hard rock stratum, which means that the TBM needs to continuously advance 2,882 m. The second challenge is that the TBM encountered a lot of environmental risks, for example, the TBM has to pass through under buildings and transportation facilities such as channel and wharf. What’s more, there are weathered slots, fault zones and uneven soft and hard strata, which are scattered in limestone, diabase and calcareous slate. And the rock has a high compressive strength with the maximum of 118 MPa. The third challenge the TBM faced is high water pressure caused by large buried depth. with the maximum of 0.5 MPa. The fourth challenge is that the TBM has to pass through a 1,538-m long area with strong karst development. More than 1,000 various karst caves were found during exploration with the maximum height of 29.8 m, which is quite difficult to find out and deal with.

The TBM “Haihong” has a strong pertinence and can adapt to unfavorable geology such as karst cave, fault fracture zone, upper soft and lower hard stratum. CREG optimized the cutting tools, since they would be frequently damaged by the complex geology. As a result, the excavation speed successfully increased from 60 m per month to 90 m and then 120 m, and finally exceeded 200 m per month, creating the excavation record of large diameter TBM tunneling in seabed hard rock strata in China.

After the completion of Dalian Metro Line 5, a north-south urban fast track will be formed in Dalian city, which will shorten the time from Suoyu Bay to Railway Station from more than 30 minutes to less than 3 minutes, effectively alleviating the ground traffic pressure and building a new pattern of Dalian with “one bay with two banks.”