You are at:Home»News»New System Being Developed to Combat Tunnel Fires 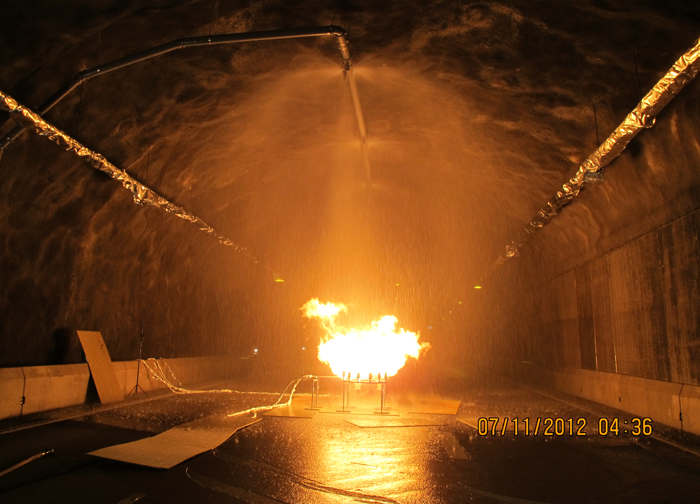 A fixed fire-fighting system, which has not previously been used for fires in tunnels, will be tested by SP Technical Research Institute of Sweden. The system will be used in road tunnels in the Stockholm Bypass (Förbifart Stockholm), a project that will start in 2014.

Stockholm Bypass is a proposed new highway connection for E4 through western Stockholm. A large part of the road, about 50 km, will pass through a tunnel and it is very important that adequate protection against fire is in place. The number of passing vehicles is large: Forecasts show that up to 145,000 vehicles/day may pass through the Stockholm Bypass.

“The amount of vehicles makes the tunnel a congestion risk and so the danger of fire occurrence is greater,” says Haukur Ingason, professor and tunnel fire expert at SP.

The fixed fire-fighting system was developed by the Swedish Transport Administration and the fire consultant company Brandskyddslaget in collaboration with SP. It is a simple and relatively inexpensive solution where large water droplets are sprayed from nozzles in a tube mounted along the ceiling in tunnels.

The fire tests will be conducted in mid-September in the Runehamar Tunnel, which is a disused road tunnel in Åndalsnes, Norway, where SP has previously conducted extensive fire tests. 420 wooden pallets will be placed in the tunnel to simulate the pay load of a truck. This fuel is expected to produce a fire that radiates energy at about 100 million watts. It is as much as 2.5 million ordinary 40-watt lamps, giving an idea of ​​how much energy a fierce fire can create.

“If the tests show that the technology works as intended, it will affect the vision around the world on how future fixed fire-fighting systems can be dimensioned,” says Ingason.

The information is based on a press release from SP Technical Research Institute of Sweden.