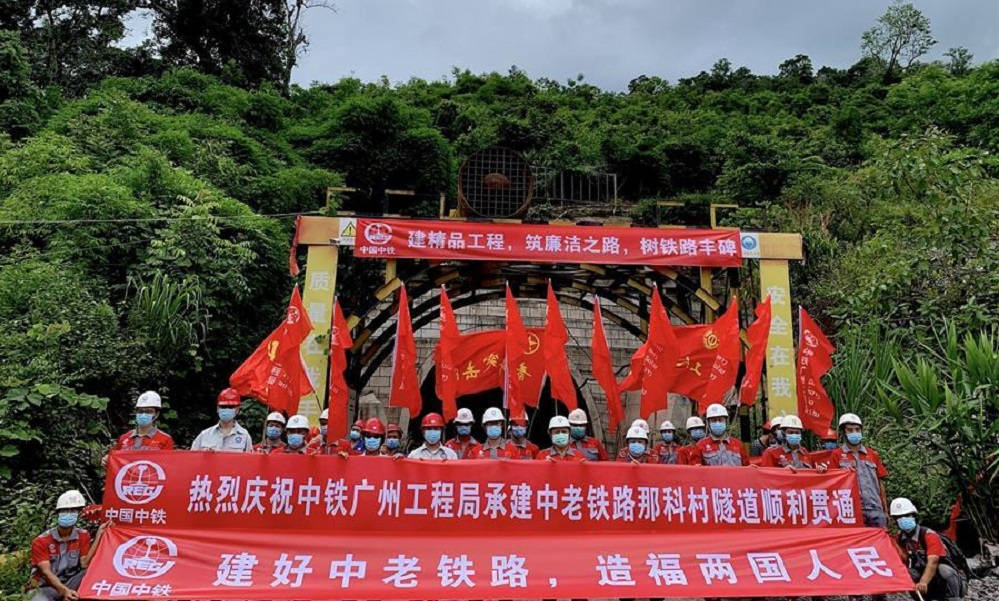 The 9,296-meter Ban Nakok Tunnel, in northern Laos’ Oudomxay Province, some 400 km north of the Lao capital Vientiane, went through harsh geological conditions which made its construction a key bottleneck of the railway.

The Ban Nakok Tunnel past through four fault zones and complex geological situation which brought huge difficulties to the construction and the safety control.

Since the start of its construction in May 2017, the CRECGZ project department has actively carried out scientific and technological innovations to overcome the difficulties, and bore scientific research results such as “key technologies for soft rock tunnel construction in Southeast Asia’s rainforest” to effectively accelerate construction.

Since the beginning of this year, to overcome the impact of the COVID-19 pandemic, the project department simultaneously carried out epidemic precaution and construction, especially making full use of the advantages of localization, purchasing large quantities of local construction materials such as sand, gravel and cement and recruiting more local workers to promote cooperation with localities.

The China-Laos Railway is a strategic docking project between the China-proposed Belt and Road Initiative and Laos’ strategy to convert itself from a landlocked country to a land-linked hub.

The 414-km railway will run from Boten border gate in northern Laos, bordering China, to Vientiane with an operating speed of 160 km per hour.

The electrified passenger and cargo railway is built with the full application of Chinese management and technical standards.