You are at:Home»News»Doing Big Things in Small Spaces 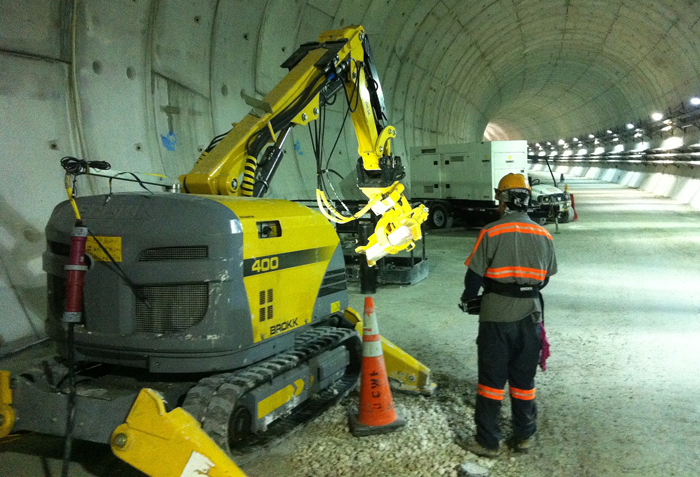 The Brokk 400 waits in one of the main PortMiami traffic tunnels. With the machine’s small size, cross passage crewmembers can keep it out of the way of other crews and equipment moving in and out of the tunnels.

From a vast army of workers to gargantuan machines to immense volumes of material being moved, almost everything about the PortMiami Tunnel (POMT) project points to tunneling on a massive scale. Almost.

The star of this underground and underwater show is a Herrenknecht TBM, a colossal, worm-like piece of equipment nicknamed “Harriet” by a local Girl Scout troop. With her 42.3-ft diameter cuttinghead and a total length of 457 ft, Harriet is boring through thousands of cubic meters of clay, dirt and sand, which is often mixed with coral and other materials, to create two 4,200-ft traffic tunnels connecting Watson Island and PortMiami on Dodge Island beneath Biscayne Bay.

But in the midst of all of the oversized equipment and machines, a strong contender for the best supporting nod goes to a relatively tiny machine: the Brokk 400. Bouygues Civil Works Florida crews are using the compact, remote-controlled, electric-powered machine to excavate five cross passages between the twin traffic tunnels. The passages will be essential to the safety of people who drive their vehicles under the bay every day.

The tunnel project, launched in October 2009, consists of three primary components: excavation and construction of the traffic tunnels, connections to PortMiami’s roadway system, and widening of the MacArthur Causeway Bridge. Bouygues Civil Works Florida is the design-build contractor and one of the lead companies on the project.

When the twin tunnels are complete, they will run under what’s known as Government Cut, the main shipping channel in Biscayne Bay. At their deepest points, they will be 120 ft below the floor of the bay. Each of the 39-ft diameter tunnels will comprise two traffic lanes, curbs, walkways, ventilation fans and other safety features. Eastbound traffic will be moving into the port and westbound vehicles will be heading out.

The cross passages will provide emergency egress for drivers and passengers. They range in height and width from 10 to 14 ft, and from around 16 to nearly 70 ft in length. They’re large enough to allow people to escape from one traffic tunnel to the other, and all five also will have additional room to store equipment for maintenance, pumping and other uses.

The Brokk 400 came to Miami courtesy of Bouygues Plant and Equipment Manager Alain Mazzia, who first ran into one of the compact machines several years ago on a nuclear waste project in France. On that job, Mazzia was part of the team that dug two 500-m deep shafts, using a Brokk to excavate galleries at the bottom. When he looked at the complicating factors of excavating the Miami tunnel cross passages, the Brokk came to mind.

His reasons for bringing the Brokk 400 to Miami were straightforward. First, at 14 ft long, 5 ft wide and less than 6 ft tall, the Brokk 400 is small enough to stay out of the way when it’s working in the main tunnels, where crews and larger machines are constantly coming and going. It also has exceptional maneuverability and can move freely inside the relatively cramped space of the passages. Next, since it’s powered by an electric motor, there are no dangerous emissions. And while the Brokk 400 is small, it is extremely powerful. With nearly 6,900 ft-lbs of breakout force, it can break through extremely hard and artificially reinforced ground. Finally, and most importantly, since it’s remote-controlled, it removes operators and other crewmembers from potential danger.

“This is the perfect machine for this part of the project,” Mazzia said. “With the cramped space, challenges in safe excavation and the need to stabilize the ground around the passages, the Brokk’s power, precision, size and versatility make it ideal.” 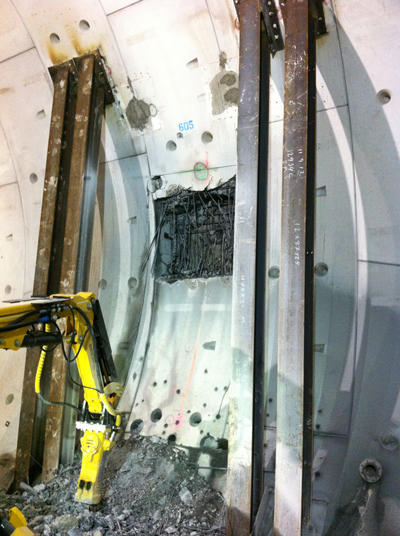 The Brokk 400, equipped with a hydraulic breaker, knocks out chunks of the concrete casing in one of the main traffic tunnels to begin one of five cross passages in the PortMiami Tunnel project.

The miners start and finish each cross passage by first cutting a rectangular hole through the concrete wall of the main tunnel, using the Brokk 400 to break up and remove the concrete. Once they move beyond the entry and before they come too close to the point where the passage will connect to the other traffic tunnel, they put the Brokk to work with four attachments – a breaker, a drum cutter, a bucket and a beam manipulator.

First comes the quantitative excavation in which the crews use the Brokk’s power with the breaker to remove the largest amount of material, break it down and size it. In areas where the ground is reinforced with grout or frozen for stability, they use the drum cutter, which excavates with less vibration. Then they use the bucket to load material into carts and remove it from the passage. The crews also use the Brokk, along with a specially designed beam manipulator, to place support ribs in the passages.

The qualitative excavation takes advantage of the precision and sensitivity of the Brokk’s remote control to approach what Gregory Berger-Sabbatel, the cross passages field engineer, calls the “theoretical excavation limits” without over-excavating. These are areas outside of the passage’s pre-determined dimensions, or near the end of the passage where it will intersect with the traffic tunnel.

Steel support rib installation has provided a unique challenge, and Brokk retooled its standard beam manipulator specifically for the job. The ribs are horseshoe-shaped or circular, depending on the passage in which they are being placed. They come in several sections that need to be connected, and the full assembly needs to be attached to the inside diameter of the cross passages before excavation can move forward. In all of the tunnels, the ribs are placed at 3.5-ft intervals.

The Brokk 400’s innovative three-arm design, which expands its reach both horizontally and vertically, comes into play in placing the ribs. The beam manipulator grasps the top section of a steel rib, carries it to the installation point, lifts and positions it, then holds it in place while miners bolt the lower sections to it. With the ribs in place, the miners install wire mesh around the walls and ceiling and a contractor applies shotcrete. Then the process starts over again: mine, break and remove materials, reinforce with ribs, install wire mesh and apply shotcrete. Changing attachments before each task takes no more than 15 minutes.

“The multiple attachments, and how easy they are to put on and take off of the Brokk, really save time,” said Eric Deltour, the Bouygues cross passages superintendent. “We keep them at the entrance to the cross passage so they’re ready when we need them. When we change tasks from excavation to spoil removal to rib installation, changing tools is quick and efficient.”

But before speed and efficiency, the primary concern for this type of project is safety. “The main danger in any mining is a ground collapse, and there is more of a chance for that during the quantitative excavation,” said Berger-Sabbatel. “With the Brokk, the operator can stay out of the way with the remote control. The machine is the only thing out front, so everybody is safe.” 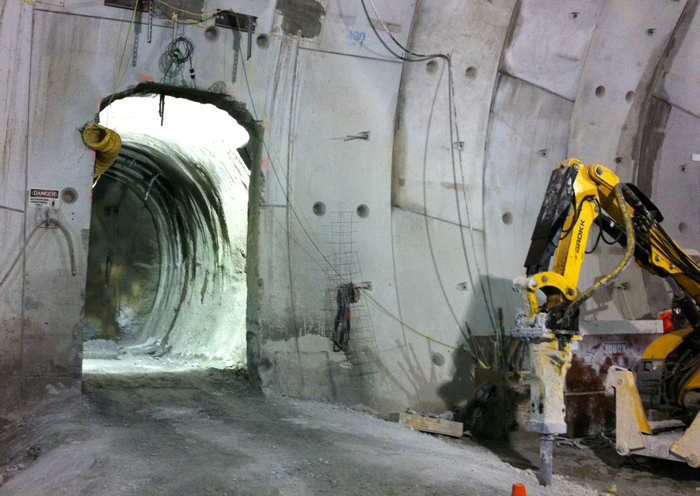 Bouygues Civil Works Florida crews are using the compact Brokk 400 (right) to excavate five cross passages between the twin traffic tunnels of the PortMiami Tunnel project. The passages range in height and width from only 10 to 14 ft.

August Scalici, the field sales application expert at Brokk and an experienced miner himself, trained Deltour, Berger-Sabbatel and the crewmembers excavating the cross passages. “It’s an intense process,” he said. “They have to keep water out while they’re digging the passage, and when it’s done, it has to be watertight and withstand the extreme pressure of the dirt on top of it. These guys are pros, and it’s pretty interesting to see how it’s all getting done.”

“The most challenging aspect is definitely the confined space,” Deltour said. “This is different from traditional mining, where the miners have room to excavate. Also, the openings from the main tunnels into the cross passages are relatively small compared to the size and volume of the excavation we’re doing. With the Brokk, our crews are able to get right in there and easily get the excavated material out.”

The Brokk’s power has been on full display as it has broken through materials being used to reinforce the soil and reduce the potential for cave ins. “We’re treating the ground prior to the excavation, and in some cases during the excavation, to increase the ground strength,” Berger-Sabbatel explained. “It keeps the cross passages stable and minimizes risk.”

The soil is being stabilized around the cross passage excavation areas in two ways. The first method consists of creating a cohesive and watertight plug from the surface with Cutter Soil Mix panels completed by Malcolm Drilling Co. out of San Francisco. The second method is to freeze the ground by super cooling the water in the soil. This is accomplished by circulating chilled liquid brine through small pipes. Nicholson Construction Co., Cuddy, Pa., is drilling and installing the freeze pipes and Moretrench, Rockaway, N.J., is handling the freezing process.

Not to be overlooked is the Brokk’s precision, which has been a must because the locations of cross-passage openings in both traffic tunnels are predetermined. “Before the excavation even begins, our surveyors align a laser along the cross passage,” Berger-Sabbatel explained. “This gives us offsets from the laser point so we know how much left, right, up or down we need to excavate. The accuracy of the Brokk makes it much easier to follow the alignment given.”

If everything remains in alignment and on schedule – in the tunnels where Harriet is eating her way from one side of Biscayne Bay to the other and in the small cross passages where the Brokk continues to make headway rib by rib – the PortMiami Tunnel project will be completed and open to traffic in May 2014.

When it’s all said, done and dug, there will be lessons learned for the companies who took on the project. For the men who relied on the Brokk 400 to excavate and fortify the five cross passages, it’s this: even when you’re talking about tunneling on a massive scale, never, ever underestimate the little guy.

This article was submitted by Brokk Inc.