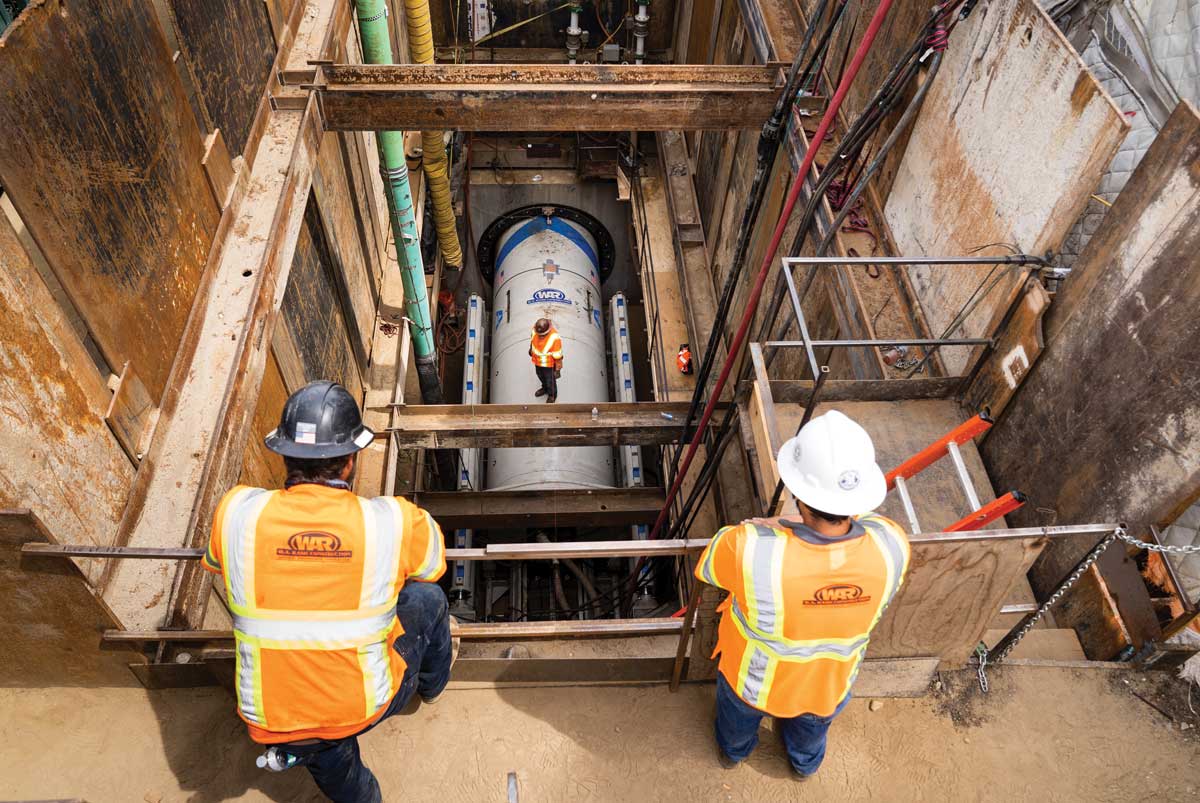 Formed in 1902, the Los Angeles Department of Water and Power (LADWP) serves a population of more than 4 million people in Southern California, and its water system is the largest municipally owned and operated retail water utility in the country. Given the size and age of the system, the population served, and the arid climate, reliability is a key driver for the department as it prepares for the future.

Currently, LADWP is in the midst of a 10-year Water System Capital Improvement Program focused on maintaining or replacing existing components of the water system, and constructing new facilities to ensure LADWP fulfills its mission of providing reliable and high-quality water to the residents of Los Angeles.

Part of that effort is the City Trunk Line South Unit 3 (CTLS 3) Phase II in North Hollywood. The CTLS 3 project will replace a 100-year-old-plus water pipeline that runs along Whitsett Avenue from Vanowen Street to Magnolia Boulevard.

The project comprises 5,357 lf of pipe replacement in total, using a combination of open-cut construction and microtunneling to install 60-in. diameter welded steel pipeline. The project was awarded to W.A. Rasic Construction (Rasic) with a low bid of $43 million. Notice to Proceed was issued in August 2019.

Based in Southern California, Rasic has become one of the largest privately owned utility contractors in the Western United States since its founding in 1978, completing more than 1,000 projects yearly with over 500 employees and sales in excess of $150 million annually. The firm has worked frequently with LADWP in the past, including several tunnel projects, but the CTLS 3 project presented a first: it is the first time that Rasic is self-performing microtunneling operations.

The tunneling portion of the CTLS 3 project comprises five microtunnel drives and three launch pits. Two of the launch pits will be used to launch tunnels from either side. To perform the tunneling operations, Rasic selected an Akkerman SL SL82P MTBM, which was pre-approved by LADWP and recommended by previous tunneling subcontractors.

The five microtunnel drives total approximately 4,200 lf with each drive approximately 900 ft long. Depths are above the water table approximately 35 ft deep through clay and sandy conditions. Crews are installing 20-ft sections of 72-in. diameter Permalok steel casing pipe into which the 60-in. CML&C welded steel pipe will be finalized.

The project site is in a heavily congested residential and commercial area requiring careful coordination and traffic control to minimize disruption to residents.

The project site is in a heavily congested residential and commercial area requiring careful coordination and traffic control to minimize disruption to residents.

“Before the process started, we needed to take noise and vibration measurements to document what the ambient noise levels were, where we are tasked daily to keep our work activities within said levels,” said Jeremy Juarez, division manager for W. A. Rasic. “To do that we needed to install a noise cancelling system utilizing sound blankets to help minimize the noise that extends throughout our work area.”

Another key to the project was the installation of monitoring equipment, including extensometers and inclinometers – to ensure that settlement did not exceed limits defined by the owner. Rasic enlisted the support of Geocon for instrumentation. Additionally, the crew is incorporating a Red Meter system to provide accurate, real-time readings of boring slurries. The specialized mechanism is built in-line with the slurry pipeline; the abrasion-resistant Red Meter utilizes an industrial laser to analyze passing material, with the ability to share the data with LADWP in real-time.

Of course, during the construction of the project, Rasic had to deal with an unexpected challenge: completing the project safely during a worldwide pandemic.

“COVID-19 presented a real challenge,” Juarez said. “We needed to come up with protocol to coincide with CDC and CalOSHA regulations. The challenge became what happened if one of our crew members became infected – it as the potential to shut an entire crew down.”

Despite the challenges, Rasic has been successfully able to keep production on schedule for a September 2022 completion. To date, two of the five drives have been completed successfully. Another challenge looms, however, as conflicts with steel tie backs used to support adjacent buildings were found to potentially impacting the tunneling alignment. This will require Rasic to use a TBM with an open-face system to allow access to cut cables should the need arise.

When complete, the CTLS 3 Project will comprise approximately 25 percent of the City Trunk Line South system that will connect the Los Angeles Aqueduct Filtration Plant to the Franklin Reservoir.