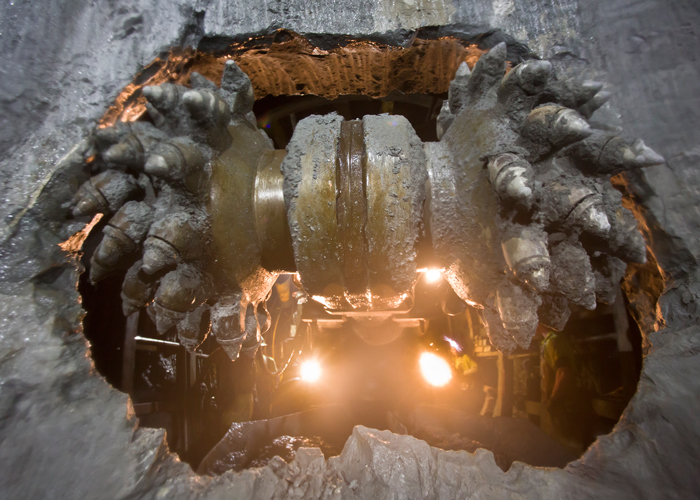 After two and a half years of digging hundreds of feet underground, two crews of miners finally reached their hard earned goal Oct. 8 – meeting up. San Francisco Public Utilities Commission’s (SFPUC) New Irvington Tunnel Project has holed through as a roadheader from one heading punched through hard rock underground to find air – and their fellow miners – on the other side.

“This project is a key part of our $4.6 billion Water System Improvement Program,” said SFPUC General Manager Harlan Kelly, Jr. “I cannot overstate the importance of this milestone and this project to the reliability of the Hetch Hetchy Regional Water System.” 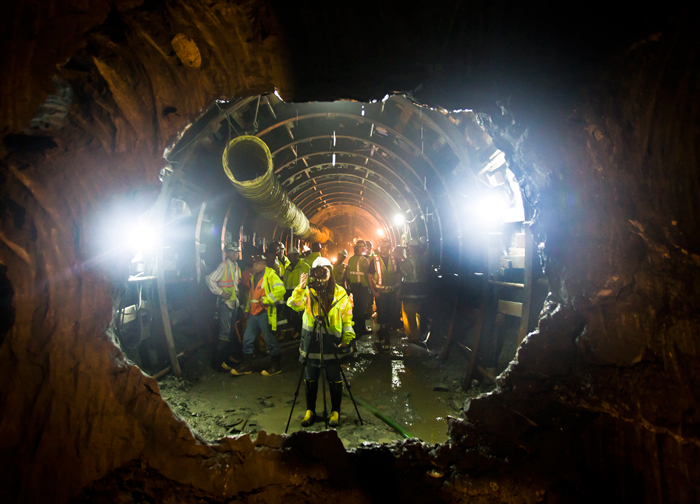 The new tunnel is being constructed next to the existing 81-year old tunnel, which hasn’t been taken out of service for maintenance since 1966. The New Irvington Tunnel will provide a seismically designed connection between water supplies from the Sierra Nevada Mountains and the Alameda Watershed to 2.6 million customers in four Bay Area counties.

This is not the typical way to mine a three and a half mile tunnel and I’m very impressed by how hard all of the crews have worked,” said Project Manager Robert Cornish of the contractor Southland/Tutor Perini joint venture. “It’s one thing to follow behind a tunnel boring machine for three and a half miles, but it’s quite another to mine that distance using drill-and-shoot and a roadheader through so many different types of ground material.” 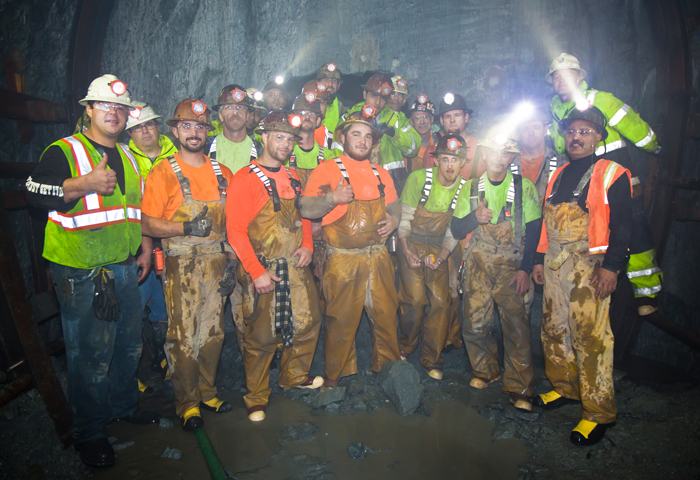 Workers celebrate the break-through of the New Irvington Tunnel on Oct. 8.

Crews excavated the tunnel using conventional mining methods, including a total of three roadheaders and controlled detonation in sections of hard rock. One mining crew has been steadily excavating its way under the mountain that separates Fremont from the Sunol Valley, while another crew started working eastward to meet them from the intermediate Vargas Shaft a month later. The two crews met Oct. 8 hundreds of feet underground.

“Today I can’t help thinking of what our predecessors who constructed the existing tunnel felt when they achieved final hole through about 80 years ago,” said Project Manager David Tsztoo. “They, too, worked under challenging conditions to ensure a reliable flow of drinking water to a growing population on the other side of that mountain. We are proud to be in such good company, and hope that our success will be celebrated 80 years in the future.”

“The miners and everyone involved really persevered to complete such a challenging tunnel,” noted Cornish of Southland/Tutor Perini.

“Our work on the tunnel isn’t over yet,” said Dan McMaster, Construction Manager from Hatch Mott MacDonald. “Final hole-through signifies a shift in tunnel activity to prepare for insertion of the final steel lining inside the 13 and a half foot excavated tunnel.”

The 8.5-ft diameter steel pipe is manufactured in California and installed in 50-ft segments inside the tunnel on railcar. Crews will weld the pipe sections together inside the tunnel, and then the crews will inject low density cellular concrete into the space between the steel liner and the tunnel wall to seal it off. Construction on the New Irvington Tunnel is expected to continue into mid-2015.

The $324 million New Irvington Tunnel Project is a crucial part of the $4.6 billion Water System Improvement Program. The program’s 81 projects will repair, replace, and seismically upgrade the Hetch Hetchy Regional Water System’s aging pipelines, dams, and reservoirs. The overall project is more than 70 percent complete, with the largest and most complicated projects, like this one, nearing completion over the next few years.