You are at:Home»News»First Pilot Tube Installation Completed in Mexico 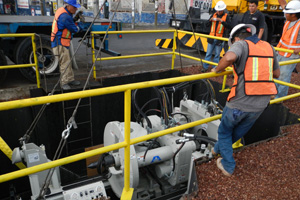 The Subcolector San Marcos project embodies the successful and accurate completion of the alignments, but more importantly, the culmination of several years of partnerships to educate, design, and procure equipment and pipe among many entities. Crews installed the 2,944-ft total in eight drives, ranging from 186 to 441 ft in length, from nine minimal depth and diameter shafts in the urban Plaza de Aragon, Ciudad Nezahualcóyotl municipality of Mexico City.