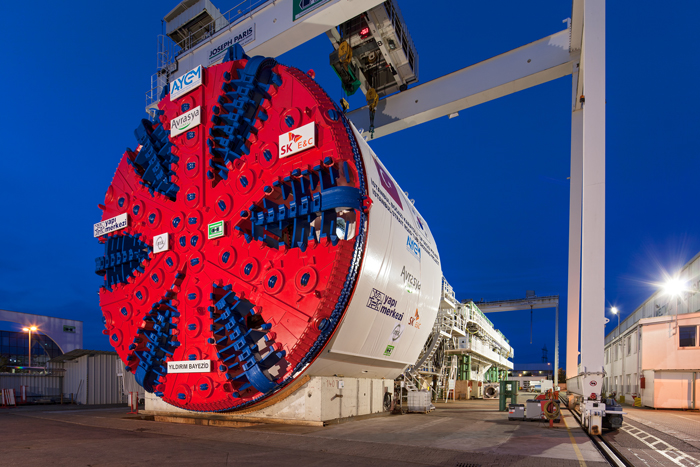 The 13.6-m diameter Herrenknecht Mixshield for the Istanbul Strait Road Tube Crossing Project was completed in early July 2013 in Schwanau.

To get from the European to the Asian side of Istanbul, people and goods have to cross the Bosporus Straits. So far, two road bridges as well as ferries provide the only transport link between the two parts of the city and the two continents. The tense traffic situation for the nearly 14 million residents of the city and for international transit traffic should be improved considerably thanks to the construction of a new road tunnel under the Bosporus.

“The project is certainly one of the most challenging tunneling operations currently being addressed in the world,” Herrenknecht project manager Georg Schleer said. The route of the Istanbul Strait Road Tube Crossing Project runs about 100 m below sea level at its deepest point. The interior diameter of the tunnel will be 12 m so that two lanes in each direction can be accommodated. They will extend one above the other on two levels. A total length of 5.4 km of tunnels is being created by a Herrenknecht tunnel boring machine that will begin its underground mission from a launch shaft on the Asian side.

“The machine’s engineering presented us with a real challenge,” said Georg Schleer, summarizing the starting situation for the engineers from Schwanau. “Even if the pressure is extremely high up front at the tunnel face, the client must be able to change the cutting tools quickly and safely if necessary.”

The result was a new type of cutting wheel, where time- and cost-consuming access for maintenance work under pressurized air can be reduced. The complete cutting wheel is accessible from the rear of the machine under atmospheric pressure. From there, all disc cutters and a large part of the cutting knives can be changed safely. In addition, the Mixshield is equipped with a special, newly developed lock system. It allows pressurized air access at well over 5 bar where necessary.

To detect strong material wear early and to tackle necessary maintenance accesses in a targeted manner, wear detectors are integrated into the excavation tools as well as in the steel construction of the cutting wheel. Moreover, the disc cutters are equipped with the Disc Cutter Rotation Monitoring (DCRM) system, which was developed by Herrenknecht. It provides data about the rotational movement and temperature of the disc cutters in real time to the machine operator in the control container. Thus, conclusions can be drawn regarding the condition of the tools and change intervals can be better planned.

In the Herrenknecht factory in Schwanau, Germany, the Mixshield was named YILDIRIM BAYEZİD in honor of a sultan who drove the expansion of the Ottoman Empire successfully forward at the end of the 14th century. After its dismantling, transport and assembly at the jobsite, the Herrenknecht Mixshield will start its tunneling work in Istanbul at the end of 2013. Following the opening of the tunnel, the new quick link between Europe and Asia will initially be operated for 26 years by the joint venture Avrasya Tüneli İşletme İnşaat ve Yatırım A.Ş. (ATAŞ) and subsequently handed over to the government of Istanbul.

The Bosporus was crossed with a tunnel boring machine for the first time in the years 2008-09. An earth pressure balance Shield (6,110 mm OD) from Herrenknecht was used for the construction of a water tunnel. In addition, a total of about 56 km of Istanbul’s metro is being built using machines produced in Schwanau.