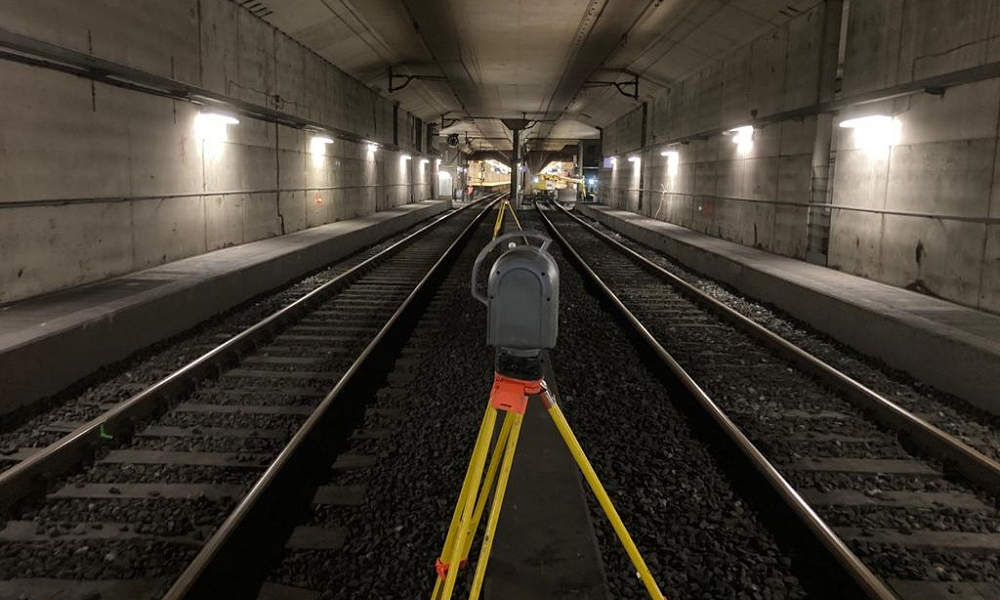 The Schiphol Tunnel is part of a 17-km passenger train route connecting central Amsterdam and Schiphol Airport, one of the busiest airports in Europe based on passenger volume. Millions of passengers pass through the Schiphol Tunnel every year and any interruption impacts passengers going to and from the airport, as well as trains en route to other cities in the Netherlands, Belgium and France. Safety and reliability are major priorities of the interconnected rail network.

ProRail is the government agency responsible for maintenance and expansion of the Dutch national railway. In 2020, ProRail commissioned GeoNext, a Dutch geodetic engineering firm, to survey the Schiphol Tunnel and build a comprehensive 3D model that could be used to plan repairs and infrastructure upgrades.

A highly accurate model was required to ensure proper alignment of new tracks and adequate clearance for the fast-moving passenger trains. The strict 7-mm or better accuracy requirement meant that GeoNext needed to use top-quality equipment and carefully follow workflow processes for efficient data collection.

Surveying the tunnel presented a combination of several unique challenges, such as the lack of GNSS underground, the 7-mm accuracy requirement, and the need to work around train schedules. Fast scanning was a necessity because access to the Schiphol Tunnel was restricted to pre-scheduled maintenance days.

GeoNext has extensive experience with laser scanning and rail surveying and owns several Trimble TX8 laser scanners, total stations, and GNSS base and rover systems. A laser scanner is well suited for fast and accurate surveying. The laser delivers a high point density and collects 1 million points per second, a major advantage when dealing with strict time constraints. Also, the rugged design of surveying instruments ensures reliable operations in a challenging environment like a tunnel.

“A laser scanner was a perfect device to scan more than one track at the same time,” explained Daisy Sparla, project leader at GeoNext. “The 360-degree scanner allowed us to set up in between the tracks and collect everything in that specific area. While the scanner was completing its scan, we had time to hang the next targets. It was a highly efficient process.”

Working in close cooperation, the GeoNext team collected around 750 scans with the total station, with a scan every 20 m and overlap of 5-10 m. Close scan station setup spacing and overlap between consecutive scans enabled GeoNext to reach the necessary 7-mm accuracy. The team surveyed the two 6.5-km dual-track tubes in just four weekends.

After scanning was complete, GeoNext utilized RealWorks software to process the scan data. The auto extract feature in the software helps identify targets and matching the scans. Bentley MicroStation Connect was used to build the complete 3D model of tracks and objects, and the point cloud was delivered in RD-NAP (Dutch coordinate system).

The speed of the scanner enabled the surveying team to meet the tough deadline.