On October 17, 1989, a 6.9 magnitude earthquake rocked the San Francisco Bay area, leaving behind extensive damage to homes, businesses, transportation infrastructure and public utilities. The “Loma Prieta” earthquake was viewed live by people worldwide who were tuned in to a World Series game between the host San Francisco Giants and their Bay Area rivals, the Oakland A’s, when the when the quake struck. 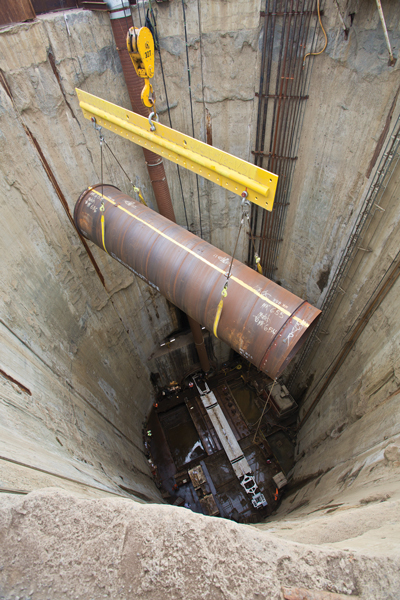 The $287 million Bay Tunnel, a 15-ft OD water tunnel, extends 5 miles under San Francisco Bay, and is the first-ever bored crossing of the Bay.

In the wake of the 1989 disaster, and in preparation for the next big quake that will hit the area, the San Francisco Public Utilities Commission (SFPUC), together with the advocacy efforts of the Bay Area Water Supply and Conservation Agency (BAWSCA) and its member agencies, began the process of rebuilding and upgrading its infrastructure system. Currently, SFPUC is in the latter stages of its $4.8 billion Water System Improvement Program (WSIP) that will ensure a seismically reliable water system for 2.6 million Bay Area residents.

Now 25 years after the Loma Prieta earthquake, the fruits of that labor are beginning to pay off. In fact, on Oct. 15, two days shy of the 25-year anniversary of the Loma Prieta quake, officials gathered at the Pulgas Water Temple, where the water from the Hetch Hetchy system in the Sierra Nevada Mountains enters the Crystal Springs Reservoir on the San Francisco Peninsula, to celebrate the opening of the new Bay Tunnel, one of the major components of the WSIP program. The Bay Tunnel extends 5 miles below San Francisco Bay, carrying water from the East Bay to the Peninsula, which replaces existing 90-year old pipelines that currently traverse the Bay.

The WSIP is one of the largest infrastructure improvement programs in the nation and the largest SFPUC has ever undertaken. It includes 83 projects — pipelines, tunnels, treatment plants, reservoirs and two dams, and is now 85 percent complete with most major projects completed or under way. The WSIP celebrated 10 years of construction early in 2014, and is on track to ensure that the regional water system that is part of the system that stretches 167 miles and crosses three major fault zones is up-to-date and capable of delivering water even after a major earthquake.

“The Bay Area is safer today than it was just a few years ago because of these projects going into service,” said Daniel Wade, Director of WSIP. “The U.S. Geological Survey reports that there is a very high probability of a major earthquake in the area within the next 30 years, so we are in a race against time. When that earthquake hits, completion of the WSIP will allow us to be in a position to continue to deliver water to 2.6 million people in the Bay Area who were previously at a significant risk of having a major disruption to the their water system.”

While many projects are complete, there is still a lot of work to be done. In fact, some $2.6 billion worth of projects are currently under construction. Most of the work is expected to be completed by the middle of 2016, with the exception of three projects, including the $718 million Calaveras Dam Replacement Project, the largest WSIP project, which is expected to be completed by the end of 2018.

“We have accomplished a tremendous amount to date, but we still have a ways to go to acheive our ultimate level of service goal that we established at the beginning of the program,” Wade said. 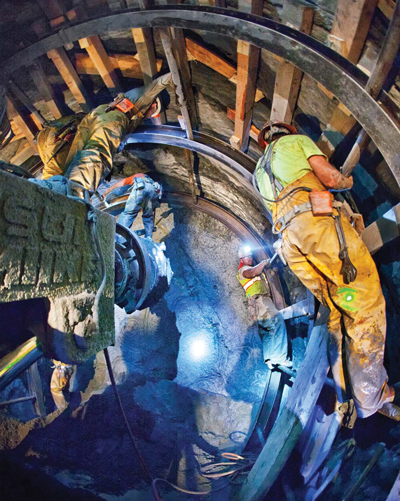 “The Bay Tunnel is one of the most impressive projects we have completed to date,” Wade said. “The project team did a tremendous job in proactively addressing all the technical challenges that come with building a 5-mile tunnel under the Bay. And it is not just one of our most high-profile projects, it is also one of the most important from a seismic reliability standpoint because the 1930s-era riveted pipeline that carried water across the Bay was in need of major repair or replacement.”

Alternatives to the bored tunnel included new pipelines across the Bay and new pipelines around the south of the Bay, but the tunneled solution was deemed the best option from a technical and environmental standpoint. “It wasn’t the cheapest option, but it as the project that would accomplish all of our goals,” Wade said.

The New Irvington Tunnel carries Hetch Hetchy water through the East Bay hills. It is a parallel tunnel that will increase the reliability of the water system by creating a redundant water transmission line. Importantly, the completion of the new tunnel will allow the old tunnel to be taken out of service for maintenance and repairs. Once the New Irvington Tunnel is in place, SFPUC can operate both tunnels simultaneously but can maintain level of service goals with either tunnel out of service.

The tunnel was built through difficult  and variable ground conditions including squeezing ground, shear zones, hard rock and soft ground, high ground water inflows, and potentially gassy conditions.  For these reasons, planners opted to use conventional mining techniques, including roadheader excavation and drill-and-blast, for tunnel excavation.

“There was a debate during the design phase about whether conventional mining was the right decision, and I believe the right decision was made at the end of the day,” Wade said. “There was significant concern that a TBM would get stuck because of the highly variable geologic conditions that were anticipated. The team has done a great job managing the issues as we have gone forward on the project.”

The contractor is Southland/Tutor Perini JV. URS and Jacobs Associates were the tunnel designers, while Hatch Mott MacDonald was the construction manager.

The other major tunnel component was the New Crystal Springs Bypass Tunnel in San Mateo County. The tunnel was completed using a 12-ft diameter TBM and precast segments at depths up to 160 ft below surface. It was built to replace an existing 8-ft diameter pipeline in an area prone to landslides. The new tunnel is built into the Franciscan bedrock below the landslide area, increasing the reliability of water supply. 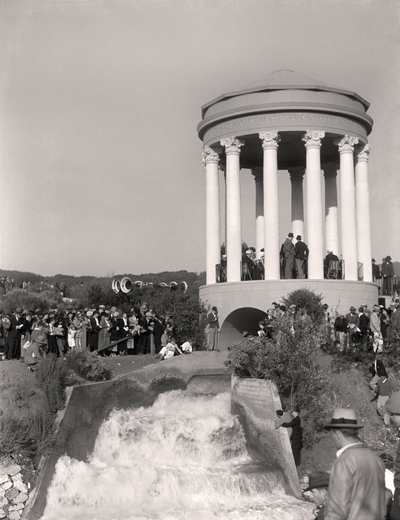 San Franciscans flocked to the Pulgas Water Temple in October 1934 to mark the arrival of Hetch Hetchy water on the San Francisco Peninsula. In October 2014, officials marked another ceremony on the same spot to commemorate the arrival of water through the Bay Tunnel.

Looking Back
Managing a $4.8 billion program that involves 83 projects built over the course of one and a-half decades takes careful planning and a coordinated effort.  For SFPUC, it began with agreeing on the program definition. “When you have a system that is aging and in need of repair and seismic upgrades, there is a long list of things that the various stakeholders would like to see happen,” Wade said. “So, getting everyone on the same page both internally and externally as to what the program definition should be was something we did early on and I believe it is one of our major accomplishments. By getting everyone to buy in to the level of service goals upfront, we were able to really focus in on the projects that needed to be part of the program to meet those goals.”

Moving Ahead
Now that the WSIP is entering its wind-down stages, it doesn’t mean that SFPUC can rest easy. In fact, the SFPUC is in the early stages of the Sewer System Improvement Program to address reliability of the wastewater system over the next 20 years. Additionally, the WSIP addressed water infrastructure in the Bay Area, so planners are now addressing needs in the Hetch Hetchy and upper part of the water delivery system.

“We need to ensure that we upgrade the upper reaches of the Hetch Hetchy system so that we can maintain the level of service that we promised to our rate-payers as part of WSIP,” Wade said.

When the WSIP is complete, Bay Area residents can be assured of a safe and reliable water system now and for the future.