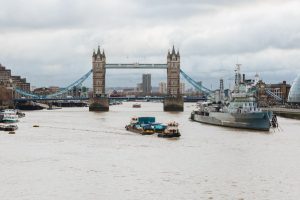 Tideway, the organization building London’s new super sewer, on Nov. 27 welcomed the arrival of the first of its six tunnel boring machines (TBMs).

The Herrenknecht TBM, which when fully assembled will weigh a total of 1,350 tonnes, will make its way through central London along the iconic River Thames having made the 850-km journey by barge from Kehl, Germany, where it has undergone rigorous testing.

The Thames Tideway Tunnel, a major infrastructure project, will tackle sewage pollution in the River Thames and will use six machines to build the 25-km tunnel. Tideway has pledged to transport over 90% of materials by barge, including the TBMs, which will reduce the number of road vehicle journeys needed to build the tunnel by more than 300,000. Use of the river will also boost the number of jobs on the river, with the project delivering around 4,000 jobs in total.

Andy Mitchell, Tideway’s Chief Executive Officer, said: “The arrival of our first TBM marks a major milestone for the construction of London’s super sewer and it also demonstrates our commitment to use the river to transport materials and reduce the number of vehicles on London’s roads.

“Our vision is to reconnect London with the River Thames and, by practicing what we preach, we want to demonstrate the huge potential of our city’s greatest natural asset.”

Deputy Mayor for Environment and Energy, Shirley Rodrigues, said: “This marks an important step in the delivery of this much-needed piece of infrastructure.

“The Thames Tideway Tunnel will modernize London’s ageing sewage system and dramatically improve the environment by reducing the amount of sewage overflowing into the river.”

To make the journey from Germany by barge the TBM had to be dismantled and over the next few months it will be reassembled at Tideway’s Carnwath Road site in west London.

The TBM will be named Rachel, after Rachel Parsons, an engineer and advocate for women’s employment rights, who set up the first women-only engineering company in Fulham.