You are at:Home»News»Tully/OHL, Robbins Team Up to Complete Harbor Siphon Tunnel 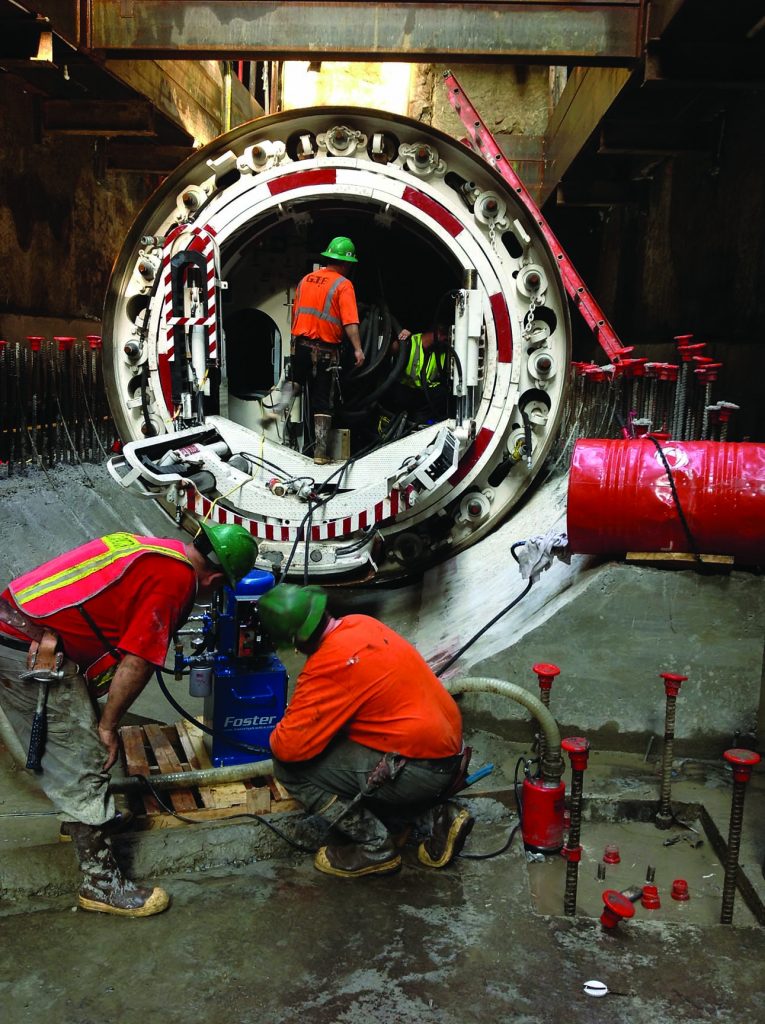 The EPB, originally manufactured by CAT, was launched in August 2012 for the Tully/OHL JV.

On Jan. 28, 2015, about 115 ft below New York Bay, a celebration was underway as Sandhogs, along with workers for subcontractor Tully/OHL and Robbins field service, completed the last meters of the Harbor Siphon Tunnel connecting Staten Island and Brooklyn.

The team had many reasons to celebrate—not only had their TBM just completed a much-needed undersea tunnel, but it had also done so after a near-catastrophic natural disaster, extensive rebuild and geologic complications.

The New York City Harbor Siphons Project began simply enough — the 1.8-mile long tunnel was designed to replace two existing shallow water lines below the bay. The project, managed by the New York City Economic Development Corporation (NYCEDC), replaces the lines with the deeper siphon in order to make way for a larger project — the dredging of the Anchorage Channel. The channel (part of New York Bay) is an important waterway for shipping, and its dredging will allow for mega ships carrying large cargo loads to pass through.

Tully/OHL USA JV procured a 3.8 m (12.5-ft) diameter EPB TBM from Caterpillar in 2012. The TBM, dubbed “Pat,” was designed to drive through highly variable clays, sands, weathered rock and boulders. It was launched from the 115-ft deep Staten Island shaft, boring toward the 131-ft deep Brooklyn shaft, in August 2012. 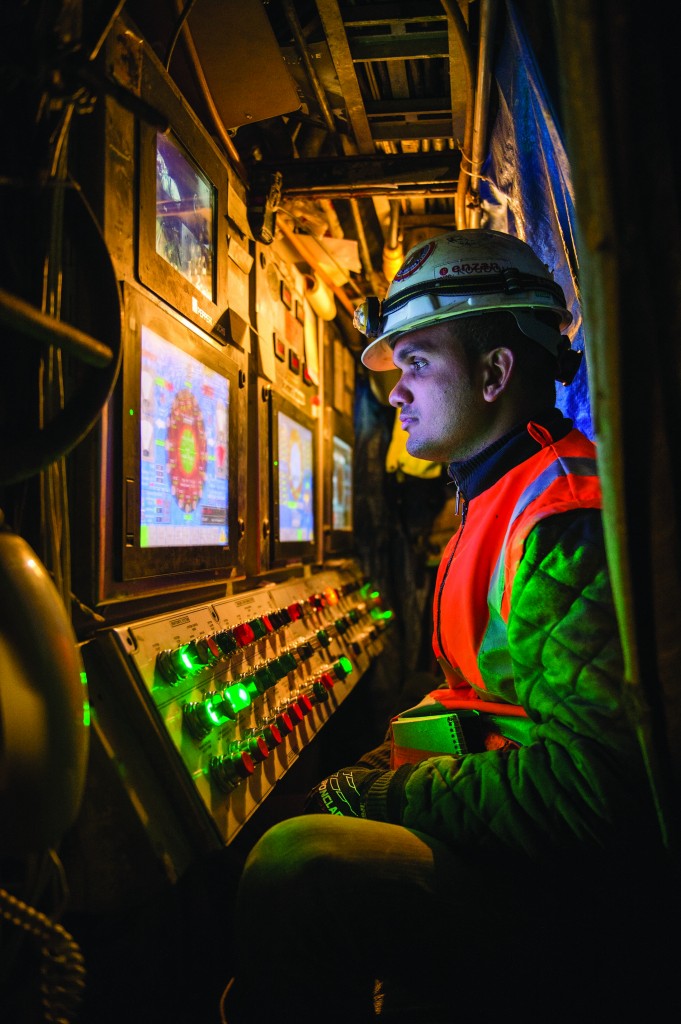 The Robbins Field Service Team replaced all electronics systems, rebuilding much of the CAT-manufactured EPB from scratch.

In October 2012, the unexpected happened: a massive hurricane, dubbed Superstorm Sandy, barreled down on the U.S. East Coast with winds up to 90 mph. Extreme flooding at the waterfront jobsite in Staten Island overtopped protective concrete barriers that had been designed 3 ft above the 100-year flood level. Seawater rushed into the tunnel and the nearly 370-ft long machine was entirely submerged only 1,500 ft into its drive. “Obviously this was our biggest challenge,” said Luis Alonso, Tunnel Manager for OHL. “After that, not many people thought we would be able to finish this tunnel.”

After floodwaters began to recede, OHL set about determining the extent of damage on the machine. The TBM was severely corroded by saltwater and sat idle until July 2013. During that time, CAT announced its impending closure of its TBM business, and the contractor looked to other manufacturers. “OHL was always determined to finish this project. After studying other options, we decided to proceed with the full refurbishment of the TBM with the help of The Robbins Company. The whole crew worked together to achieve that goal,” said Alonso.

Robbins coordinated the effort to replace corroded hydraulic components and all new electrical systems in mid-December 2013. Electrical systems had to be reverse-engineered, while the PLC had to be entirely redesigned. The refurbishment also centered on removing the rear 11 gantries and belt conveyor to be cleaned, evaluated and repaired. The rebuild took about four months, much of it done in the tunnel under water pressure, and crews were able to return to mining on April 14, 2014. 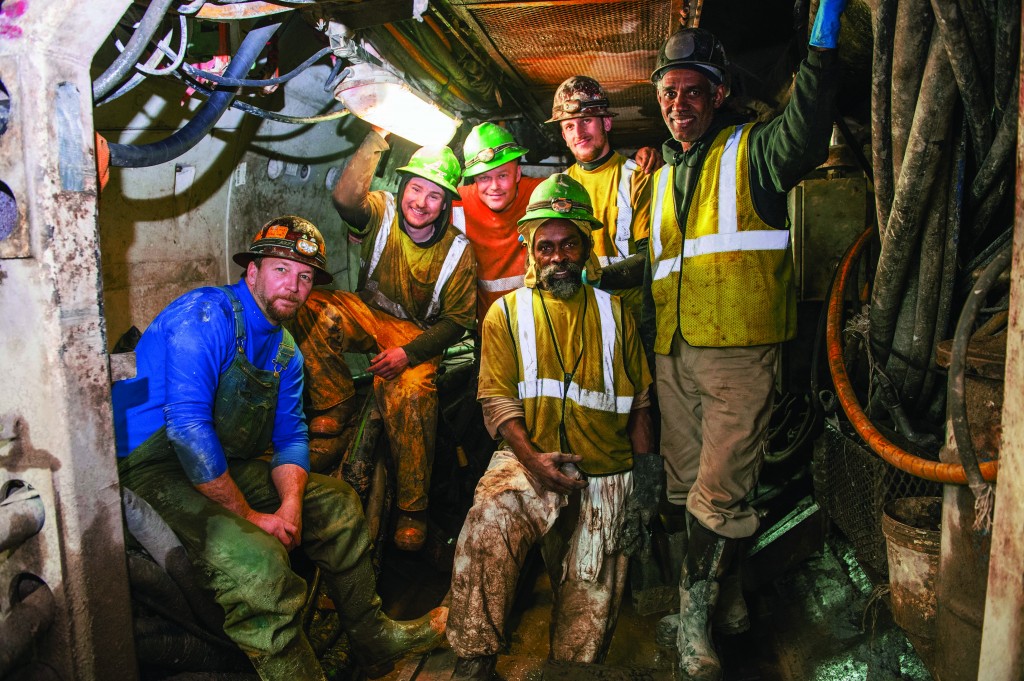 Workers from the local tunnelers union, known as the Sandhogs, celebrate as the EPB breaks into the slurry wall of the exit shaft.

To ensure that the project progressed successfully, Robbins field service personnel remained onsite to support ongoing maintenance of the TBM. With their help, machine performance steadily increased, eventually reaching rates as high as 100 ft per day and as much as 25 rings in 24 hours in August 2014.

As excavation picked up, ground conditions changed from marine sediments (clay, silt and sand) to glacial geology with sand, exceptionally hard boulders, and excessive water ingress, resulting in slow propulsion rates. “The TBM needed more thrust and we decided to implement four additional auxiliary cylinders. Robbins field service helped in developing the size, features and location of the cylinders, which were eventually placed in the lower quadrant of the propulsion system,” said Alonso. 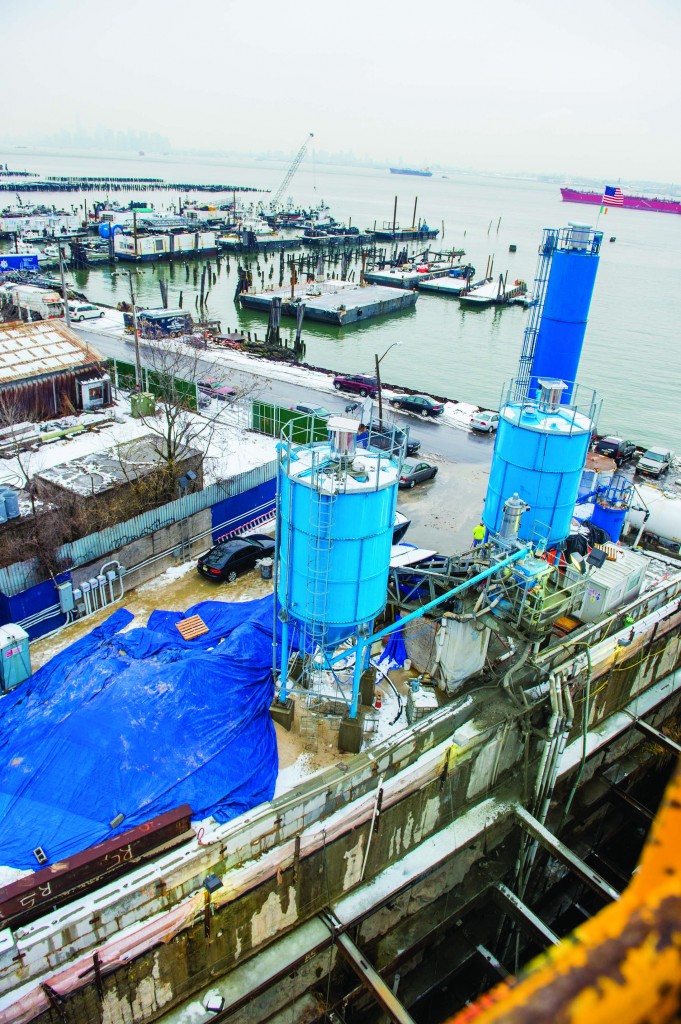 The successful project overcame multiple obstacles—flooding at the harbor-side jobsite overtook 100-year flood barriers and submerged the machine in 2012.

With the new system, crews were able to re-establish forward progress. The constant hurdles continued into early October when a hyperbaric intervention at 4 bar of pressure was required to change the cutting tools in a pocket of glacial soils. Despite the new obstacles, the crew was able to steadily increase the rate of excavation to 5 to 7 rings per day.

“This tunnel is an important part of a larger project, and we are proud to be doing what we do every day, dealing with troubles as they come up, until we reach the end of the drive,” said Alonso.

Now that tunneling is complete, the stationary and tail shields will be buried at the exit shaft entrance, with the cutterhead and back-up being removed.