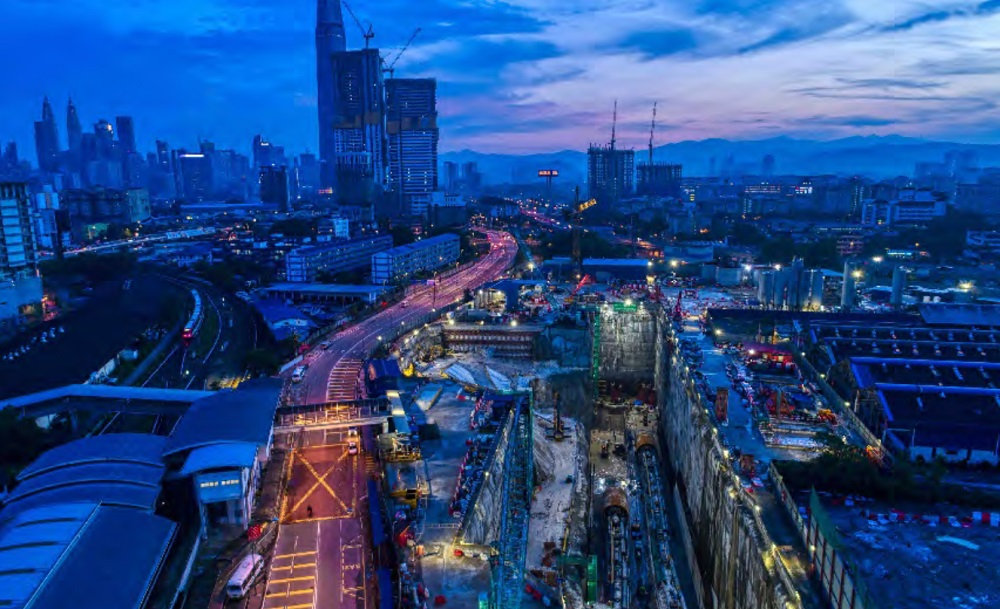 On Oct. 11, 2020, the last of the tunnel ring making up the 13.5 km-stretch of the Klang Valley Mass Rapid Transit (KVMRT) twin bored tunnels was completed. Part of a 52-km alignment known as the Putrajaya Line, it is the second extension to the first Kajang Line, and also Malaysia’s first metro network meant to connect satellite towns to its capital city, Kuala Lumpur (KL).

The job required 8 variable density (VD) tunnel boring machines (TBMs), 4 earth pressure balance (EPB) TBMs, 16,000 tunnel segment rings and thousands in workforce for the construction of 11 underground stations — doubling as TBM launching and retrieval shafts — and other ancillary structures. It is no small feat, bearing testament to the ingenuity of its builder, Gamuda Engineering (GE).

Stoked by their debut success with the timely completion of Kajang Line’s underground section, GE found themselves pitted once more against the unique challenges of tunneling in Kuala Lumpur. In the Kajang Line, there were 7 underground stations and 9.5 km of twin tunnels involved, many of which were nestled in Kuala Lumpur’s notorious karstic limestone. This time around, the Putrajaya Line tunnels are deeper, with more complex geological interfaces between Kenny Hill, KL limestone and even an abrasive granite region — not present on the Kajang Line — where frequent, almost daily stops were required to replace worn TBM cutting tools and carry out preventative maintenance.

Other than the more complex geology, the Putrajaya Line tunnels also traverse close to critical infrastructures, such as major railway lines, elevated transits, and even their past projects, the Stormwater Management and Road Tunnel (SMART) as well as the Kajang Line tunnels.

Despite all the above, the entire Putrajaya Line is on track for full opening by January 2023. In fact, GE has been undeterred when it comes to achieving what was often deemed impossible. Leading tunnel specialist, Gusztáv (Gus) Klados, with up to 50 years of industry experience under his belt, describes the phenomenal growth of GE whom he has been with for almost 20 years. “When we started with the Stormwater Management and Road Tunnel (SMART) project in 2002, a lot of people told us we were crazy, we can’t build a tunnel in the middle of KL.”

Yet, with adequate preparation and collaboration with TBM manufacturer, Herrenknecht, where GE engineers experienced first-hand how to assemble a TBM, the job was delivered excellently. They even got ahead of their German counterparts who were in charge of the Northern tunnel section.

“Once we were awarded the construction of Line One (Kajang Line) tunnels, we had to build on the capabilities of the people who were with the company and nurture local knowledge and talent,” Gus says. In fact, it is with such capabilities and commitment to the task, that the VD TBM, was developed to tackle the challenging geology of the Kajang Line.

Gamuda Engineering Head of Tunnels, Ng Hau Wei, adds, “Continuity of the project from SMART, to the Kajang Line and now to the Putrajaya Line definitely kept us in momentum, but it ultimately boils down to having the right set of people and the best machines.”

The “best machines” does not only stop at the VD TBM. In the Putrajaya Line, GE stepped up their game further, breaking the frontiers of construction technology with the introduction of the world’s first autonomous tunnel boring machine system. Dubbed ATBM, the system was plugged into 10 of the TBMs used in the Putrajaya Line to boost overall productivity, safety and quality of tunnel construction using artificial intelligence.

“With the VD TBM, we could switch between multiple slurry and EPB modes with ease in a single drive. With the ATBM system, the possibilities are endless as we now have supervision over tunneling parameters and operations for multiple machines simultaneously, at the speed and accuracy of a computer,” Ng says.

As for the “right set of people,” both Gus and Ng commend the aptitude and agility of GE’s expertise with project management. In one example, a TBM (S-777) was initially intended for a tunnel drive between two stations only. Due to unforeseen delays, a recovery plan was introduced: upon breakthrough at its original destination, the TBM was pulled across the station box and launched from the other end to make up for lost time. The scheme proved successful as their impressive project milestones have shown.

Another example is the management’s commitment to staying ahead of the COVID-19 crisis amidst construction. Many control measures were strategically applied early on throughout the mega project and has proven successful in safeguarding their workforce from possible breakouts.

The contractor’s capabilities even extend to that of tunneling machinery. The Putrajaya Line tunnels were in fact built with several TBMs from Kajang Line refurbished by the contractors themselves. “As we speak, 11 TBMs from the Putrajaya Line are already being carefully stored and maintained at our refurbishment facility in anticipation of upcoming tunneling projects,” said Ng.

With the remainders of the Putrajaya Line underground station construction fast closing on us, Gamuda Engineering is ready to move on to other complex tunneling projects, be it in Malaysia or elsewhere. As Gus sums it up “our technical knowledge is convertible … there will be other places where we have an opportunity and we will have a good chance of getting jobs.”