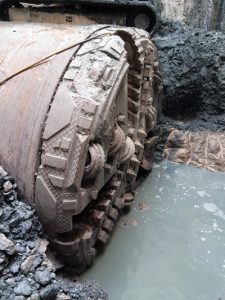 The launch shaft on Virginia Key with a diameter of only 40 ft saved space. As a result, the TBM had to begin the drive in pipe jacking mode using a jacking frame adapter. The back-up section was only assembled after the first 100 ft of tunneling.

TBM tunneling is relatively new to South Florida, but that hasn’t stopped area owners from taking on – and successfully completing – technically challenging projects in the Miami area. The Port of Miami Tunnel, built by the Florida Department of Transportation, was a high-profile job that involved building a highway extension under Biscayne Bay, linking Watson Island and Dodge Island while not impacting the operations of a major port. That project involved the largest soft-ground TBM used in North America at the time.

While not as large or high-profile as the Port of Miami Tunnel, the Norris Cut Tunnel for the Miami-Dade Sewer and Water Department overcame its share of challenges in constructing a sewer forcemain connecting Fisher Island and Virginia Key.

The Norris Cut Tunnel involved the construction of a mile-long, 10-ft diameter tunnel approximately 100 ft under the channel to provide redundancy for an aging prestressed concrete cylinder pipe (PCCP) built in 1977 that conveys flow from Miami Beach to Miami-Dade’s Central District Wastewater Treatment Plant on Virginia Key. A condition assessment in 2012 identified numerous pipe segments with distressed pre-stressed bands. Because this forcemain is a portion of the sole pipeline that collects raw sewage from Miami Beach and northern municipalities and transmits it to the plant, it must remain in continuous operation during this replacement project.

The ground conditions represented the biggest challenge to project staff in designing and constructing the tunnel. The karstified, permeable geology posed the risk of flooding the tunneling machine, while the complex Fort Thompson formation contained sand-filled cavities that could result in an instable tunnel face.

To deal with the variable conditions, the project team opted for a Herrenknecht Combined Shield that is capable of operating in slurry or EPB modes, depending on the ground conditions (slurry in rock conditions and EPB for areas of sand that could collapse the face). In the end, the TBM operated in slurry mode for about 90 percent of the alignment. The TBM was also equipped with a pressurized chamber to allow tooling changes and prevent the machine from flooding.

The 40-ft diameter launch shaft on Virginia Key was constructed using secant piles approximately 95 ft deep with a tremie slab at the bottom. Once the shaft was excavated, a frozen block was created for the launch area and an internal ring beam was installed to provide additional support.

The 85-ft deep, 30-ft diameter retrieval shaft on Fisher Island was built using the soil-cement mixing method. This method had the benefit of mixing cement onsite, therefore eliminating the need to truck pre-batched concrete to the island, which is accessible only by boat. Soil mixing had the added benefit of allowing the shaft to be excavated in the dry. To provide additional support during break-in, crews backfilled the shaft halfway with loose soil, and filled the rest with water to maintain hydraulic head. 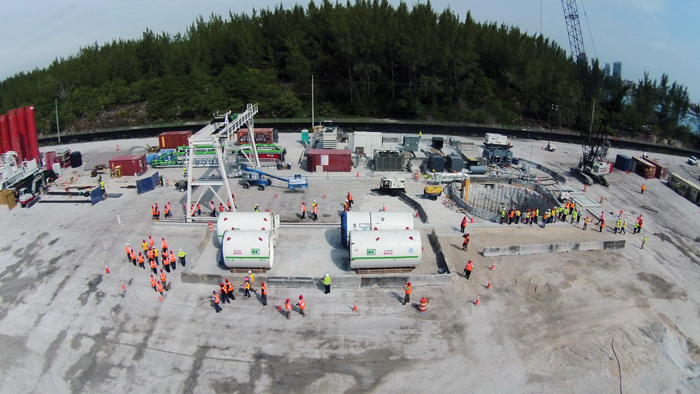 In February 2016, the TBM reached the target shaft on Fisher Island to allow for a 60-in. sewer line to be installed.

The TBM began its drive near the treatment plant on Virginia Key in April 2015. In order to keep the shaft footprint small and expedite the launch of the machine, the project team opted to use conventional pipe jacking for the first 100 ft of tunnel. At this point the TBM began erecting tunnel segments, thrusting off of the pipe jacked tunnel. This approach eliminated the need to build a starter tunnel for the TBM.

At a depth of up to 70 ft below sea level, the 10-ft diameter TBM dug its way forward in the months that followed. After 227 working days came the breakthrough on Fisher Island on Feb. 16, 2016, with top performances of up to 80 ft per day and about 1,000 ft per month. Progress in the first half of the drive was slowed by mixed-face conditions, but the second half provided more consistent rock conditions that aided production rates.

For the breakout, crews used as little pressure as possible to bore the final feet and through the unreinforced soil-cement mix wall to avoid any overbreak on this critical connection. Once through the wall, a resin grout was injected through the TBM to provide a watertight seal and the final can of the TBM was left in place.

The successful drive on the Norris Cut project has pushed the boundaries of what is possible in Florida’s tunneling industry and contributed to its further development: “The project has set standards for work in Florida’s underground and showed solutions for deep sewer lines in the porous Fort Thompson formation,” said Bernard Theron, President of Bessac.

Upon completion of the tunnel, crews installed 60-in. diameter Hobas pipe to serve as the final carrier pipe. Pacific International Grout Co. was brought in to install cellular concrete to backfill the tunnel and shafts. A low-cost, low-density cellular concrete was engineered and used to backfill both shafts after risers were installed. The shaft backfill was engineered to produce low heat of hydration and be water resistant.

Terrence Carroll, geotechnical engineer with Arup, said that the collaborative design-build approach was a key factor in the successful completion of the project. “We developed very strong relationships that allowed us to work through the design challenges and construction challenges,” he said. “It was a good team effort.”