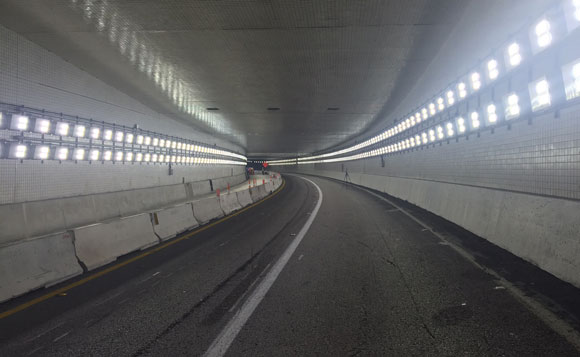 Well-designed tunnel lighting systems facilitate the safe operation of vehicular traffic, in the tunnel, during both daytime and nighttime conditions.

The Lytle Tunnel is a three-tube, six-lane tunnel that carries I-71 under the Lytle Park Historic District in downtown Cincinnati. It is one of the very few vehicular tunnels in the state of Ohio, and the Ohio Department of Transportation (ODOT) is just completing an overall two-year, $32.3 million upgrade to its wall tiles, ventilation system and tunnel lighting system. Specifically, the lighting renovation involved upgrading the existing high-pressure sodium (HPS) lighting to LED.

Though entrenched in the general lighting marketplace for several years now, LED technology has taken a while longer to proliferate in the very specific market of vehicular tunnel lighting. Very few vehicular tunnels in North America to date have been illuminated with LED light fixtures. This is largely because cost-effective LED lighting that met the typically stringent tunnel lighting standards was, until more recently, unattainable. However, with the rapid advances in LED technology over recent years, owners and specifiers of North American tunnel lighting projects have now adopted LED lighting as the standard. This article we will examine the key considerations of the tunnel lighting application in general, as well as how LEDs were utilized in the design and subsequent value-engineering of the Lytle Tunnel lighting.

There are many factors to be considered during the course of a tunnel lighting design. Well-designed tunnel lighting systems facilitate the safe operation of vehicular traffic, in the tunnel, during both daytime and nighttime conditions.

Key to this safe operation is designing a lighting system such that the “visual perceptions” of drivers will not be adversely affected when approaching, entering, traveling through and exiting the tunnel. It should be noted that tunnel lighting design is based on the metric of “luminance”: in this case, the total amount of luminous flux perceived by the driver as reflected off the various tunnel surfaces, at a particular angle, at a fixed distance. Luminance for tunnel lighting is calculated and measured in cd/m2. The metric of Luminance far better correlates to the needs of drivers in a tunnel, and to the idea that the visual perceptions of drivers are vital and must be properly maintained while traveling through the tunnel.

During nighttime conditions, the luminance level in a tunnel should be constant and equivalent to the luminance level on the roadway leading into the tunnel. Conversely in daytime conditions, there is a high level of ambient light outside the tunnel; accordingly, it is necessary to increase the luminance levels at the tunnel entrance so as to avoid a potential “black hole effect” (suddenly going from bright ambient sunlight to total darkness) and a resulting loss of drivers’ visual perception. When drivers enter a tunnel during the daytime, the concept of a driver’s visual perceptions effectively drills down to an issue of “visual adaptation,” i.e., how (and how well) the eyes adjust and adapt to their surroundings.

Based on visual adaptation, an effective tunnel lighting design breaks the entire length of the tunnel down into different lighting “zones” as referenced in ANSI/IES RP-22 Recommended Practice for Tunnel Lighting. The area immediately inside the tunnel portal is known as the “Threshold Zone.” When approaching the tunnel entrance, the average luminance in the driver’s field of vision decreases; yet within this field of vision, the percentage of space occupied by the tunnel entrance increases as the driver approaches it. In order to maximize the driver’s visual adaptation at this first part of the tunnel, the Threshold Zone should be highly illuminated over a distance equal to one “safe stopping distance,” for the tunnel’s design speed, minus the adaptation distance. Naturally, the safe stopping distance will increase as the tunnel’s design speed goes higher. Regardless, good Threshold Zone lighting will help a driver to better see objects inside the tunnel, prior to actually entering the tunnel.

The “Transition Zone” is the next part of the tunnel immediately following the Threshold Zone. This is an area where the level of luminance is gradually reduced, from the typically very high levels required in the Threshold Zone down to a minimal level required in the Interior Zone. The Transition Zone essentially serves to provide an acceptable curve for controlling visual adaptation once inside the tunnel.

The area of the tunnel after the end of the Transition Zone is called the “Interior Zone.” By time the driver reaches the Interior Zone (and assuming the tunnel is long enough), eye adaptation has become complete; accordingly, luminance is reduced in the Interior Zone to a lighting level that is minimal but still safe for the driving task. The “Exit Zone,” less critical in terms of visual perception, may be illuminated slightly higher than the Interior Zone in order to assist drivers’ adaptation in exiting the tunnel and returning to bright ambient luminance just outside the exit portal. Providing higher luminance levels at the end of a tunnel depends upon several factors including: the tunnel’s physical orientation to the sun; geometry of the tunnel exit; and length of tunnel leading up to the Exit Zone.

In the Lytle Tunnel Project, the recommended luminance levels in the three tubes’ Threshold Zones are no higher than 250 cd/m2. Further, the three tubes are each short enough (roughly 850 ft long, +/-) that, based on the posted speed limit, there is no Interior Zone; the driver would be out of the tunnel before ever reaching an Interior Zone. As such, the three tubes are all Threshold Zone and Transition Zone tunnels, and therefore require a lot of light fixtures to do the job. ODOT’s original tunnel lighting design included a project total of 2,402 luminaires across the three tubes, in various outputs including 300W, 200W and 100W. Further, the design was done in such a way that three different prominent tunnel lighting manufacturers would be specified to meet the Project Specifications and Lighting Criteria.

Kenall’s VE Proposal due to the savings gained in both material and installation costs as well as future maintenance costs.

The selection of Kenall’s LuxTran LTSI luminaires reduced the total number of project fixtures required from 2,402 to 1,317, reducing the initial investment for ODOT and yet still meeting the Project Tunnel Lighting Criteria. Kenall VE Fixtures were standardized on just one type: a nominal 300W output, as opposed to the multiple output types included in the original design. Having fewer fixtures in service will also save millions of dollars in operating/energy/maintenance costs over the next decades of service.

In a February 2017 in The Electrical Distributor Magazine, Marvin Schultz of Becker Electric Supply said, “They [Kenall] helped us out with the design. It was a group effort to find the right solutions. It takes a lot of time to get any government organization to accept changes to original plans, but we succeeded. Kenall enabled us to replace the LED modules and drivers easily to maintain the fixtures.”

The controls-compatible LuxTran LTSI luminaires are now fully operational and reactive to outside light levels, which is critical for driver safety. Schultz added, “Light levels in tunnels are important and uniformity is critical because people are driving through them at 55 mph. It’s a combination of dimming at certain hours for energy savings and reducing or increasing light levels based on time of day.”

The Lytle Tunnel Project Lighting VE Proposal and subsequent installation was a win-win for all involved.

Michael N. Maltezos, MIES, is Transportation Sales Manager with Kenall and may be reached at 847-507-4531 or [email protected] Gurnee, Illinois-based Kenall produces and supports high quality and durable lighting solutions for the most demanding environments. Kenall products are manufactured in the United States and meet the guidelines established under the Buy American Act and the North American Free Trade Agreement. For additional information, visit www.kenall.com.