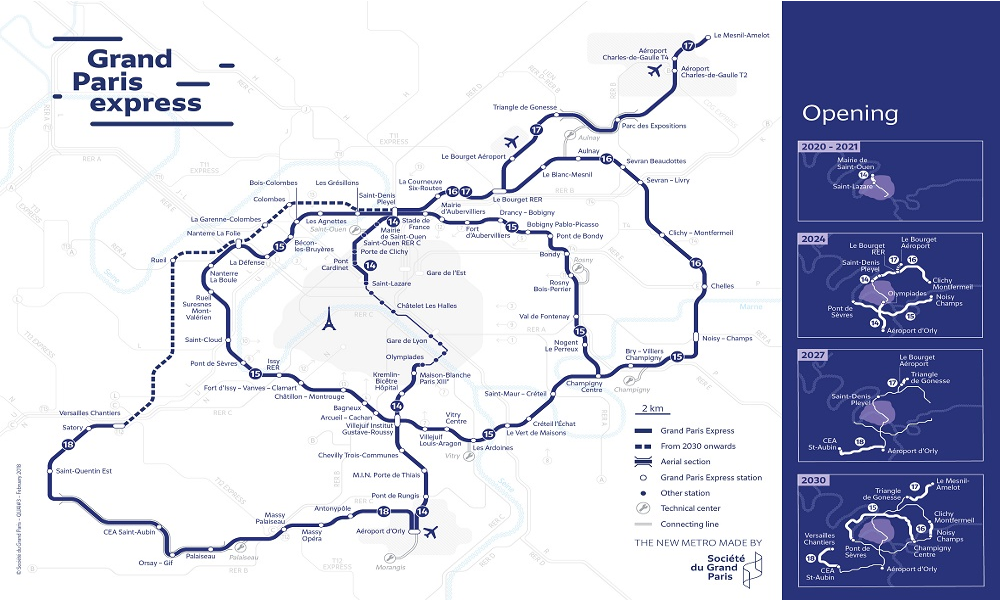 Webuild and its local partner celebrated the breakthrough of their tunnel-boring machine (TBM) near the end of its underground journey of 4.05 kilometres to help extend Line 14 South in southern Paris for Europe’s most ambitious sustainable mobility project: the Grand Paris Express.

The TBM, named Koumba, broke through the wall to arrive at the Europe shaft to the applause of scores of attendees, including representatives of Webuild, Nouvelles Générations d’Entrepreneurs (NGE), Webuild’s partner on the project, and the client, Régie Autonome des Transports Parisiens (RATP).

Since it began work a little more than a year ago at Puits de Morangis, the 850-tonne TBM has excavated up to 20 metres below Orly Airport as well as set a record by doing 671.47 metres in only 31 days.

Line 14 South will improve connections and travel times between the airport and the city centre by linking the airport to Line 18 of the existing metro network and a new line to be called Line 15.

Webuild is working on another part of Grand Paris Express: Line 16 to the north of the city centre.

The Grand Paris Express is extending the French capital’s metro and light rail network by 200 kilometres and 68 stations to improve connections between the centre and the periphery. It is designed to improve the local economy, promote sustainable mobility and reduce vehicle traffic and air pollution as Paris pursues its goal of becoming carbon neutral by 2050.

With a combined track record of more than 13,637 kilometres of rail and metro lines over the span of 114 years, Webuild is a major contributor to the development of urban and extra-urban mobility, supporting efforts to reduce traffic and pollution by offering safe, efficient and environmentally friendly public transport services.

Line 14 South is one of a number of projects that highlight Webuild’s presence in this sector. The Group is involved in the construction of metro lines in cities like Milan and Riyadh, and light rail transits in Perth and near Toronto.

Webuild’s strategy to contribute to client’s efforts to develop sustainably has led to the Group earnings higher ratings for Environmental, Social and Governance (ESG) solutions by as MSCI (Morgan Stanley Capital International) ESG Research, Vigeo Eiris (Moody’s Group) and others.