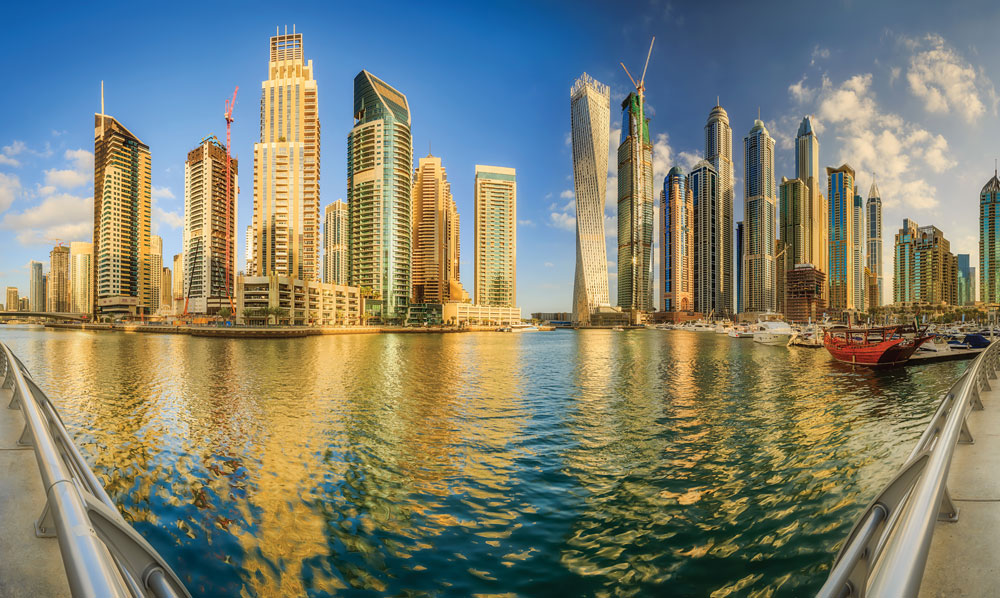 Held in Dubai, from April 21-26 by the Society of Engineers (SOE) and the International Tunnelling and Underground Space Association (ITA), the World Tunnel Congress and 44th ITA General Assembly were a momentous occasion and an undoubted success for the global industry.

Focused on “The Role of Underground Space for Future Cities,” the World Tunnel Congress shed light on the sustainable aspects of developing underground construction. The challenge faced today by many key players of the industry (engineers, urban planners, architects) when building new underground facilities is to fully respect the surrounding nature.

The opening ceremony was well attended by VIP guests, delegates from government and private sectors, presidents of international engineering associations, representatives from major engineering and tunneling companies, as well as key stakeholders in tunneling industry from all over the world.

Inaugurated by Eng. Dawoud Al Hajri, Director-General of Dubai Municipality and President of the Society of Engineers, and Prof. Tarcisio Celestino, ITA President, the ceremony was highlighted by lectures and speeches from leading experts. The Muir Wood Lecture was given by Edward Cording and the Landmark Lecture on Roman underground road network in Naples was given by Stefano de Caro. Eng. Suleiman Abdelrahman Alhajri also gave a lecture on major works ongoing in the United Arab Emirates (UAE). 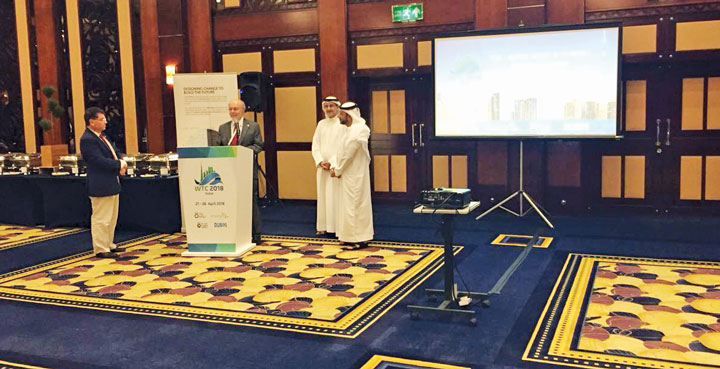 “The United Arab Emirates has always been a pioneer of development in the region, especially in the field of tunnels and the use of underground space, with a number of ongoing mega-projects. We are honored to be the first country in the Middle East to host the World Tunnel Congress. We welcome all the academics and the specialists in the field, who will be sharing their knowledge to upgrade the engineering sector in the UAE, and the tunnel sector in particular,” Alhajri said. 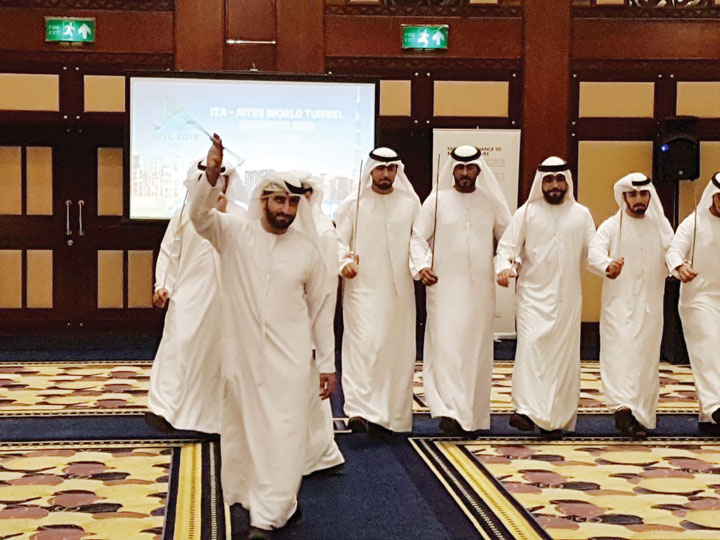 Traditional dancers were part of the gala banquet dinner.

From this point flowed with presentations, working groups and seminars, including 125 technical papers presented orally and 60 posters. During the 44th ITA General Assembly, Copenhagen was chosen to host the World Tunnel Congress in 2021. Next year it will be in Naples, Italy, and in 2020 in Kuala Lumpur, Malaysia.

The International Tunnelling and Underground Space Association’s Committee on Underground Space (ITACUS) technical session highlighted various innovative concepts including those presented by the Young Professionals’ Think Deep Programme, such as a virtual reality model of hard rock wastewater tunnel used in Stockholm. Also, the digital twin tunnel presented by Karin Dehaas showcased the potential benefits of a fully digital tunnel, allowing to identify with precision the surrounding environment and to share data to predict aging behavior, malfunction or failure, in order to preserve the existing nature around underground constructions.

For this edition, Han Admiraal and Antonia Cornaro, co-chairs of ITACUS, presented their new book “Underground Unveiled: Planning and Creating the Cities of the Future.” The book explores a new way of thinking about underground spaces, integrating visions of all stakeholders: urban planners, urban designers, architects, geologists and engineers.

The authors give a global overview of innovative concepts ongoing around the world, supporting the idea of underground space as a lever of sustainable development, including underground farms, multi-functional tunnels and underground pedestrian lines. 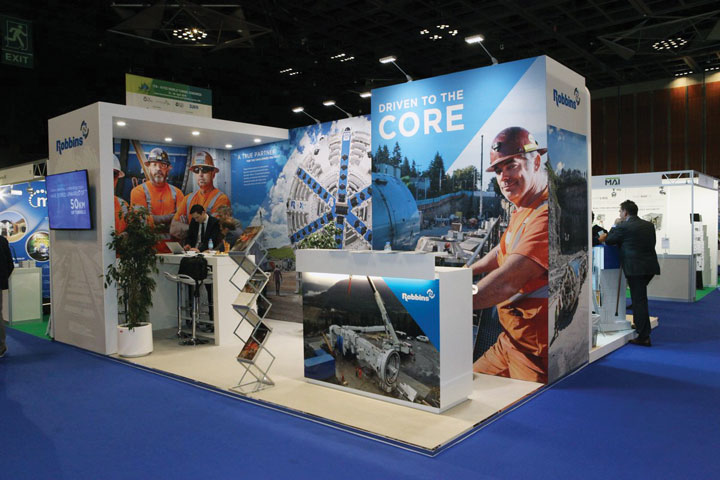 The Robbins Company was among the U.S. companies present in the exhibit hall.

Contractual Practices in the 21st Century

The risk of differing ground conditions is at the roots of many issues in contracting processes. When the ground within which a tunnel is to be built is worse than expected, the tunnel is more expensive and takes longer to build than anticipated. Nowadays, fixed-price, fixed-time contracts, as they are often successfully used in high-rise, have not proven to be effective in underground works, causing higher costs and time overrun.

FIDIC (The International Federation of Consulting Engineers) and ITA, both organizations recognized by the United Nations, the World Bank, Development Banks and the International Tunnel Insurers Group (ITIG), have formed a joint Task Group (TG 10) to propose a new form of contract for underground works: The Emerald Book.

Approached during roundtables of the Open Session, the major points included in the Emerald Book are: 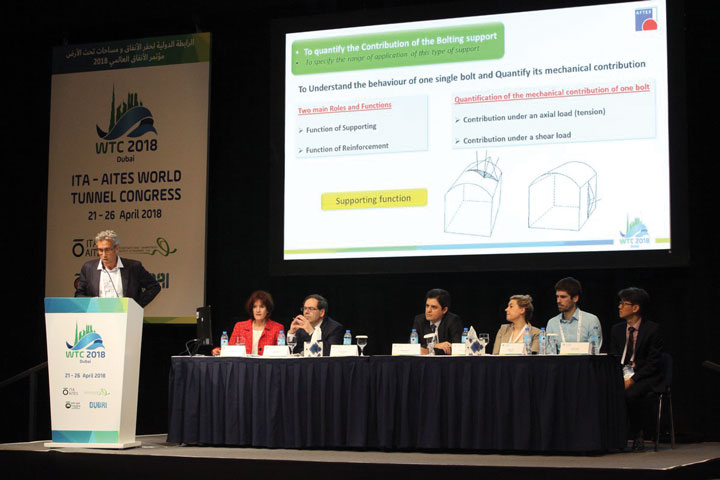 Technical discussions and panels are a hallmark of the World Tunnel Congress.

Abu Dhabi Sewerage Services Company (ADSSC) has developed the Strategic Tunnel Enhancement Program (STEP), a huge gravity-driven hydraulic wastewater tunnel network solution to relieve the hydraulic burden on the existing sewerage network and to accommodate the demand created by the projected population growth in the Emirate of Abu Dhabi.

The deep gravity sewerage system’s aim is to collect wastewater in Abu Dhabi Island and the mainland. The program includes one of the deepest gravity sewer tunnels in the world, and the first and largest in the Gulf Region.

The tunnel varied in depth from 30 to 85 m deep and the 17 shafts along the tunnel route (at approximately 2.5 km centers) were all constructed using diaphragm walls for temporary ground support. The finished internal diameter of the tunnel varied from 4 to 5.5 m, which included a corrosion protection lining comprising an HDPE primary lining and unreinforced concrete secondary lining to protect the tunnel from acid attack and corrosive compounds typically found in sanitary waste water environments.

In addition to the 41 km long tunnel, STEP includes 45 km of “link sewers” to connect the existing sewerage system to the new deep tunnel, and one large pumping station which will accommodate an average wastewater flow of 1.7 million m3/day by 2030.

The whole congress showcased the best of the tunneling industry, and the upcoming evolutions of underground construction seem to lie in digital applications and innovative concepts of underground space. When will the TBMs be completely autonomous? How can innovative systems already working for aeronautics, rail and automotive industries be applied to the tunneling? All these questions underlined the congress and shall be addressed in a short-term future.