You are at:Home»Featured Stories»A Unified Industry-Wide Voice for the Future of Tunneling 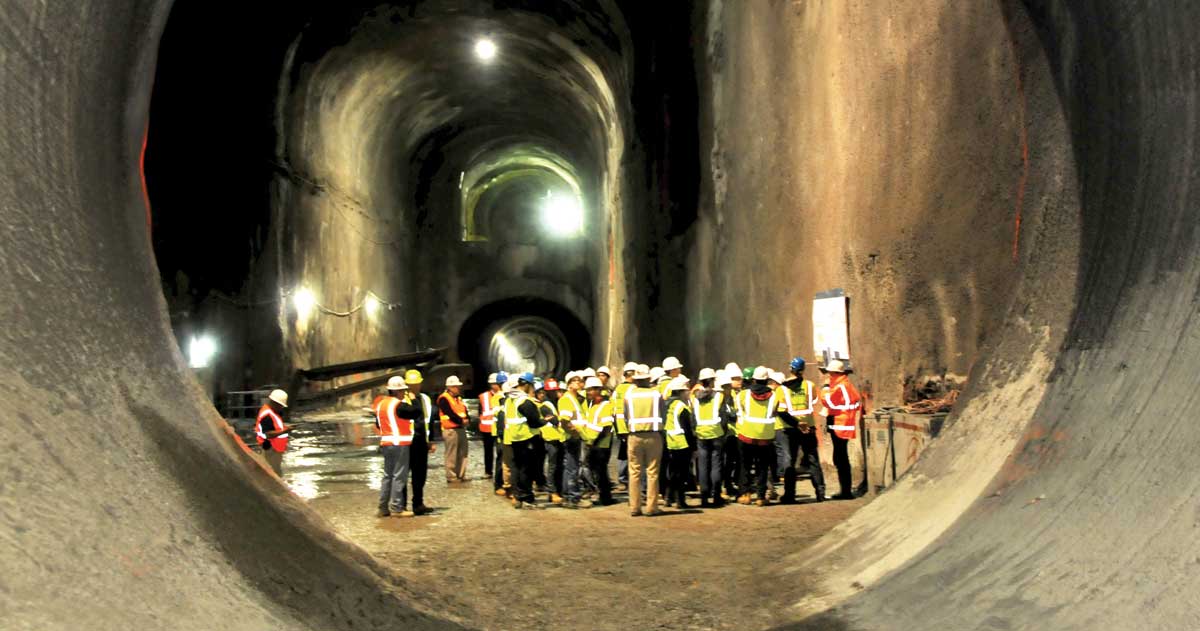 Underground construction worldwide is becoming more ambitious and complex by the year. We who are already in the business recognize that we can’t wait to expand our workforce to meet the demands of future projects. We need to act now. But how? What’s the best way to reach those future engineers in our colleges and universities and show them the exciting possibilities that lie in the world of underground construction? The truth of the matter is that far too many of our places of higher learning do not expose their students to underground engineering and construction. We, the tunneling professionals, need to take the bull by the horns. 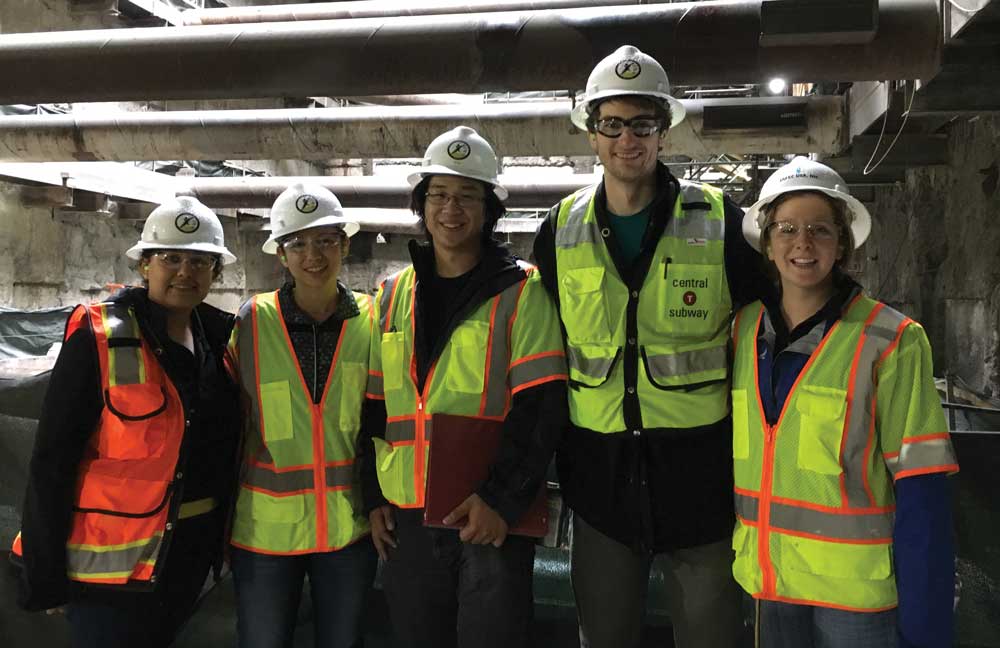 A small, but very excited, group of students touring the Chinatown Station on the Central Subway Project in San Francisco.

The UCA went on a fact-finding mission to understand how to best reach the students. We learned three things: 1) there is very real interest in the underground out there, but no familiarity, 2) you have to reach civil engineering students in their junior year before they have settled on a career path, and 3) the professors are a lot more influential than anybody suspected. A survey of 113 civil engineering college students conducted by the UCA indicated that the majority learn about career options from their professors. Of the engineering professors also surveyed, two thirds noted that while they were quite familiar with the underground construction field, they did not have the resources to share with their students. We, the practitioners, therefore need to be proactive in engaging with students in their junior year and bringing resources directly to the professors. And so the Down For That initiative, spearheaded by the UCA, was born. The intent with this program is simply to be the definitive connection between the tunneling world and academia (both students and professors).

As the definitive connection between tunneling and academia, the Down For That initiative is now a collaborative effort of all of the major players in the tunneling industry; the UCA, ASCE, The Moles, The Beavers and the Deep Foundations Institute (DFI). They each bring something unique to the table. 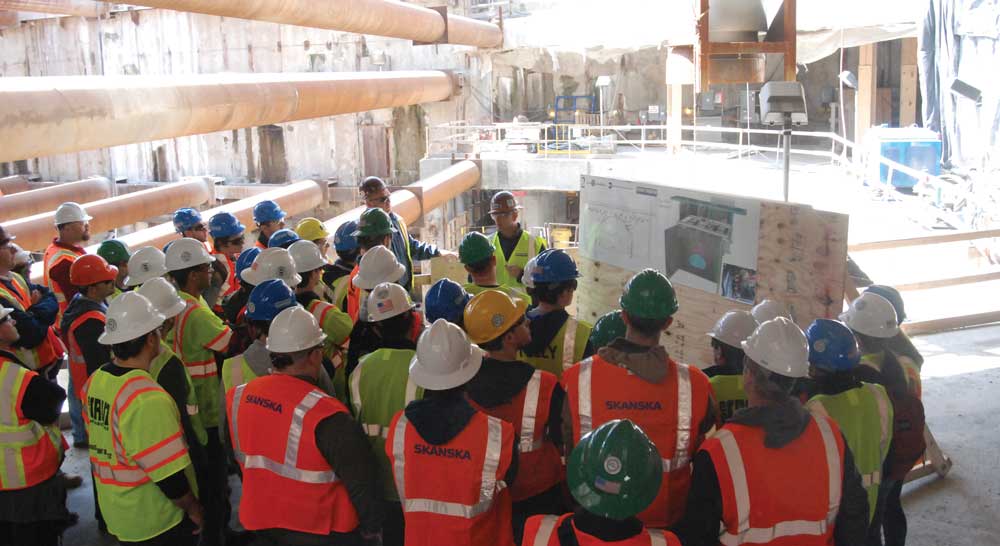 A briefing on the Northern Boulevard Crossing tunnel during Moles Students’ Day at the East Side Access site in Queens, New York. With typically more than 400 students, the Moles break the students
into smaller, more manageable groups that will be briefed at a dozen or so individual points of interest.

ASCE joined forces with the UCA about 5 years ago. It was a perfect pairing; the UCA is where the bulk of the tunneling expertise resides and ASCE has the connections at every school. We have jointly hosted small group tunnel tours and dispatched speakers for on-campus presentations with the help of Liza Dwyre and Tom Pennington, the successive chairs of the Geo-Institute Underground Engineering & Construction Committee. We jointly recognized that the vast majority of students were still totally unaware of the goldmine of opportunity we had prepared for them, which sparked the Down for That initiative.

Nobody reaches more students every year than the Moles. Moles Students’ Day gathers civil engineering juniors from more than 20 schools every year for a project tour in or around New York City. The Moles have taken advantage of every major tunneling project in NYC in the last 10 years with site tours of the East Side Access soft ground tunnels in Queens, the rock caverns beneath Grand Central Terminal, and the Second Avenue Subway tunnels. It is a Herculean effort to coordinate a site visit for more than 400 students, but it happens year after year without a glitch. Just recently, the Moles have replicated Moles Students’ Day for New England schools as well. They have one virtual Students’ Day in circulation with several more in production. But as widely-reaching as Moles Students’ Day is, it is still just a one day a year event. Many professors and Moles believe that the educational potential of Moles Students’ Day could be even greater if there could be more classroom introduction and post event follow-up. 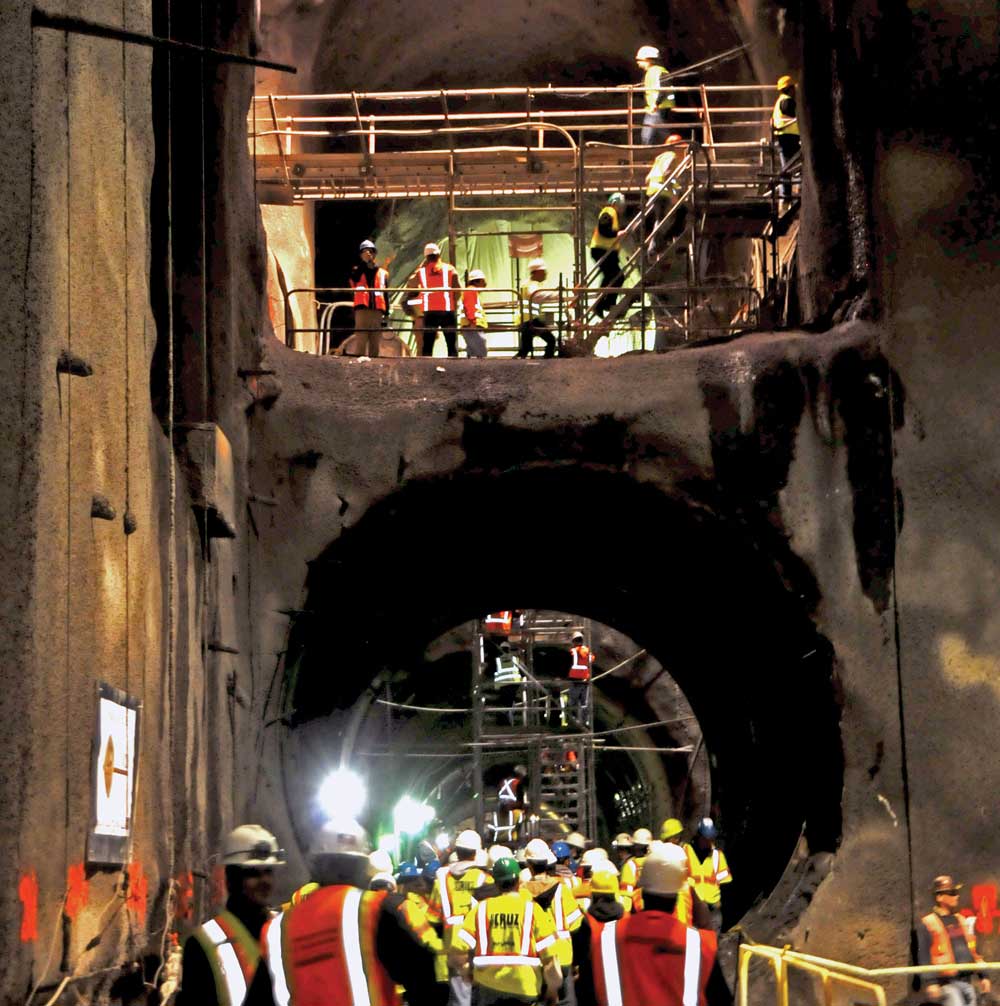 In the past 10 years, The Moles have taken full advantage of the underground construction projects of New York City. Several Moles Students’ Days were held in the caverns beneath Grand Central Terminal.

The Beavers have understood the influence of professors for years. As Executive Director, Dave Woods says “when you give out one scholarship, you affect one person, when you put the right person in front of the classroom, you affect many”.

The Beavers look at their professors like they are evangelists. The Beavers’ professors are experienced professionals. They speak the language. They communicate well with people in the industry and they bring their industry connections to the students. With 18 professor sponsorships in construction programs across the country, plus scholarships at 46 universities, education in civil engineering and heavy construction is largely shaped by the generosity of the Beavers. The Beavers professors also get very involved in the determining scholarship recipients. They have the confidence that the money is well spent. 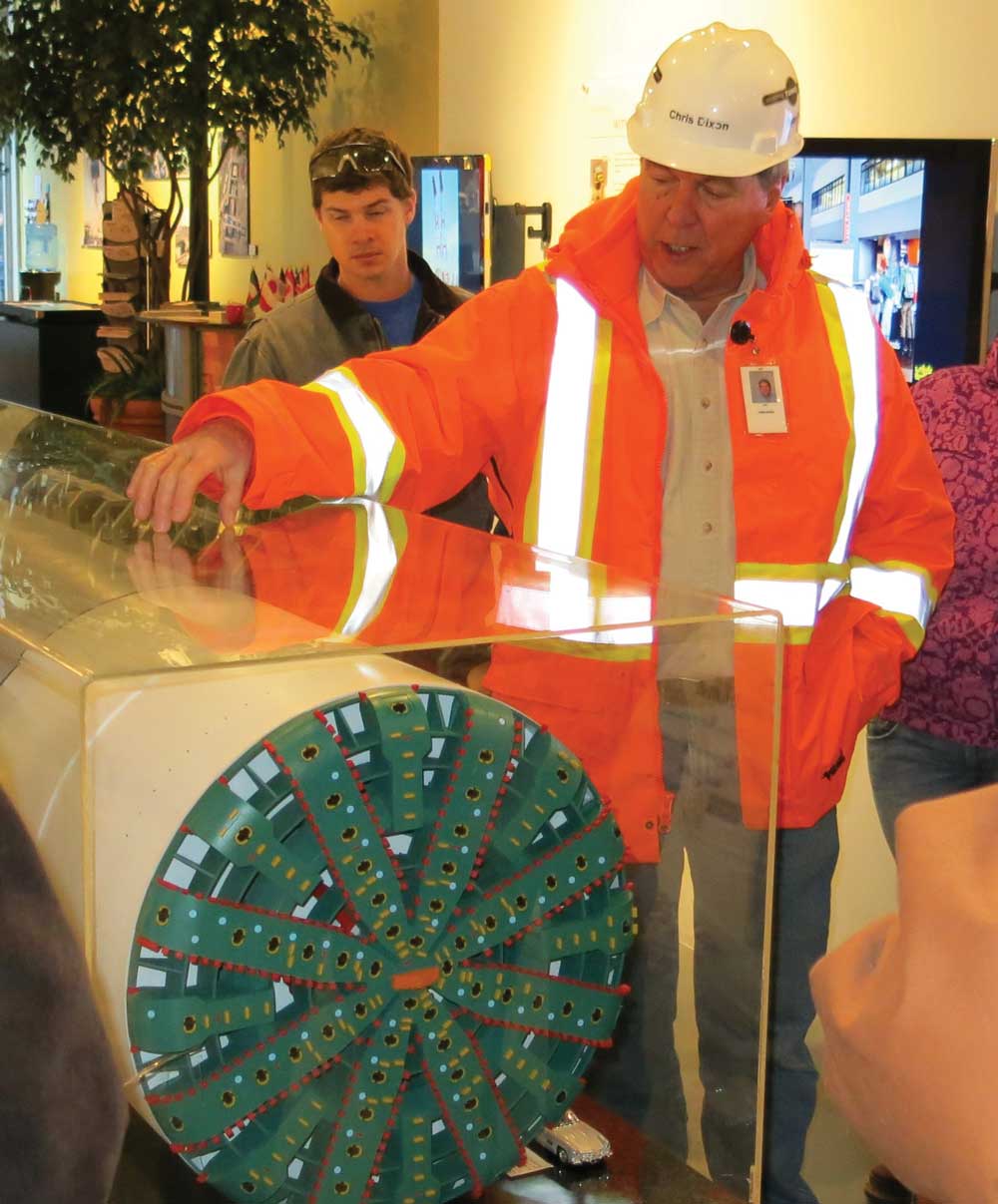 Chris Dixon gives a briefing on the TBM for a small group of students on the SR99 Alaskan Way Project. The site tour was coordinated by The Beavers.

DFI is our newest partner organization and a most welcome addition to our initiative. The organization has very active working groups and committees, including a new tunneling working group. DFI also has a very active non-profit Educational Trust that manages 19 scholarship funds and has awarded scholarships to hundreds of students to date. DFI’s experience will undoubtedly help us to direct scholarships to where they will be most effective.

WHAT CAN YOU DO TO HELP THE INITIATIVE?

There are a number of ways you can help on an individual or company basis:

The UCA is coordinating liaisons to the various universities that will help to get us in front of the schools on a regular basis. We aim to build relationships with the professors and feed them tunneling until it becomes part of their regular diet. Most people have at least some relationship with one school or another and can be very effective in maintaining a relationship between the industry and the school.

Volunteer to be a Speaker/Presenter

The number one thing that all professors want is industry people to come and show their students what the real world is like. Many are hesitant to get out there and do a presentation at a school because they don’t think they can make a difference. Believe me, you can! And the satisfaction is addictive. To the seasoned practitioner, what is the most mundane of tunneling projects is a new world of excitement to a college student who hasn’t been exposed to any of it before. In polling the university professors, we learned that live, on-campus presentations are what every school wants more of.

We need more tunneling-friendly professors – ones that recognize that tunneling work is a great way to weave exciting real-world examples into their geotechnical, structural, or construction curriculum. Matt Evans from Oregon State says “Everything is different in the underground industry. You will see more in one day than others will see in their whole career.” He gets it. He is a real advocate. Recruit a professor like Matt Evans for the Teach the Professors Course that the UCA will host at the tunneling conference every 2 years.

By donating teaching resources, you get your company materials out there on the streets. Let your company name become a household name amongst the schools!

The Tunnel Tours program provides an opportunity for a small group of students to tour an active tunneling project. Professors report that site tours impress students and open their eyes to the array of problems and challenges that underground construction engineers must resolve both safely and effectively.

Once their interest is engaged through all of the above, students will invariably look for more information and their first port of call will be the companies that actively participate in the Down For That initiative. So, post those internship and entry level opportunities! You may be surprised how many great interns choose to accept offers to stay with the same company upon graduation.

Go to www.undergroundcareers.org and see what we have already in motion. If any of this resonates with you, reach out to us at downforthat@ucaofsme.org to see how you can get involved. We look forward to welcoming you on board!

Paul Schmall, PhD., P.E. is Vice President of Keller Specialty Services and is on the UCA Executive Board & Student Outreach.