You are at:Home»News»Akron TBM ‘Rosie’ Completes Journey with Breakthrough Party 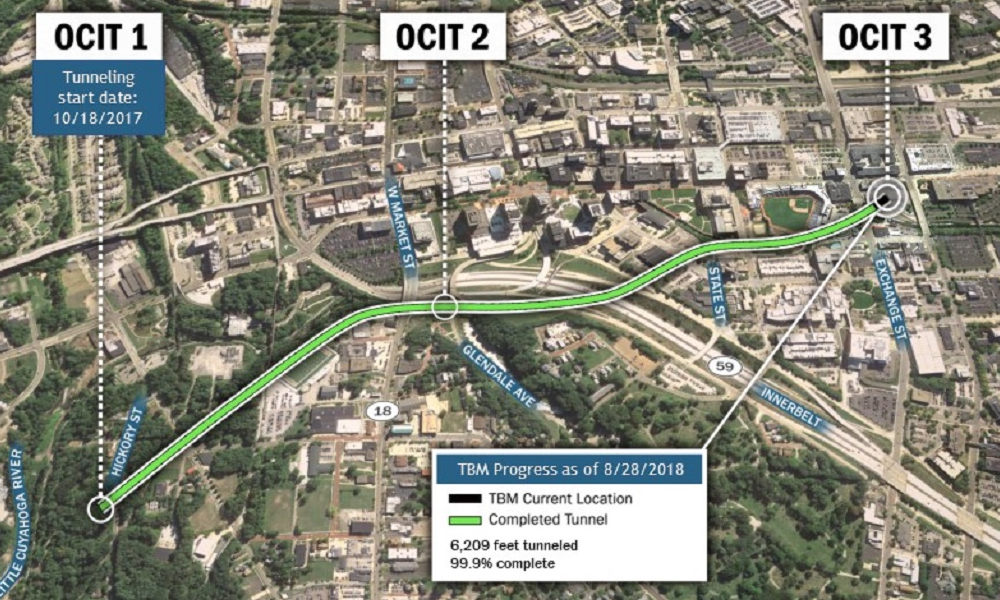 Rosie, the Robbins TBM excavating the Ohio Canal Interceptor Tunnel (OCIT) in Akron, Ohio, completed its journey Aug. 29 with a party for the public and a live web stream.

A joint venture between Illinois-based Kenny Construction Co. and Tokyo-based Obayashi Corp. bored the tunnel for the City of Akron. The 27-ft diameter tunnel spans a distance of 6,240 feet. When complete, the tunnel will hold 25.6 million gallons of stormwater and sewage during heavy rain events and control nine of the overflows into the Ohio & Erie Canal and Little Cuyahoga River. The $184.1 million bid by the Kenny/Obayashi JV came in below the Engineer’s estimate of $252.2 million.

The TBM, which features both EPB and Hard Rock Single Shield TBM types, is the first Robbins Crossover machine to be used in the United States. It was launched from a 12 m (40 ft) deep portal site and built the first 68 m (226 ft) in soft ground, transitioning to a 183 m (600 ft) long zone of partial face shale before switching to hard-rock mode for the remainder of the drive in full face shale.

“One of the most challenging aspects of this job was that we launched right into the most difficult part. We had 60 m (200 ft) of soft ground, a very short reach, and then from there we went right into a mixed face for 180 m (600 ft),” said David Chastka, Project Manager for Kenny Construction, a joint venture contractor on the project with Obayashi. “It took everybody we had in the industry, everybody from Robbins, to fight through that first 240 m (800 ft).”

The breakthrough party, held from noon to 2 p.m. at Lock 3 on Main Street near the extraction shaft. OCIT is part of the Akron Waterways Renewed! program to reduce pollution into local waterways.

The machine was named Rosie in honor of Rosie the Riveter, an icon representing American women who worked in factories and shipyards during World War II—overcame tough ground conditions during the bore.