You are at:Home»News»Robbins Crossover TBM Heading to Akron 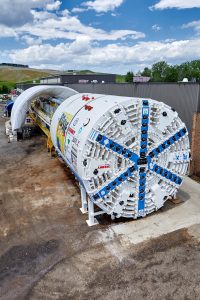 The Robbins TBM will bore in sections of both hard rock and soft ground to complete the Akron Ohio Canal Interceptor Tunnel (OCIT).

The TBM, which includes features of both EPB and Hard Rock Single Shield TBM types, is the first Crossover machine to be used in the United States. It will be launched from a 12 m (40 ft) deep portal site and build the first 68 m (226 ft) in soft ground, transitioning to a 183 m (600 ft) long zone of partial face shale before switching to hard-rock mode for the remainder of the drive in full face shale. Probe drilling will be done continuously using two probe drills to determine which mode the TBM should be in.

Unique aspects of the machine include a versatile cutterhead that will be configured with consideration for both the short soft ground section and the longer section (about 65% of the tunnel) in hard rock. A combination of disc cutters and sacrificial rippers will be used in case a cutter becomes blocked. The required rolling torque of the disc cutters has been reduced by 25% to encourage smooth rotation in soft ground. The motors of the XRE machine have been reworked from an original EPB configuration to permit higher motor speed at reduced torque for the open mode segments of the drive.

Muck removal will be achieved with a durable screw conveyor, the first flight of which is covered welded-in wear plates. The auger shaft is lined with hard facing in a crosshatch pattern, while the screw conveyor casing has been similarly lined in wear plates and hard facing. A wear monitoring plan has been prepared for the entire drive in order to maximize efficiency in the section of more abrasive rock.

Robbins Project Manager Pablo Salazar is proud of the utilization of local jobs during the TBM construction and design process: “We have built good portion of the machine in the northeast Ohio area. Many components were fabricated locally with sub-suppliers, as well as in our own shop.”

The muck will be transported out of the tunnel using a Robbins continuous conveyor system—the setup will be the 100th such conveyor supplied by Robbins for operation behind a TBM. 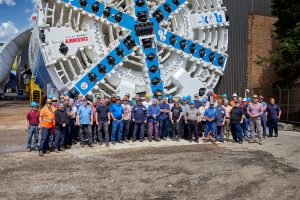 The machine was dubbed “Rosie” in honor of Rosie the Riveter, an icon representing the American women who worked in factories and shipyards during World War II. Hundreds of “Rosies,” including Akron resident Rose May Jacob, worked in factories to turn out materials and armaments for the Allied war effort.

The TBM is being shipped in truckloads to the jobsite, with the large cutterhead shipped in four pieces. “The entire process of assembly has allowed the contractor to follow very closely through the testing of the machine, so they are very familiar with the TBM at this point. At the jobsite, we will also provide immediate support for both spare parts and personnel,” said Salazar.

Jobsite supervisors from Robbins will assist in TBM assembly and excavation for at least the first 1,000 m (3,280 ft) of boring. Tunnel boring is scheduled to begin in August 2017.

The OCIT Project for the City of Akron consists of the construction of a conveyance and storage tunnel system to control Combined Sewer Overflows (CSOs) for several regulators in the downtown Akron area. The EPA-mandated project includes the 1.89-km (1.17-mile) conveyance and storage tunnel, as well as drop shafts, diversion structures, consolidation sewers, and related structures. The consent decree specifies that the tunnel must be operational by Dec. 31, 2018.