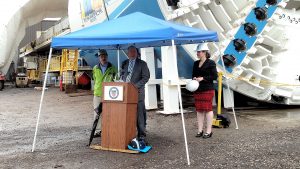 Akron Mayor Dan Horrigan addresses the crowd at the unveiling of ‘Rosie,’ the TBM for the Ohio Canal Interceptor Tunnel.

The Robbins Company welcomed local media and project members to its Solon, Ohio, facility on May 25 to unveil ‘Rosie,’ the crossover TBM that will be shipped 25 miles south for construction of the Ohio Canal Interceptor Tunnel in Akron.

The $12 million TBM will be disassembled and shipped in the coming weeks with boring expected to begin before the end of the summer. The TBM will be launched from a portal site and build the first several hundred feet in soft ground before switching to hard-rock mode for the remainder of the drive. It is the first Robbins Crossover TBM to be used in the United States.

On had to give remarks were Akron Mayor Dan Horrigan, Robbins chief engineer Dennis Ofiari, and David Chastka, project engineer for the Kenny-Obayashi JV. Project representatives from DLZ, Parsons and McMillen Jacobs Associates were also on hand.

A joint venture between Illinois-based Kenny Construction Co. and Tokyo-based Obayashi Corp. will bore the tunnel, which will be 27 ft in diameter, span a distance of 6,240 ft, will be able to hold 25.6 million gallons of stormwater and sewage during heavy rain events and control nine of the overflows into the Ohio & Erie Canal and Little Cuyahoga River. Depths range from 70 to 160 ft below the surface. The $184.1 million bid by the Kenny/Obayashi JV came in below the engineer’s estimate of $252.2 million. 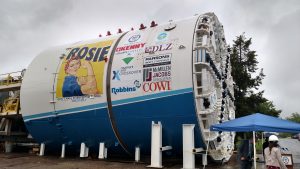 The Crossover TBM is a first for the United States.

The Ohio Canal Interceptor Tunnel is the largest project under the Akron Waterways Renewed! program – the city’s $1.4 billion program to reduce combined sewer overflows in local waterways, including the Cuyahoga River.

What’s in a Name?

The TBM was nicknamed ‘Rosie’ following a contest open to residents. The name recognizes Rose May Jacob and the hundreds of other ‘Rosies’ that worked at Akron’s rubber factories during World War II, who turned out material and armaments for the allied effort.

Jacob died in December 2014 at the age of 88. She was a junior at Kenmore High School when she began working at Firestone, where she helped rivet wings for C-47 warplanes.

Goodyear, Firestone and Goodrich recruited people from Akron high schools to work on the war effort. Rosie (as her friends called her) Jacob was quick to volunteer, even though it meant she had to attend school in the mornings and work an eight-hour shift until late at night. The desire to help the war from the home front was also personal to Jacob, as her two older brothers fought in the war. Jacob worked at Firestone Aircraft until the war ended in 1945.