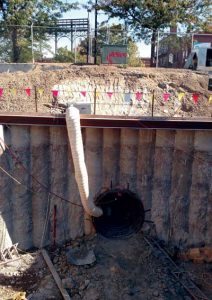 After years of planning,Ohio Canal Interceptor Tunnel project in Akron is beginning to take shape. Crews are actively working on the portal site in anticipation of full-bore tunneling later this year.

The Ohio Canal Interceptor Tunnel is the largest project under the Akron Waterways Renewed! program – the city’s $1.4 billion program to reduce combined sewer overflows in local waterways, including the Cuyahoga River.

A joint venture between Illinois-based Kenny Construction Co. and Tokyo-based Obayashi Corp. will bore the tunnel, which will be 27 ft in diameter, span a distance of 6,240 ft, will be able to hold 25.6 million gallons of stormwater and sewage during heavy rain events and control nine of the overflows into the Ohio & Erie Canal and Little Cuyahoga River. Depths range from 70 to 160 ft below the surface. The $184.1 million bid by the Kenny/Obayashi JV came in below the engineer’s estimate of $252.2 million.

The tunnel boring machine, a Robbins Crossover TBM, is currently being built at the company’s shop in nearby Solon, Ohio. It will be the first Robbins Crossover TBM used in the United States. Officially announced in 2015, Crossover TBMs have been used for projects in Australia and Mexico. It is expected to launch in the spring and be complete by the end of 2018.

Critical to success of the big bore, however, is an 89-ft connecting tunnel that was recently constructed under West Exchange Street. The tunnel was built at the receiving shaft site and will ultimately connect the combined sewer overflow tunnel to the existing sewer network.

The project was completed this fall by Turn-Key Tunneling of Columbus, Ohio, using the techniques of hand mining techniques in conjunction with a chemical grouting program to stabilize the ground. With the completion of the project, construction of the receiving shaft can proceed

The tunnel built under West Exchange Street is formally known as the Rack 17 Consolidation Sewer. The job was subcontracted by Kenny/Obayashi to Turn-Key Tunneling on a fixed-price contract with stabilization grouting performed on a time-and-materials basis.

Original plans called for the tunnel to be constructed by driving casing through sandy, running materials. However, there was a potential for encountering obstructions which would make driving casing extremely difficult. Based on past experience, Turn-Key offered a modified approach.

Turn-Key’s solution involved installing a canopy of chemical grout to stabilize the ground ahead of the tunnel face in combination with hand mining and liner plate support. “We felt that with the original plan of driving casing, if you did encounter an obstruction, you would probably need to go in and grout the ground to secure it and then remove the obstruction,” said Joel Froehlich, Project Manager for Turn-Key Tunneling. “With our approach, we’re already in the tunnel and grouting the ground, so we felt that it was a more efficient approach.” 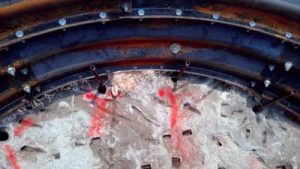 Chemical grout was injected through grout ports to consolidate the ground and form a canopy above the tunnel.

Froehlich said Turn-Key first started working with the grouting company, Harrison, Ohio-based T. Luckey Sons Inc., on a project in Cleveland for the Northeast Ohio Regional Sewer District. In that case, Turn-Key encountered a petrified tree stump along the tunnel alignment and called in T. Luckey to consolidate the ground around the obstruction using chemical grout. Since then, Turn-Key and T. Luckey have worked together on about 10 projects.

In Akron, however, the owner and designer, DLZ, were unfamiliar with the process and underwent a thorough review before accepting the proposal.

Turn-Key crews began the tunnel through a secant pile wall installed by Kenny/Obayashi that will serve as the wall of the reception shaft. The secant piles are 36-in. in diameter with another 11 ft of concrete slope stabilization added. Crews began breaking through the secant pile wall on Sept. 15 and began excavating native soil on Sept. 26.

The mining process involved driving grout rods approximately 1 ft apart along the crown of the tunnel from the 9 o’clock to 3 o’clock position. The rods were driven in at 10-ft intervals and then retracted in 1 ft intervals and stopped to allow for grout injection. The chemical grout reacts with water in the ground to provide initial support.

Once the 10-ft interval was grouted, crews used air hammers, spades and other hand tools to advance the face, installing 18-in. wide tunnel liner plates along the way. Crews excavated to within 2-3 ft of the end of the canopy before re-starting the grout procedure. Turn-Key Tunneling and T. Luckey continued in this manner until the entire contract length of 89’ was installed.

Crews completed the tunnel on Oct. 20 and immediately began to install the 72-in. Hobas carrier pipe which was to be the final carrier. The final tie-in for this structure is not to take place until 2018 but needed solidified due to the busy traffic associated with Market St. The tunnel terminus was bulkhead in place, a custom Hobas cap positioned on the end of the pipe and the annulus backfilled with cellular grout. Project completion occurred on Nov. 2

In the end, the decision to use the hand mining method proved to be the right choice. Froehlich said crews encountered obstructions along the alignment that would have been right in the part of the casing. In all, Froehlich was happy with the progress his crews made. “It took a little while but we got a good rhythm going between our crews and the T. Luckey crews,” he said. “I think in the end everyone involved with the project was pleased with the outcome.”

With this portion of the project out of the way, Kenny/Obayashi can turn its attention to driving the big tunnel in the coming months, helping the City of Akron achieve its clean water goals.