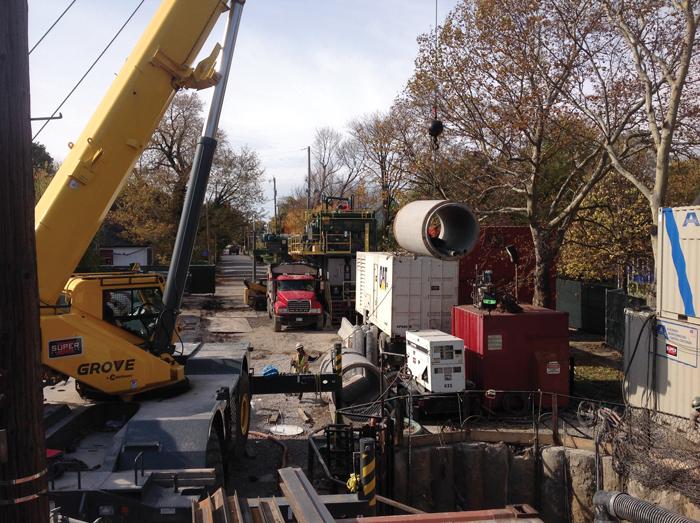 The City of Cleveland and Northeast Ohio have long been linked with the environmental movement in the United States. In fact, the infamous Cuyahoga River fire in 1969, which was not a unique incident in Cleveland or other cities in the United States, helped to prompt the landmark passage of the Clean Water Act in 1972.

Since that time, Cleveland and the Northeast Ohio Regional Sewer District (NEORSD) have been actively engaged in sewer upgrades that have led to significant improvement in water quality in the area’s waterways. NEORSD’s largest undertaking – Project Clean Lake – is currently underway and involves several tunnel and underground construction projects.

Project Clean Lake is a 25-year, $3 billion program that will reduce the total volume of raw sewage discharges from 4.5 billion gallons to 494 million gallons annually. When complete, more than 98% of wet weather flows will be captured and treated. 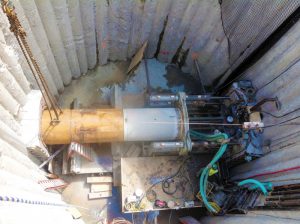 In October 2013, NEORSD awarded a $57 million contract for the DWIRS project to joint venture partners Walsh Construction and Super Excavators Inc. Walsh Construction was responsible for all of the above-ground work, including regulating structures, manholes, junction chambers, and all tie-in connections to the existing sewer system. Super Excavators focused on the microtunneling work, which comprised 7,000 lf of 72-in. RCP relief sewer, and 4,000 lf of 48-in. RCP sewer.

In total, there were 17 separate drives of varying lengths with the longest being 1,079 lf. Depths generally ranged from 25 to 32 vf with the deepest drive at 42 ft. Nine launch shafts and 11 receiving shafts were constructed. Because of the project-specific soil conditions and elevated water table, two MTBMs with capability to continuously pressurize the mining face were used. The first MTBM drive was launched in August 2014 from a 45-ft deep secant pile shaft with an Akkerman SL60 MTBM. The SL60 was used throughout the project for the 48-in. RCP sewer, including 915-lf run in shale. An Akkerman SL74 was deployed on all of the 72-in. drives including a 700-lf curved microtunnel – the first instance of a curved drive in the Midwest.

At its own initiative, Super Excavators submitted a value engineering change proposal (VECP) for design modifications to the Dugway West Interceptor Relief Sewer (DWIRS) microtunnel portion of the project. The VECP introduced a 700-lf, 72-in. tunnel curve alignment, replacing three shorter straight drives, and relocating one structure. Benefits from the design modifications included reduced community impacts and maintenance costs from elimination of the construction of two shafts in a residential neighborhood. These changes also accelerated the overall project schedule.

The original NEORSD design used three shorter drives in order to work within the easement granted for the project, and to stay far enough away from the existing 12-ft diameter Dugway Brook Culvert, which was built in the early 1900s. The initial design approach followed the curve of the culvert with short pieces of straight pipe. Together these relatively short tunnel runs made up about 670 lf.

Super Excavators realized that these three straight runs could be incorporated into one longer curved drive design that would greatly reduce the costs and time associated with the shaft construction, setup/breakdown, and moving equipment and crews around. All of this could be accomplished through elimination of one jacking shaft and one receiving shaft. 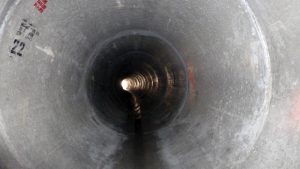 The 700-ft tunnel marked the curved drive completed in the Midwest.

With the curved design approach, future maintenance costs incurred by the NEORSD for these two structures (points of intersection) PM 14 and PM15 were completely eliminated. The owner allowed Super Excavators to relocate structure PM13 approximately 30 ft north, which helped facilitate a the curve by making it 30 ft longer, and thus 700 lf in total. Ground conditions consisted of soft silts, clays, fill and shale bedrock with high groundwater.

“The decision to use a curved drive was a matter of practicality in terms of schedulem neighborhood impact, cost and overall project goals, all if which were successfully met and delivered by implementing the curve design,” Super Excavators project manager Justin Kolster said.

The approximately 700-ft long microtunnel run started out with a 140-ft straight alignment, followed by a 340-ft long curve on a 915-ft radius, and finished with a straight 210-ft run.