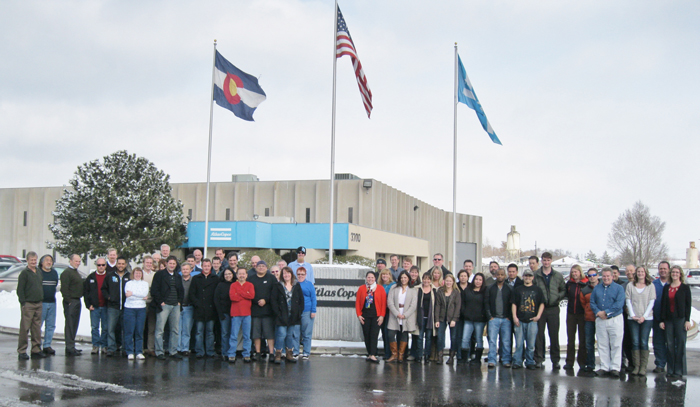 Through 140 years of innovation and acquisition, Atlas Copco has grown to serve customers in over 170 countries, including 109 locations in the United States alone.

Atlas Copco CEO Ronnie Leten marked the company’s 140th anniversary by ringing the opening bell at the NASDAQ MarketSite in New York’s Times Square on Feb. 21.The bell ringing signified the beginning of the day’s trading and the start of a year-long anniversary celebration for Atlas Copco. Maureen Ellis, an employee celebrating more than 40 years with Atlas Copco in the United States, joined Leten at the event, along with select customers and other company management and stakeholders.

Headquartered in Sweden, Atlas Copco began with an idea in 1873 that the country should become more self-sufficient in railroad building. As the years passed however, development, technical innovations and competition drove the company to diversify its product portfolio. In the 1950s the first major strategic international acquisition was made with the purchase of Arpic Engineering, a Belgian compressor company.

The growth of Atlas Copco is also widely accredited to the founding Wallenberg family. It is said that without the family’s belief in the company and its sometimes unorthodox decisions, Atlas Copco would probably not exist today.

“From our beginning in 1873 as a manufacturer of products for the railroad industry, we have expanded and adapted to hold world-leading positions in compressed air and gas equipment, construction and mining equipment, industrial tools and assembly systems,” said Jim Levitt, president of Atlas Copco North America. “The United States is the Group’s largest single market and North America contributes about one-fifth of our overall revenue. The best way to celebrate 140 years in business is to acknowledge the customers that make it possible. We sincerely thank each and every one of them for their business.”

Through 140 years of innovation and acquisition, Atlas Copco has grown to serve customers in over 170 countries. Atlas Copco first came to the United States in 1950. Today, Atlas Copco has 109 locations in the United States alone, representing 1.7 million sq ft of manufacturing, production, distribution and office space, and employing more than 4,600 people and works with hundreds of carefully selected distributors. North America operations as a whole generated more than $2.8 billion in annual revenue in 2012.

As part of the anniversary celebration, Atlas Copco North America donated $60,000 to New York City-based “charity: water,” a global non-profit dedicated to bringing clean and safe drinking water to people in developing nations. The donation brings Atlas Copco’s total charity: water giving to $161,000 since 2010, with the company’s employee-run Water for All organization donating more than $239,000 since the program’s inception. To learn more about Atlas Copco’s employee-run Water for All charity program, please visit http://www.water4all.org/us/