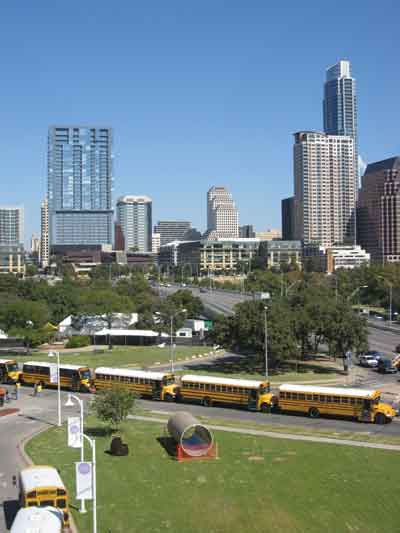 Austin’s Downtown Wastewater Tunnel was constructed to alleviate the stress on the sewers that had been operating at capacity. Two major sewers serve downtown Austin, running along the north and south shores of Lady Bird Lake. Lady Bird Lake is a reservoir on the Colorado River in downtown used primarily for flood control and recreation. The added capacity from the new tunnel will take sewer flows from both existing lines to prevent sewer overflow and will provide the additional capacity needed for existing and future expansion in the downtown area. Another benefit of the project is that several lift stations will be taken off line by the Austin Water Utility, thus improving the efficiency and reliability of the system. Austin Water Utility is owned and operated by the City of Austin.

Due to the proximity to downtown, the City selected tunneling methods to avoid major public disruption. The five shaft locations were chosen based on geotechnical investigations and to limit the public impact by the project. The project includes over 3.5 miles of gravity tunnel 50 to 80 ft deep and crosses under Lady Bird Lake three times picking up flows from several interceptors.
Challenging Alignment

Designed by the local Parsonís office in Austin, the project includes 54- through 90-in. diameter centrifugally cast fiber reinforced polymer mortar (CCFRPM) pipe. The design considerations included the varied geologic profile, the crossing of several fault zones, design flows and the maintenance of adequate flow velocity, odor control, and corrosion problems. Since the tunnel passes through populated areas, and would be difficult to repair in the future, a long service life was critical, and the use of corrosion-resistant materials imperative.

According to Parsonís website, ìSelection of the final alignment was critical because of the fixed end points, the low rock cover over the tunnel, and the presence of groundwater associated with Lady Bird Lake along the entire alignment. The final design incorporated innovative solutions to reduce community impacts and construction costs.

Hobas has supplied many projects in the Austin area dating back to 1988 when 48-in. diameter pipes were manufactured for the West Bull Creek Wastewater Interceptor. Many of these projects have been in environmentally sensitive areas, such as the Sunset Valley-Travis County Wastewater Interceptor, which is buried within the Edwards Aquifer recharge and transition zones. The project finally gained approval on the basis of providing a zero leakage system. All pipes for this project tested leak-free on first test, without any pressure drop during the one hour 5 psi air test. 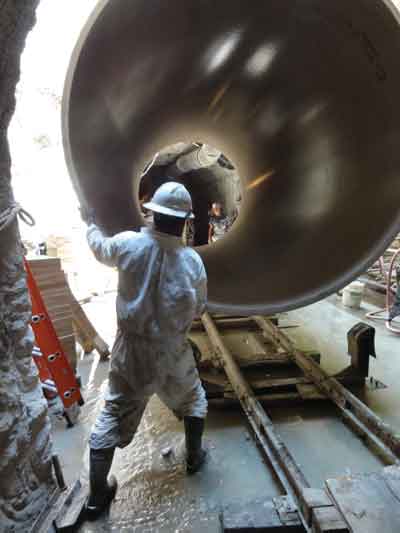 The project bid in October 2009, notice to proceed was issued February 2010 and included over two years of contract time to complete. The original completion date was set for November 2012. The successful low bidder on the project was SAK Construction, headquartered in St. Louis, Mo.

A H Beck was subcontracted to provide design-build secant pile shoring for four, 28-ft ID tunnel access shafts. The shaft design was critical due to the location of the granular Lower Colorado River Terrace deposits that caused high groundwater conditions for the close proximity shafts. Once the shafts were secured, TBM excavation ensued. ìWe utilized TBMs that could be fitted with disc cutters for hard rock and drag cutters for soft rock. Crews changed the cutters as needed as the TBMs progressed through both types of rock,î said James Byrd, Senior Project Manager with SAK. Due to the geology of the alignment, the 8- to 10-ft primary tunnel included both lined and unlined tunnels. The 54- through 90-in. CCFRPM liner was then placed within the primary tunnel.

SAK installed 20-ft sections of pipe where possible, and utilized shorter sections to navigate curves. There were 13 curves within the reach of the 120-in. diameter primary tunnel that housed the 78- and 90-in. liner pipes. The 84-in. diameter primary tunnel had eight curves into which 54- and 84-in. diameter liners were placed. The curves ranged from 800- to 2,500-ft radius. After liner installation, lightweight cellular grout was installed in the annular space. Two methods were utilized. For the 54-, 84- and 90-in. diameter, the pipes were grouted from inside the pipe through grout ports supplied by Hobas. The 36-in. diameter was grouted by filling the liner with water for ballast, and grout was installed through the bulkheads.
Ahead of Schedule

The designer chose CCFRPM pipe due to its corrosion resistance and long life, but SAK enjoyed the quick installation and leak-free service of the couplings. The entire length of the project was below the water table and therefore infiltration testing was performed. All pipe passed the infiltration test, Byrd noted.

Substantial completion of the project was on Aug. 3, 2012, and the entire 20,554 lf was in service on that date ñ three months ahead of the original schedule.