You are at:Home»Featured Stories»Bon Voyage Party Set for SR 99 TBM 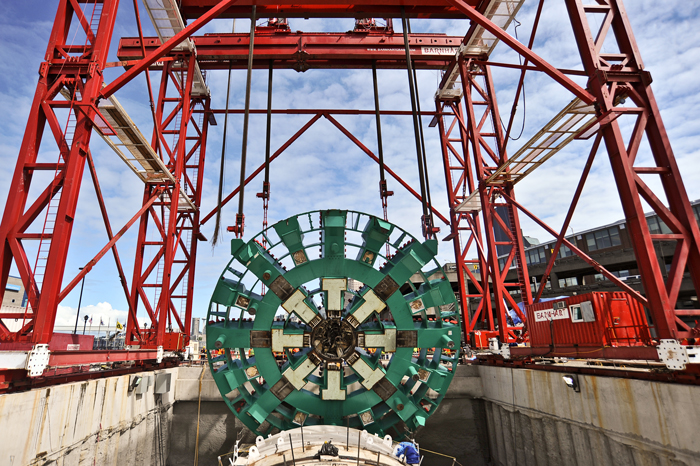 The power is on, the cutterhead is hooked up and two miles of Seattle soil await the teeth of Bertha, the world’s largest tunneling machine. Aside from running final tests, there’s only one thing left to do before the massive machine’s launch later this month: say goodbye.

On Saturday, July 20, Gov. Jay Inslee and the Washington State Department of Transportation will host a public celebration at Bertha’s launch site, west of CenturyLink Field, from 11:30 a.m. to 3 p.m. Following a dedication ceremony, attendees can talk with project staff, learn about the tunneling operation and view Bertha from one of the walkways that span her 80-ft-deep launch pit.

“This project belongs to the people of Washington,” said Gov. Inslee. “We want to give everyone a chance to see this amazing machine up close before it starts tunneling beneath Seattle.”

The event includes activities designed to teach kids about science and engineering and provides the opportunity for attendees to sign their names on one of the concrete segments that will form the tunnel’s walls.

Bertha, who has been updating her progress on Twitter since December, said she has mixed feelings about her pre-launch celebration. “Don’t get me wrong. I’m ready to celebrate,” @BerthaDigsSR99 tweeted Tuesday. “But I really hope no one breaks a bottle over my head. Talk about a painful tradition!”

A 10-ft-long interactive model of Bertha is on display at Milepost 31, the project’s information center in Pioneer Square. Photos of the tunneling machine and construction in Seattle are also available.

Tunneling starts at the end of July after final testing is complete. The tunnel is scheduled to open to drivers in late 2015. For more information about the SR 99 Tunnel Project, visit http://www.alaskanwayviaduct.org.