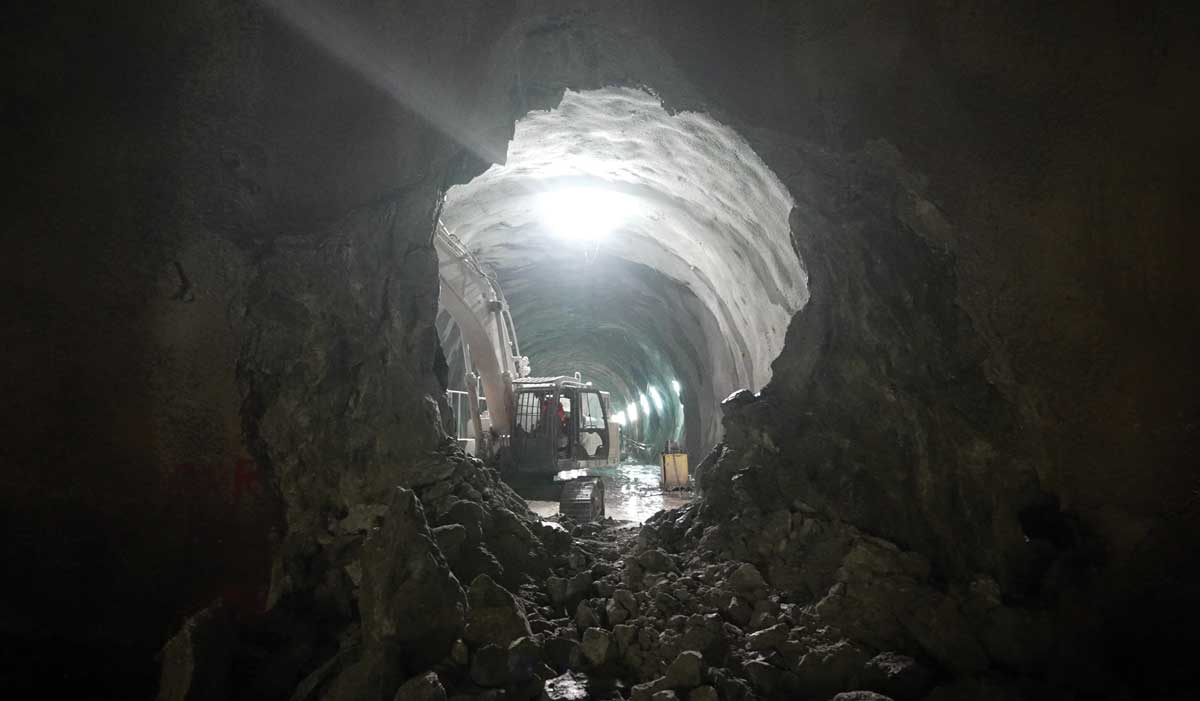 It was great to see so many tunneling professionals turn out for the re-scheduled George A. Fox Conference and The Moles Award Dinner in May in New York City, despite the lingering concerns over the COVID-19 pandemic. The strong turnout coupled with recent events could portend a bright future for the U.S. tunneling market.

On April 6, President Joe Biden and the U.S. Department of Transportation’s Federal Transit Administration announced a more than $20 billion investment in American transit to help communities modernize and expand service. This is welcomed news for stalled projects including the new Hudson River tunnels between New York and New Jersey and the Baltimore & Potomac Tunnel Replacement/Frederick Douglass Tunnel in Maryland, among others.

Another positive development has been the increase in ridership on the New York subway. While transit levels dropped in the midst of the COVID pandemic, ridership has seen an increase recently. New York Gov. Kathy Hochul with the Metropolitan Transportation Authority announced that subway ridership on May 18 topped 3.6 million, breaking a previous record set just the day before on May 17, of 3.535 million. Additionally, on Tuesday, May 17, pandemic-era ridership records were set on both the Long Island Rail Road and Metro-North Railroad with Long Island Rail Road recording 182,700 rides, and Metro-North recording 162,100 rides. Each of these figures surpass pandemic-era records set in the past several weeks, and are the highest totals since March 2020.

Demand for all types of infrastructure remains high. Our cities are becoming increasingly congested, necessitating the need for new capacity, while existing infrastructure continues to age and is need of repair and replacement. Could these new funding sources available through the Infrastructure Investment and Jobs Act along with pent-up demand be a boon for tunneling? That remains to be seen but things seem to be trending in the right direction.

Measure M, which will levy a half-cent sales tax increase, will allocate $860 million annually for transportation improvements over the next 40 years. Included in the plans are a tunnel connecting the San Fernando Valley and the LA’s Westside, further extension of the Purple Line, and a rail line to Los Angeles International Airport.

Additionally, Measure M will pay for much-needed sidewalk improvements, pothole repairs, cycling infrastructure, bike share expansion, and a network of greenways. The measure won with approximately two-thirds of the vote. Measure M came on the heels of passage of Measure R, a similar funding bill that passed in 2008.

Also, in 2016, voters in Washington approved Sound Transit 3 (ST3), a ballot measure that provides $54 billion in funding to expand and improve transportation in the Seattle area. ST3 will add 62 miles of light rail, completing a 116-mile regional system. In October. Sound Transit announced the opening of its Northgate Link Extension Light Rail project, which was completed under budget and ahead of schedule. The project’s aim is to increase light rail ridership, improve travel time, and add transit capacity to the congested Interstate-5 corridor. The project consists of 4.3 miles (6.9 km) of double-track light rail, 3.5 miles (5.6 km) in twin bored soft-ground tunnels, along with two underground transit stations (U District and Roosevelt), and one elevated station (Northgate).

While expanding transit service is nothing new for the coasts, a notable continuation of voter-backed transit occurred in Austin, Texas, in 2020, where the $7.1 billion Project Connect transportation proposal was approved. This proposal, which includes a 1.6-mile tunnel in the city’s downtown area, includes using property tax revenue to fund the project, although a large portion of the funds would come from federal coffers.

Back in California, a new study from Berkeley’s Institute of Governmental Studies showed that 56 percent of voters support high-speed rail, with 35 opposed. The project has faced criticism in recent years but the show of support could be positive sign for the ultimate completion of what would be the first truly high-speed train network in the United States. 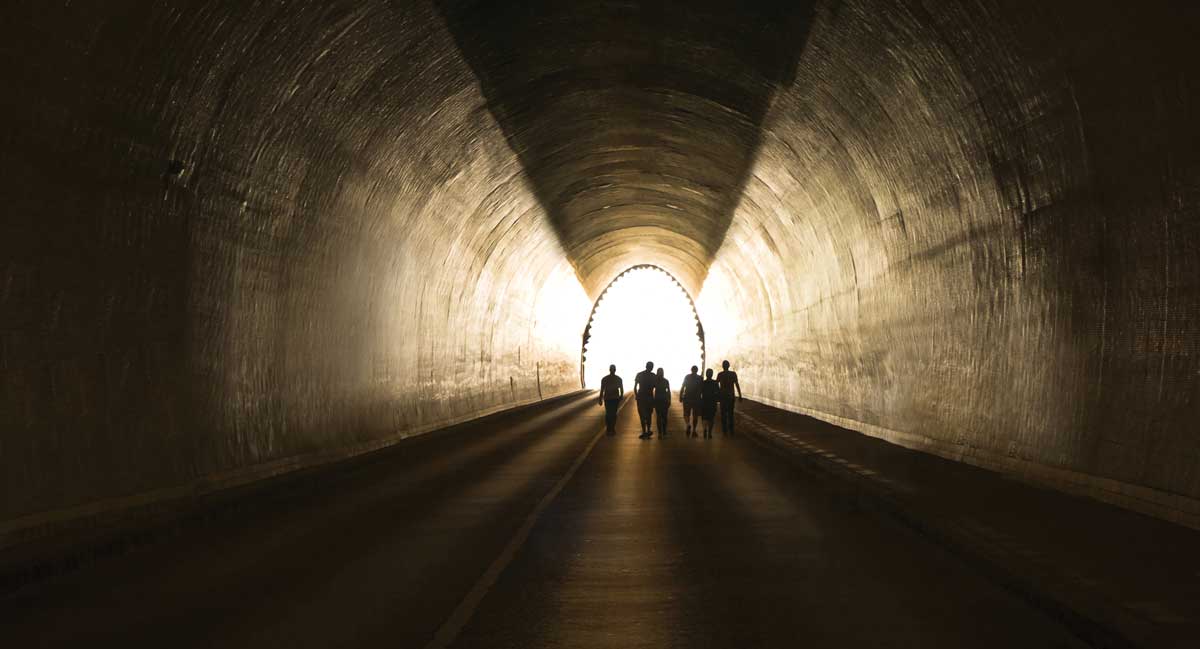 As we continue to see increasing severity of storms and weather events across the county, the need to build infrastructure to provide resiliency is also growing. A recent case in point is Houston, which, according to the National Hurricane Center, sustained $125 billion in damages as a result of Hurricane Harvey in 2017. Planners from the Harris County Flood Control District are studying a plan that would build on the order of 10 miles of large-diameter tunnels, at a cost of $1-1.5 billion, to help contain the impacts of future storms to safeguard the metropolitan area.

In Boston, planners from the Massachusetts Water Resources Authority are similarly planning a large-scale project to help protects its drinking water system. The MWRA Redundancy Tunnels would see the construction of some 14 miles of water tunnels, at a cost of about $1.5 billion, to ensure reliability of drinking water to residents in the greater Boston area. The project was precipitated by a 2010 water main break that had an estimated economic impact of approximately $310 million per day.

On a smaller scale in terms of diameter, Pacific Gas and Electric Co. in 2021 announced a major new initiative to expand the undergrounding of electric distribution power lines in High Fire Threat Districts (HFTD) to further harden its system and help prevent wildfires. The new infrastructure safety initiative is a multi-year effort to underground approximately 10,000 miles of power lines. PG&E’s commitment represents the largest effort in the United States to underground power lines as a wildfire risk reduction measure.

The Delta Conveyance Project for the Department of Water Resources (DWR) includes a tunnel through the Sacramento-San Joaquin Delta that is designed to protect water supplies from sea-level rise and saltwater intrusion into the Delta. Additionally, the project will help to reduce the risk associated with earthquakes, improve water supply reliability, and reduce impacts on local Delta communities and fish. The project, originally envisioned to include twin tunnels, is being redesigned as a single-tunnel option under Gov. Gavin Newsom, who took office in January 2019. It is anticipated that the Draft Environmental Impact Report (EIR) in mid-2022.

These recent developments reinforce an already robust market. According to presentation by Nasri Munfah at the Risk Management in Underground Construction course in April, the global tunneling market is estimated at $7.5 trillion, with annual spending in the Americas estimated at $4-5 billion annually (per ITA).

Already there are ambitious plans for tunnels across the country, some project reaching into the multi-billions of dollars. A few of the projects not previously mentioned include the Silicon Valley Santa Clara Extension in California ($5.5 billion), Sepulveda Transit Corridor Project in Southern California; the BART 2nd Transbay Tube ($12-15 billion) and SF Central Subway to North Beach (~$1.5 billion) in Northern California; the Superconducting Maglev Project – Northeast Corridor (~$10 billion) in the Baltimore-Washington area; Second Avenue Subway Phase II ($6 billion) in New York, and the Dallas D2 Subway ($1.7 billion) in Texas.

While resiliency projects seem to be on an uptick, there are ongoing and upcoming programs underway to control Combined Sewer Overflows with the help of large-diameter tunnels, with large projects coming up places including Missouri, Ohio and Pennsylvania.

While challenges remain – workforce development, supply chain issues, and others – there is reason to be optimistic about the future of tunneling in the United States and beyond.

The Tunnel Watch List was developed by UCA of SME to highlight the most important tunneling and underground construction projects in the United States. Developed by a committee based on national and regional needs, as well as social, environmental and economic impacts. Below is the 2021 Watch List: 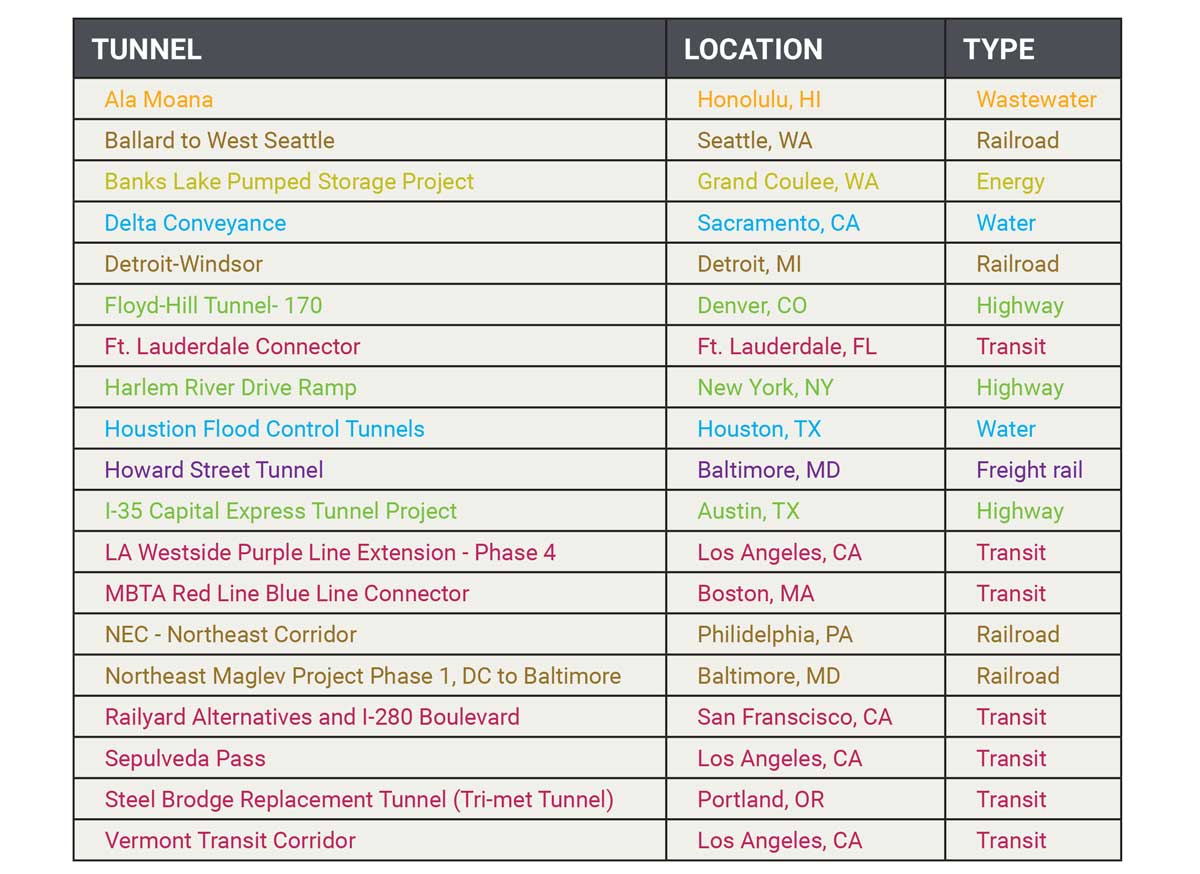