You are at:Home»Featured Stories»Building a Better Future in Los Angeles

Transportation Projects Changing the Face of Travel in Southern California

There are certain iconic images conjured up when one thinks about the Los Angeles area: the sun, the surf, the Santa Monica pier, the Hollywood sign, to name a few. Unfortunately, there is another image that many Angelenos would rather forget: clogged highways.

However, Los Angeles residents have taken matters into the own hands to reduce congestion by voting to create a robust county-wide transportation network.

Voters have overwhelmingly thrown their support behind transportation projects by passing Measure R (2008, $35 billion in funding) and Measure M (2016, $120 billion in funding based on the first 40 years of project; it has no sunset) – sales tax increases to help pay for transportation projects. Measure M, in fact, passed with 71.15 percent support.

Improving the transportation network took on even more significance in September when the International Olympic Committee awarded the 2028 Summer Olympics to Los Angeles, which will host the games for a third time.

Measures R and M cover all sorts of transportation projects, from highways, road and bridge improvements to expanded bus services and improved signaling – even cycling infrastructure, aka active transportation. Integral to that strategy is building out rail service.

On the Right Track

The Los Angeles County Metropolitan Transportation Authority (Metro) began offering transit rail services with the opening of the Blue Line in 1990. In 1993, Metro opened the first segment of the Red Line, which now connects Union Station to North Hollywood. The Red Line was extended twice, with the most recent segment opening in 2000. Following construction of the Red Line, Metro commissioned the Green Line (1995), Pasadena Gold Line (2003), Eastside Gold Line (2009), Expo Line (2012) and the Gold Line Extension to Azusa and Expo II to Santa Monica (2017). Los Angeles inter-connects its rail system with a network of busses to provide transportation across the metro area.

With the passage of Measure R in 2008, the agency began construction on its current wave of expansion, which includes three major projects that include underground construction and tunneling: Crenshaw/LAX, Regional Connector and the Purple Line Extension.

“This is a continuous process; we are incrementally building up our overall network,” said Bryan Pennington, Deputy Chief Program Management Officer for Metro, the agency responsible for the work. “These three projects are part of the process of putting the pieces of the transportation jigsaw puzzle together as we connect our network with key venues.”

Crenshaw/LAX was the first of the latest wave of projects with underground components to move forward. Crenshaw/LAX, with an overall budget of just over $2 billion, is an 8.5-mile light-rail line with eight stations that will run between the Expo Line on Exposition Boulevard and the Metro Green Line. NTP was issued in September 2013 with revenue service expected by fall 2019.

The project includes twin bore tunnels, about 1-mile long each, connecting three underground stations. The tunnel is 21-ft OD (19-ft ID) and is approximately 70 ft below ground. Ground conditions are soft ground/alluvial, leading to the choice of an EPB TBM.

The main construction contract was awarded to Walsh/Shea Corridor Constructors, a joint venture comprising Walsh Construction and J.F. Shea Co. Overall the project is 80 percent complete with all tunneling complete. Current construction activities include a tie-in to the Green Line and heavy civil construction for the underground stations. Systems, and trackwork have begun, and infill work on the stations to follow.

Included as part of the overall project is the Southwestern Yard project, a $170 million operations and maintenance facility being constructed by Hensel Phelps/Herzog JV. The Southwestern Yard is designed, constructed and equipped to perform service and inspection, heavy repairs, blow-down, body repairs, painting, storage, cleaning, and washing of light-rail vehicles (LRV) in the Metro fleet; as well as facilities for general administration, maintenance and storage. Completion of the yard, which is integral to the operation of the new Crenshaw/LAX line, is anticipated in late 2018. Hensel Phelps/Herzog JV also constructed three piles and columns for a future Automated People Mover project by Los Angeles World Airports (LAWA) that will connect Los Angeles International Airport (LAX) with the Crenshaw/LAX line.

Ridership along the corridor is projected at 31,000 daily boardings by 2035. Future plans include extending the line north to connect with the Purple Line and ultimately the Red Line. 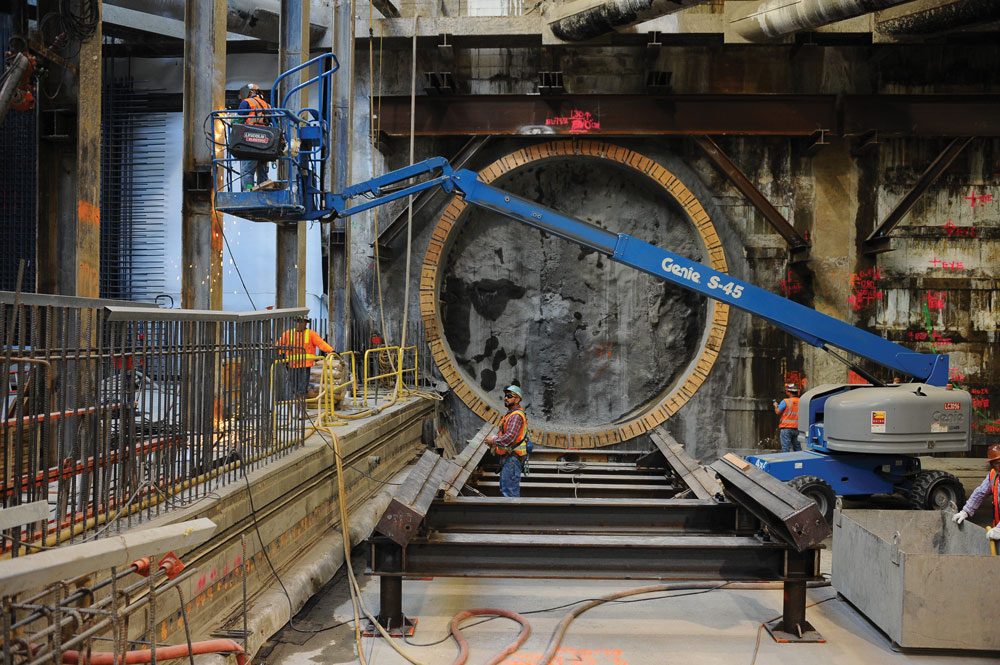 Crews prepare for a breakthrough on the Crenshaw/LAX project. The line is expected to begin revenue service in fall 2019.

The 1.9-mile Regional Connector is a key project linking four distinct lines and creating a one-seat ride north-south from Azusa to Long Beach and east-west from East Los Angeles to Santa Monica. “The Regional Connector is a game-changer for the transportation system,” Pennington said. “It forms a north-south/east-west backbone and connects to the rest of the system in a number of different places, including Union Station. Anyone traveling to or through downtown Los Angeles will be able to save about 20 minutes off their commute. It is a huge benefit.”

The $1.75 billion project was awarded to Regional Connector Constructors, a joint venture comprising Skanska and Traylor Bros., in 2014. The tunnel depth ranges from 25 ft to approximately 120 ft and crosses below the existing Metro Red Line heavy rail tunnels with less than 7 ft of clearance. The Regional Connector includes approximately 2,100 ft of cut-and-cover and retained cut guideway, a 300-ft crossover cavern, and three cut-and-cover subway stations. The crossover cavern is Metro’s first experience with SEM.
The project is approaching the 50 percent completion mark overall. All TBM tunneling has been completed, with the final hole through occurring in December 2017. Since completion of tunneling, crews have turned their attention to station work. In addition, crews are in the process of performing underpinning work for the Los Angeles Times building from within the excavation at 2nd/Broadway.

The forecast completion date is December 2021, with ridership expected to reach 90,000 daily boardings by 2035. 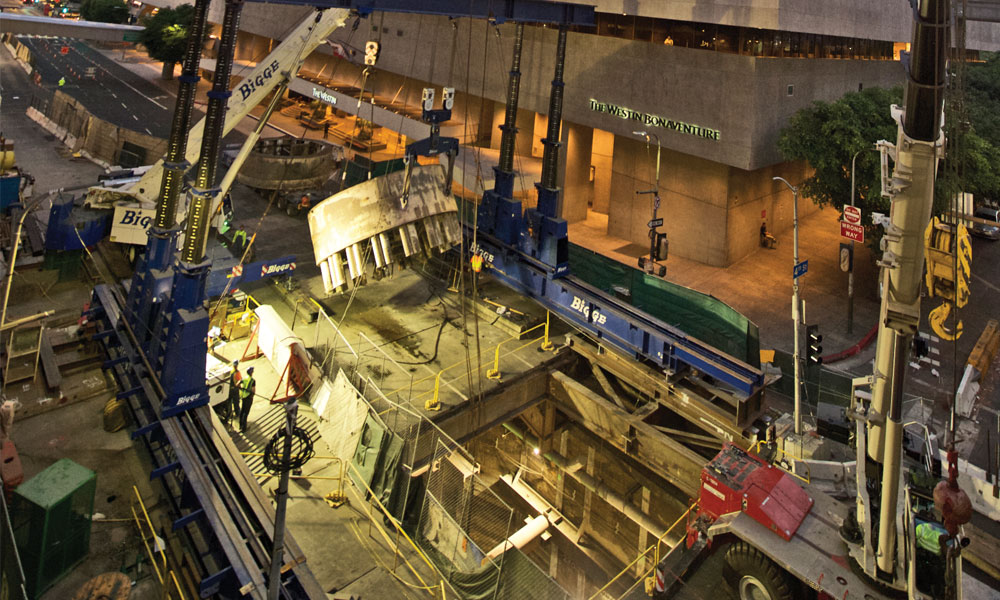 The Regional Connector will provide a vital link in downtown LA.

The Purple Line Extension comprises 9 miles of twin bore tunnel section that will extend the existing line at its terminus at Wilshire/Western westward through Beverly Hills and into West Los Angeles. The roughly $9 billion program is being built in three separate phases.

Phase 1 – Phase 1 involves extending the Purple Line 3.92 miles from Wilshire/Western to a new station at Wilshire/La Cienega. It also includes stations at Wilshire/La Brea and Wilshire/Fairfax. The project includes the western retrieval shaft and 23 cross passages.

The $1.636 billion tunnel and stations contract was awarded to a joint venture of Skanska, Traylor Bros. and J.F. Shea Co. in 2014. The project is about one-third complete, with TBM tunneling expected to begin this August. The launch shaft is about 50 percent complete, and excavation is underway at all station locations.
The forecast completion date for Phase 1 is 2023.

Phase 2 – The $1.37 billion Phase 2 tunnels and stations contract was awarded to a joint venture of Tutor Perini and O&G in 2017. The second section will add another 2.6 miles to the Purple Line with one station at Wilshire/Rodeo in downtown Beverly Hills and a station in the heart of Century City.

The project is 6 percent complete overall, with the design about 50 percent complete. Current construction activities include advanced utility relocation. Completion of Phase 2 is expected by 2025.

Phase 3 – Phase 3, which falls under Measure M’s expenditure plan, is currently in procurement. Unlike Phases 1 and 2, Metro is releasing separate contracts: one for tunneling and one for stations, trackwork and systems. Phase 3 comprises 2.59 miles of twin bore tunnel and stations at Westwood/UCLA and Westwood/VA Hospital. The project budget is approximately $3 billion.

Project completion is anticipated by 2026. Phase 3 is particularly important for the 2028 Olympics as UCLA will be one of the main venues. 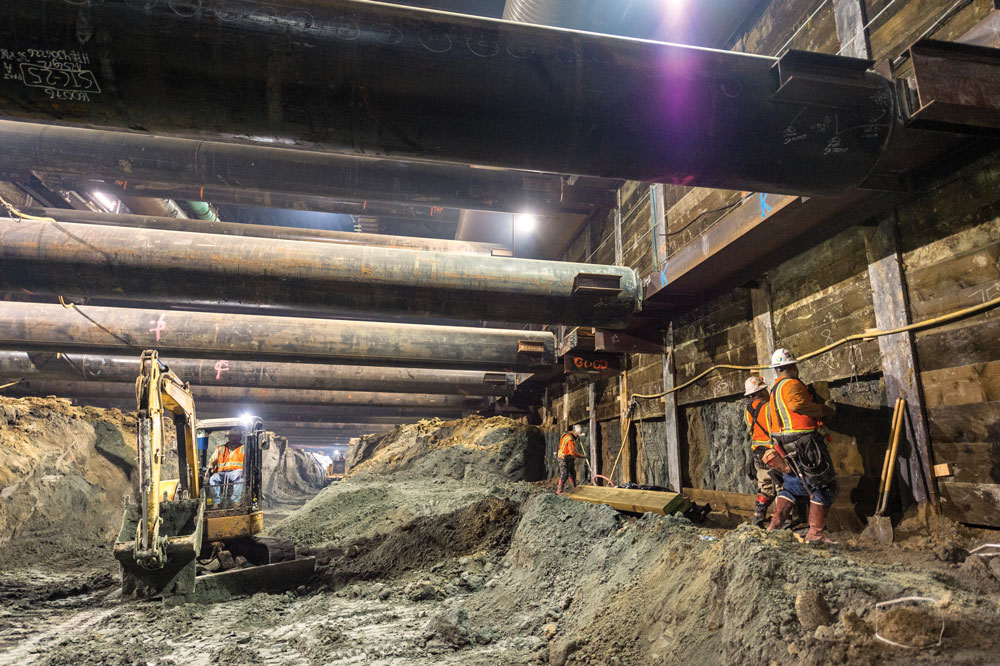 The Purple Line Extension comprises 9 miles of twin bore tunnel section that will extend the existing line at its terminus at Wilshire/Western westward through Beverly Hills and into West Los Angeles.

With a wealth of recent experience, Metro is in the enviable position of fine-tuning how it manages projects based on first-hand knowledge. For the Measure R projects – Crenshaw/LAX, Regional Connector and Purple Line Extension – Metro used design-build procurement for major underground works. While used more routinely outside of the United States, Metro was one of the first U.S. agencies to use design-build for a major underground transit project.

“Design-build is a contract delivery method that in the appropriate context can be extremely successful for large transit projects,” Pennington said. “In fact, I was involved on one of the first commercial applications of design-build in transit in the 1980s in the United Kingdom, so there is a long track record of success. Of course, it is like any other delivery method; it is a tool, and you need to choose the right tool for the right application.”

Metro still employs a range of delivery methods, including design-bid-build, and is looking at potentially using CM/GC and/or P3 in the future. In determining a procurement method, Metro has adopted a formal process that includes a checklist of items to consider, including project size, project type, budget, schedule, complexity, interfaces, stakeholders, third parties and more.

The geology in the Los Angeles basin comprises fill, alluvium, sands and silts, as well as San Pedro and Fernando formations. The area is also potentially gassy and has areas of seismicity and faults. Based on Metro’s experience, it requires the use of closed-face tunneling machines to navigate the ground. In the most recent projects, all of the contractors ended up using earth-pressure balance TBMs, and with favorable results.

Metro is evaluating the prospects of using P3 for future projects. Parsons Transportation Group and Cintra each submitted proposals to Metro that would accelerate construction of the Sepulveda Pass project. Metro also received proposals each from Skanska and Kiewit for the West Santa Ana Branch project. The Measure M plan has identified nearly 50 projects that will help Los Angeles create a world-class transportation network.

Airport Metro Connector – Metro is planning a new transit station that will connect the Los Angeles International Airport (LAX) to the regional transit system via an Automated People Mover (APM). Construction is expected to begin in 2018.

West Santa Ana Branch Transit Corridor – The project is a new 20-mile light rail transit line that would connect downtown Los Angeles to southeast LA County. The project is anticipated to break ground in 2022.
Gold Line Extension 2B – The project will extend the Gold Line east from its current terminus in Azusa for 12.3 miles. A ground-breaking ceremony was held on Dec. 2, 2017. The extension is planned to open in 2027.

East San Fernando Valley Transit Corridor – Metro is evaluating the feasibility of a mass transit project that would operate from the Van Nuys Metro Orange Line Station north to San Fernando – a distance of 9.2 miles. A record of decision is expected by the end of 2018.

Sepulveda Pass Transit Corridor – Metro is conducting a feasibility study to identify and evaluate a range of high-capacity rail transit alternatives between the San Fernando Valley and LAX, including connections to existing and planned Metro bus and rail lines. A number of alignments and station locations will be considered. The Study is expected to take approximately 20 months, concluding in Summer/Fall 2019.

Green Line Extension – Metro is studying passenger transit service options along a 4-mile segment of the Harbor Subdivision Corridor from the existing Redondo Beach Marine Station to the proposed Regional Transit Center (RTC) in Torrance. Construction would start in 2026.

East Side Transit Corridor – Metro is studying three project alternatives to extend the Metro Gold Line further east from its current terminus in East Los Angeles. A Supplemental/Recirculated Draft EIS/EIR is anticipated to be available for public review in mid 2020.