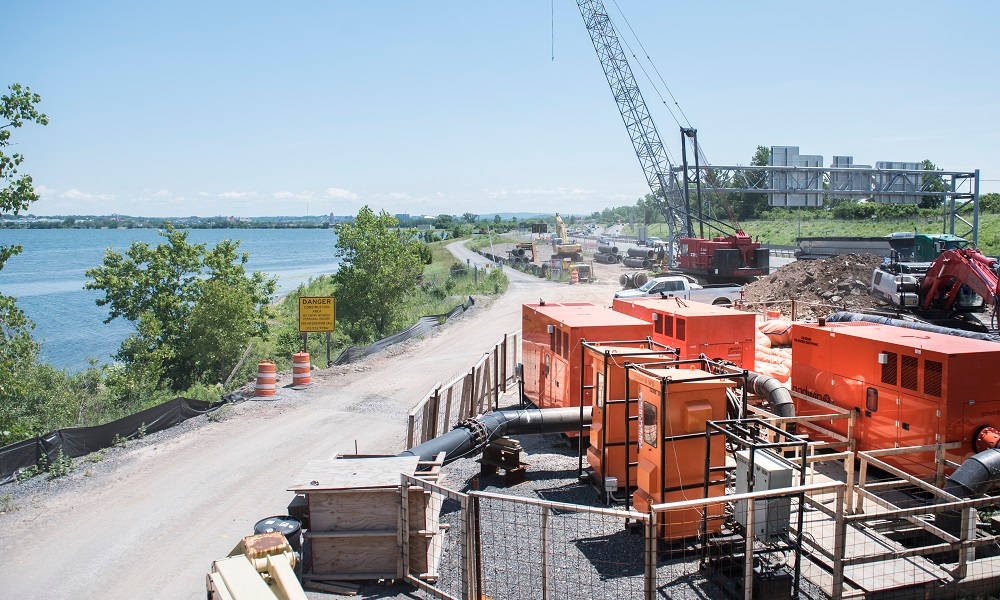 When the West Side sewage pump station in Onondaga County, New York, prepared to undergo its first major upgrade in over 30 years, the project required a bypass system to move a peak flow of 30 million gallons per day (MGD). C.O. Falter Construction was named the bypass contractor for the project and worked with Xylem to design and install a temporary system to convey the full amount of flow.

While the initial design called for using the station’s existing pumps, during a plan review, a dewatering application engineer with Xylem calculated that the existing pumps would only bear 19 MGD of water.

“After determining that the initial design missed the target by 25 percent, it became apparent the job would require a temporary bypass system to meet the max flow capacity,” said Darrin Ruiz, Northeast Regional Applications Engineer for Xylem.

The updated design called for a bypass system that stayed within the same footprint as the original pumps.

“Based on the specs, the footprint was very limited,” Ruiz explained.

Additionally, the pump station is located in between Interstate 690 and Lake Onondaga and overlooks the New York State Fairgrounds, which hosts hundreds of events throughout the year.

“It’s a high visibility area and loud diesel equipment would not have been appreciated,” said Ruiz.

To stay within the compact station area, Xylem used two Flygt N 3312 pumps that could plumb into the existing piping system, resulting in material cost savings for the customer.

In addition to the two Flygt N 3312 pumps, the bypass system installed by Xylem and C.O. Falter Construction at the West Side pump station also included three Godwin Dri-Prime CD300M pumps, which emit only 69 decibels at 30 feet, reducing noise pollution.

“When the equipment is running at full speed it’s hard to hear,” said Ruiz. “The highway in the background is actually louder than the equipment.”

One Godwin CD300M pump was set up on grade and away from the construction area, with the other two diesel-driven pumps serving as backups.

The contractor and project owner also needed to be able to check that the system was running smoothly for the duration of the bypass, so a Godwin advanced remote monitoring and control panel was provided to continuously collect data from the VFD and transducer.

The bypass system went online in March 2018 and ran 24/7 through September 2018. It was set up to emulate the response and flows of the plant’s permanent equipment, and remote connectivity enabled the various parties involved in the project to continually monitor the pumps from any location via a smart device.

The remote monitoring capability was especially helpful when the project first got up and running and fluctuations in the water flow varied widely due to the shifting student population at nearby Syracuse University.

“Syracuse is a huge college town so there were higher flows when school was in session and then capacity dropped in the summer,” said Ruiz. “That’s the beauty of remote monitoring. We can watch the equipment and do troubleshooting as needed without having to be onsite.”

Xylem’s customer, C.O. Falter Construction, noted the ease with which anyone involved in the expansion and upgrade project could monitor the system in real time from remote locations.

“It’s pretty slick,” said Dan Falter, project manager for C.O. Falter Construction. “If a pump goes down, we’re alerted even if we’re not onsite. The remote monitoring capability provides peace of mind, which is everything.”

A successful temporary bypass setup that operated continuously for seven months provided a reliable, cost-effective, long-term solution while crews expanded and upgraded the pump station. Additionally, the solution allowed the project owner and contractor to monitor flow rates and responses in real-time from any location.