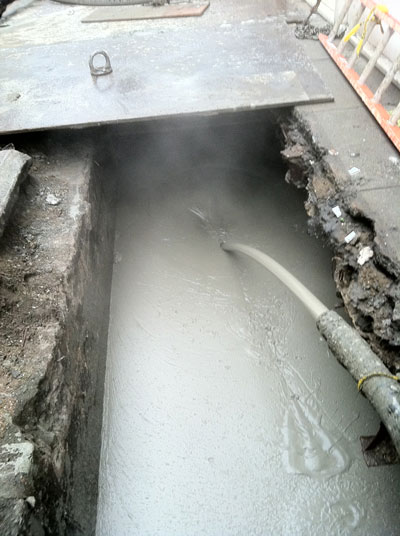 Despite the fact that cellular concrete has been in the construction industry for nearly a century, it is not uncommon for people in construction to be unfamiliar with this versatile product. “What is this stuff?” and “Why haven’t I heard of this before?” are common questions.

The primary reason it has gained popularity so slowly in the civil market is that the cellular industry pursued work in the vertical side of the industry, focusing on flooring and roofing for the last 50 years. Now that the cellular concrete providers are casting a wider net due to the recent downturn in the economy, the civil world is seeing the benefits and the variety of uses are expanding daily.

A recent rumor was heard about a patent from 1923. If proven true it shows that the origins of cellular concrete go back to at least 1923 and before. The actual origins of cellular concrete remain a mystery, but it has been widely believed that it was developed in Europe (possibly Germany) in the 1940s and brought to the United States in the 1950s as a lightweight floor leveling product used in high rise construction.

What Is Cellular Concrete?

Cellular concrete is a carefully crafted mixture of cement, water and preformed foam. This material is mixed to a specified density and pumped into any void.The fundamentals are simple but the applications and ability to mix properly and at high production rates make is very challenging.

The highly specialized equipment varies by contracting company. Each has spent years developing its own variation of high-production equipment. The equipment cannot be purchased off the shelf and must be custom made. There is a network of foam manufacturers and highly trained specialty contractors available for grouting needs anywhere in the country.

In many areas of the country state departments of transportation (DOTs) have developed standards for cellular concrete and many others are in development right now. Large agencies, such as the U.S. Army Corp of Engineers and the California DOT (Caltrans), are steady consumers of this product. More agencies are learning about the benefits every day and the cellular concrete industry hopes that it will be common in all 50 states.

Where Does It Go?

Basically this material is pumped into any void, hole or backfill. It is highly fluid and easily pumpable. The biggest challenge is keeping it from leaking by constructing proper bulkheads or formwork and appropriate venting to exhaust the air.

This material is standard in tunnel and pipeline grouting in many parts of the country. It has been pumped very long distances in a single run and the runs keep getting longer as specialty contractors continue to explore the limits, refine techniques and mix designs and push farther. The current record is 20,060 by Pacific International Grout at the Arrowheads Tunnels Project in Southern California. The basic limitation is simply cure time and pumping rate. Cell-Crete follows a simple rule set for itself in which the company should not pump for longer than four hours on a particular run of pipe. This means that a simple volume calculation using the installer’s production rate will determine how long of a run can be placed in one shot. The longer the run, the less excavation is needed, saving the general contractor money.

While cellular concrete has many applications, this article is focused on its use in conjunction with the installation of new utilities. It is often used as a low-strength filler material for pipeline abandonments. It is used as a structural grout in sliplines between the existing host pipe and the new carrier pipe. It is used as tunnel backfill when a new pipeline is placed inside a tunnel. It is also used as trench and bore pit backfill. Cellular Concrete is also used for low cost, lightweight foundation fills for buildings, roadways and rail lines. All of these uses are related, but vary in the benefits provided by the cellular concrete. The primary benefits are highly flowable, light weight, and low cost.

There is a long list of public agencies and private developers that have used cellular concrete, including major tunnels backfilled with cellular concrete. This product is being used in all facets of construction and saving dollars for the clever general contractors who know how to apply it.

Why Use Cellular Concrete?

So why do we use cellular concrete in grouting tunnels and pipelines? The material is superior to traditional sand and cement grouts in several ways. The cellular grout is much lighter in density and hence creates less buoyant force on the pipe, saving the pipe installer money by using less supports during grouting. It is highly flowable and can be pumped down a hose or slickline into a very long tunnel and placed directly into the void. The material is made on the jobsite and immediately placed, allowing for very high volume placement rates. The strength of cellular concrete is directly correlated to its density and can be designed per project specifications anywhere from 40 psi to 1,000 psi. 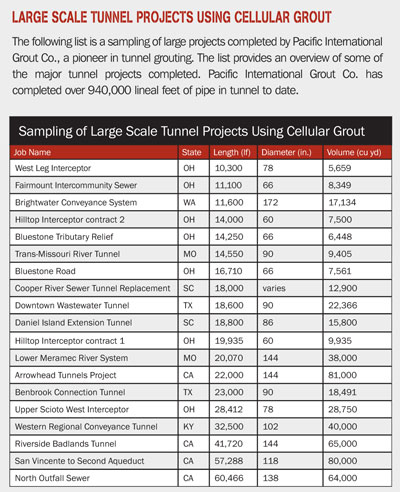 Finally, cellular concrete is less expensive that traditional grouts because one of the major components is air. This eliminates the need for quarries, trucks, excavators, loaders, etc., in the excavation and handling of large quantities of mined aggregates. The cost is solely derived from the cost of cement, water, foaming agent and the labor and specialty equipment needed. An additional bonus on the pricing is that this material is generally placed at high rates and high daily volumes. This reduces the associated costs in traffic control, supervision, dewatering and any other support service that may be reduced by completing the job quicker.

Cellular concrete is an excellent modern green material for use in everyday construction with a relatively low carbon footprint. Did you know all cement-based products absorb carbon from the atmosphere for the duration of their life? They molecularly attempt to regain the carbon that is lost in the creation of the cement and this provides a long-term benefit in the war against CO2 emissions.

The various benefits are highlighted in the utility industry and with pipeline and tunnel backfill work. It is readily available from regional specialty contractors who provide a wealth of knowledge and experience.

Scott M. Taylor, PE, MBA, is President for Throop Cellular Concrete. He can be reached at Scott@cellularconcrete.com.