The 100-mile-long Atoka Pipeline connects the Atoka Reservoir in southeast Oklahoma to Lake Stanley Draper Reservoir on the outskirts of Oklahoma City. Originally constructed in 1962 to provide a reliable source of water for the growing city, officials are looking once again to increase capacity and reliability as they lay out plans for the future.

One key component for the project owner, the Oklahoma City Water Utilities Trust (OCWUT), is the construction of a second Atoka Pipeline. The project includes the replacement of an existing water line and the construction of a new line to increase the amount of water that can be transmitted from the Atoka Reservoir. It is one of the largest pressure pipeline jobs in America, helping to serve more than 1.4 million residents in central Oklahoma.

The overall pipeline project includes a tunneling portion under the Canadian River near Byng, Oklahoma. The Canadian River Crossing consists of four microtunneling drives with the installation of 72-in. diameter reinforced concrete pipe and 84-in. diameter reinforced concrete pipes serving as casings. The total length of all four drives will be approximately 5,775 lf (each drive is approximately 1,500 lf). The four tunnel drives will be launched from two adjacent central shafts.

Upon completion of the microtunneling drives, 72- and 60-in. welded steel carrier pipe will be installed for raw water transmission from the Atoka Reservoir to Oklahoma City. Two 34-ft diameter central shafts will be excavated to a final depth of 125 vf and supported by 70 vf of secant pile installation and 55 vf of liner plate installation to shaft bottom. Due to the project’s remoteness, over 5,500 lf of construction road was installed to access the project site.

The slopes for the 84- and 72-in. microtunnel drives are 8.6% and 7.5%, and 8.6% and 8.2%, respectively. Two of the tunnels cross underneath the Canadian River all while tunneling beneath the groundwater table. Hard rock conditions in the shaft were excavated using a drill-and-shoot method in combination with an excavator and Epiroc roadheader attachment. Upon reaching the bottom the shafts, two launch portals 6-ft deep will be excavated and supported with steel sets to initiate launching of the MTBM.

The microtunneling portion of the project was awarded to Vadnais Trenchless Services Inc., a Primoris Services Corp. company, for $29.5 million. As of late February, crews were nearing the completion of drill-blast shaft excavation with tunneling expected to begin in early April.

Once tunneling begins, the geology is expected to test the tunneling crews, according to Steve Barry, senior estimator and senior project manager for the Atoka project. “When we break out of the shafts, we’ll be entering 12,000 psi limestone, then transitioning to shale and then into river alluvium,” he said. “Because of the challenging conditions, we are incorporating a cutterhead that uses a combination of disc cutters, button cutters and scrapers, in combination with powerful jetters to help clean the face as we progress.”

Vadnais Trenchless worked closely with the machine manufacturer, mts Microtunneling Systems GmbH, to ensure the machines were equipped with the optimum cutting tools, as well as ensuring they were configured to accommodate the uphill drives. Crews are using an mts 1850 MTBM (88-in. OD) and mts 2350 (102-in. OD) to construct the new tunnels.

Additional considerations included the use of double entry portal seals to combat the 110 ft of water head of the nearby Canadian River.

Two 34-ft diameter central shafts will be excavated to a final depth of 125 vf.

For the Canadian River Crossing section, Thompson Pipe Group was contracted to manufacture 72- and 84-in. RCP jacking pipe; 3,000 linear feet of each. Each RCP joint will be 20 ft long and weigh more than 58,000 lbs. Additionally, Thompson will provide more than 10,000 pieces of 72-in. polyethylene-coated and cement-mortar lined steel pipe for the project.

According to Carl Pitzer, trenchless manager for Thompson Pipe Group, the reinforced concrete jacking pipe for the Canadian River Crossing was manufactured using the wet-cast method. “For microtunneling jobs that are more technically challenging, we manufacture reinforced concrete microtunneling pipe using the vertical wet-cast method. This microtunneling pipe has a higher water-to-cement ratio than dry cast pipe, is more consolidated, and includes a special spigot with a gasketed groove,” Pitzer said. “As microtunneling alignments are becoming more complex in design, we are seeing more and more demand for this type of pipe.”

Due to the large nature of the shafts, Thompson was able to provide pipe lengths of 20 ft, vs. a length of 10 ft that may be more typical in urban locations with tighter workspace restrictions. The pipe for the crossing was outfitted with specially designed gaskets to handle the 120 ft of water head.

In addition to the RCP and steel liner for the Canadian River Crossing, Thompson Pipe Group was contracted to provide the steel pipe for the entire 100-mile Atoka Pipeline project. 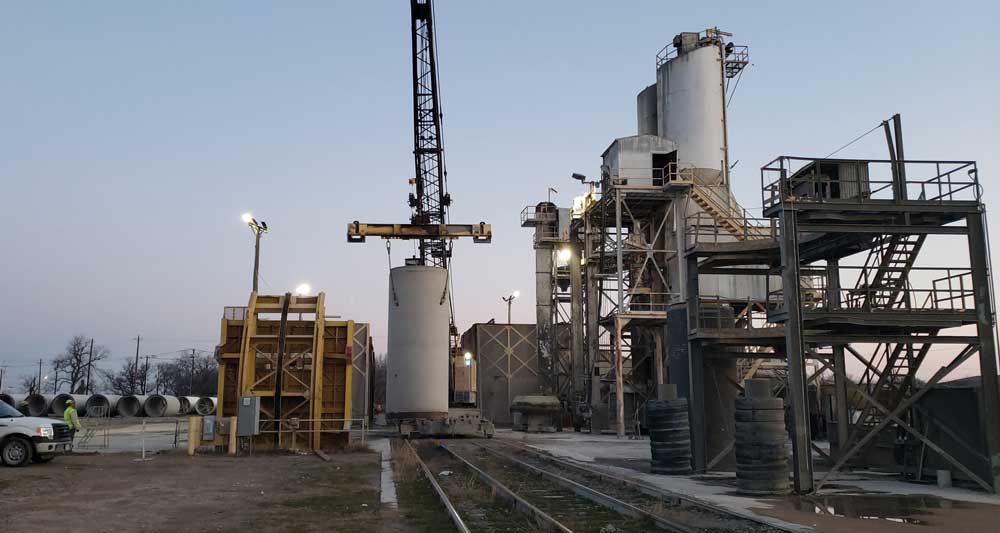 Tunneling for the Canadian River section of the Atoka Pipeline is anticipated to be complete by the end of 2021, with final project completion expected by fall 2022.

“This project is special to us,” said utilities director Chris Browning. “More than 60 years ago, our city leaders saw fit to expand our water footprint beyond the drought-prone prairie lands where Oklahoma City got its start in 1889. Now, as our service area continues to grow, it’s time to expand upon our current infrastructure and build a new line that will ensure the resiliency of our raw water delivery system for future generations.”

When completed, the Atoka Pipeline is expected to meet projected needs of Oklahoma City and central Oklahoma through 2060.