On Dec. 6, 2018, the New York City Department of Design and Construction (the DDC) awarded the SE-859 capital project to Northeast Remsco Construction Inc. (NRC). The purpose of the project was to alleviate flooding, improve overall drainage, and improve the quality of drinking water in the Maspeth section of Queens, New York, by replacing old water mains, reconstructing combined sewers, and adding additional capacity.

To accomplish this, the project scope includes 6,100 ft of water main, 1,700 ft of combined sewers, 105 precast manholes and catch basins. In addition, the primary open-cut components of the project were the installation of 1,400 ft of 5-ft x 8-ft concrete box culvert, 210 ft of 12-ft x 8-ft concrete box culvert, and 210 ft of 96-in. reinforced concrete pipe (RCP), as well as the construction of 12 large cast-in-place concrete chambers/special manholes. Secant pile underpinning was installed within inches of three active businesses to protect the structures during the open-cut installation of the box culvert. 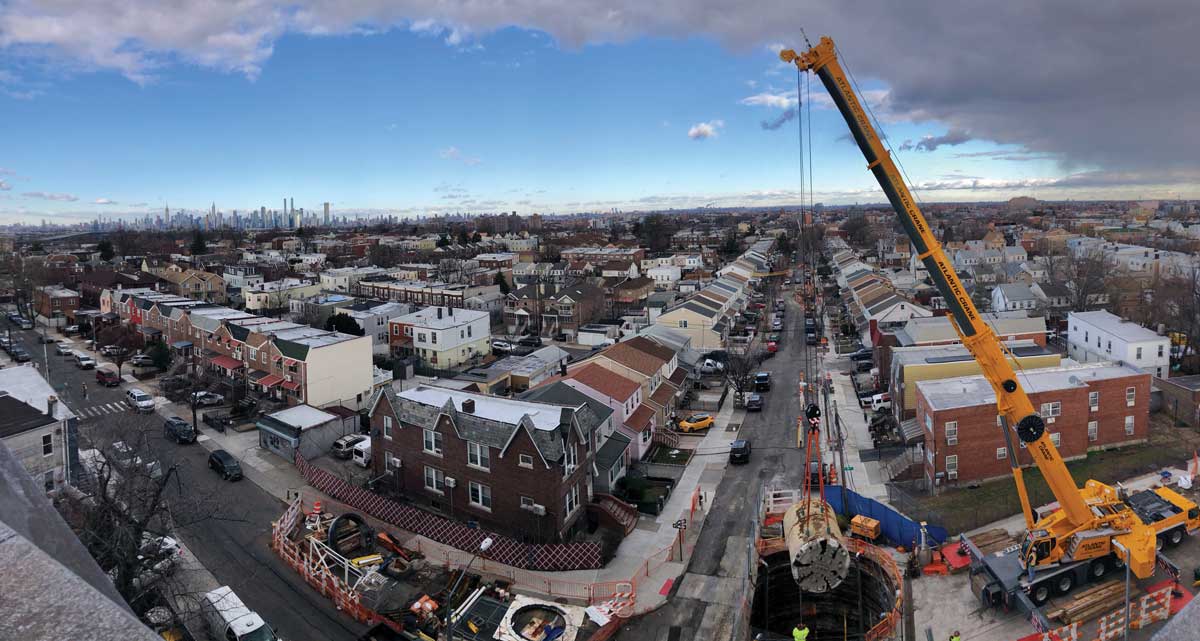 The new 96-in. gravity sewer was up to 65 ft deep, so the owner required most of the sewer to be installed with microtunneling. The 3,425 ft of microtunneling beneath the narrow streets of this urban neighborhood consisted of nine drives through mostly sand and gravel with occasional cobbles and boulders.

After evaluating the challenges associated with staging the support operations at each jacking pit, NRC decided to combine three of the drives into a single 1,600-ft drive. NRC developed an aggressive lubrication plan with one injection pump providing bentonite at the leading edge of the tunneling effort while a second pump injected bentonite along the pipe string. In addition, NRC installed two intermediate jacking stations (IJS) to supplement the 1,100 tons of thrust provided by the main jacks. Even with these measures, the jacking forces exceeded 1,000 tons and both IJSs were used due to encountering looser than expected ground that had a tendency to collapse around the pipe. 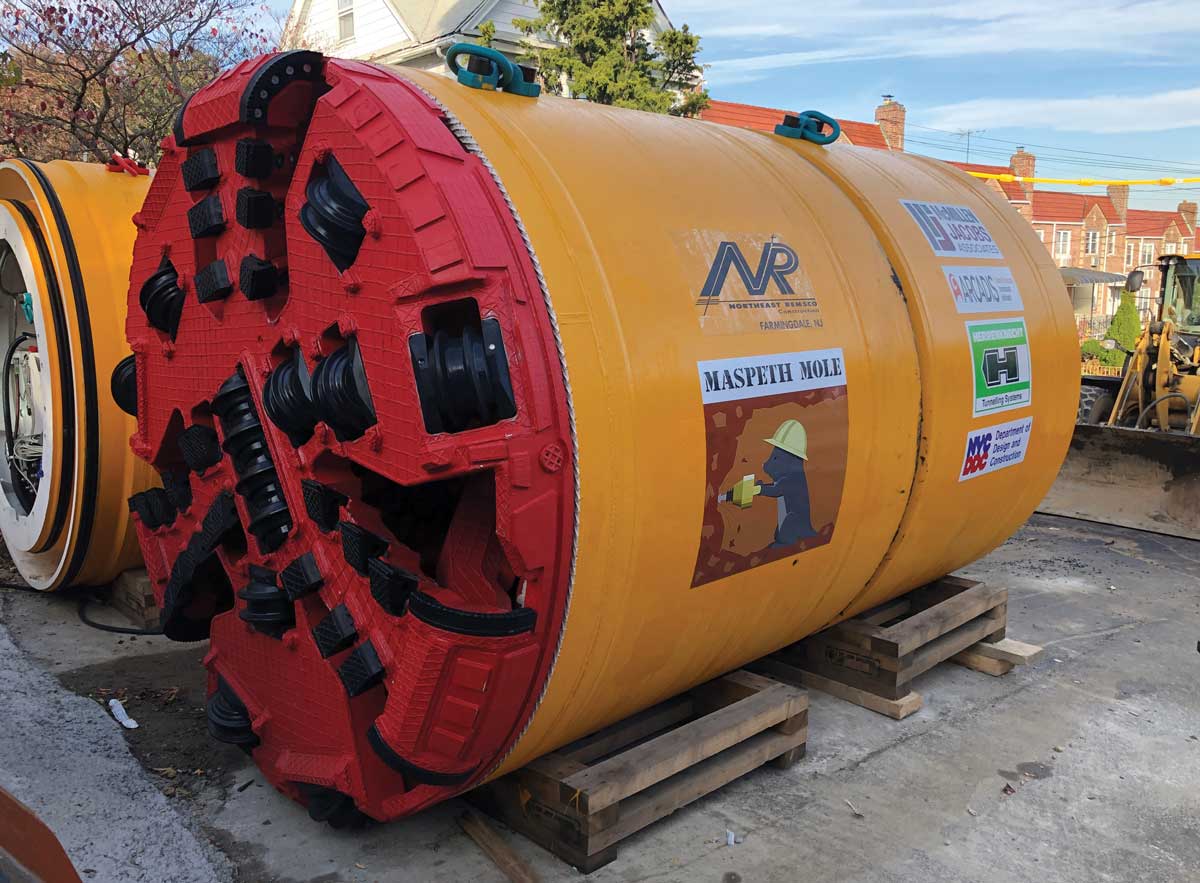 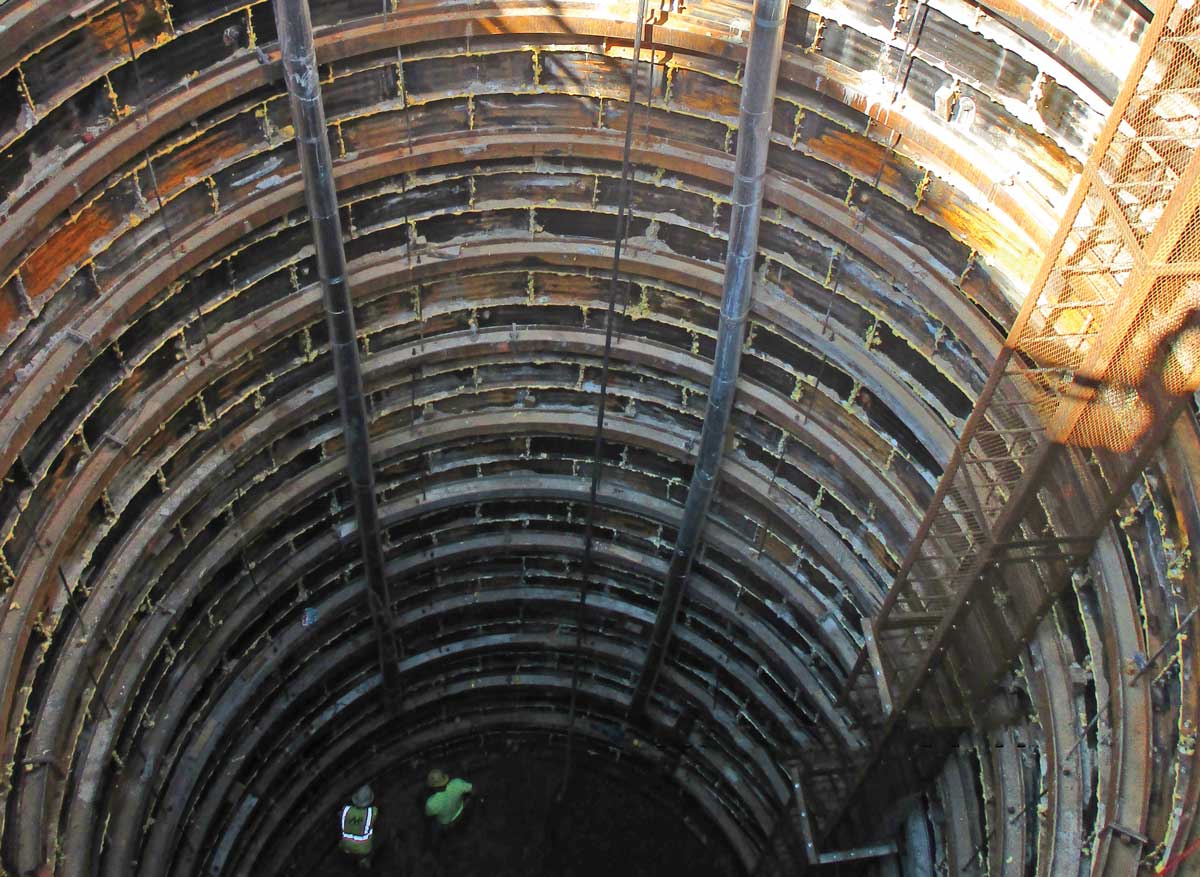 Several support of excavation options were considered for the microtunneling jacking and receiving pits, but the final choice was to use liner plates. With their zero-vibration installation, liner plates were well suited to this project since the shafts were so close to houses and commercial buildings. Another consideration was that even though the shafts were deep, there was no groundwater to contend with.

Despite a comprehensive subsurface investigation confirming the presence of sufficient silt for the ground to “stand-up” long enough for each ring of liner plate to be installed, NRC discovered the ground to be inconsistent thus requiring each ring to be back-grouted as it was installed. Also at several locations NRC encountered lenses of loose sand that had no stand-up time. These zones had to be stabilized with permeation grouting. 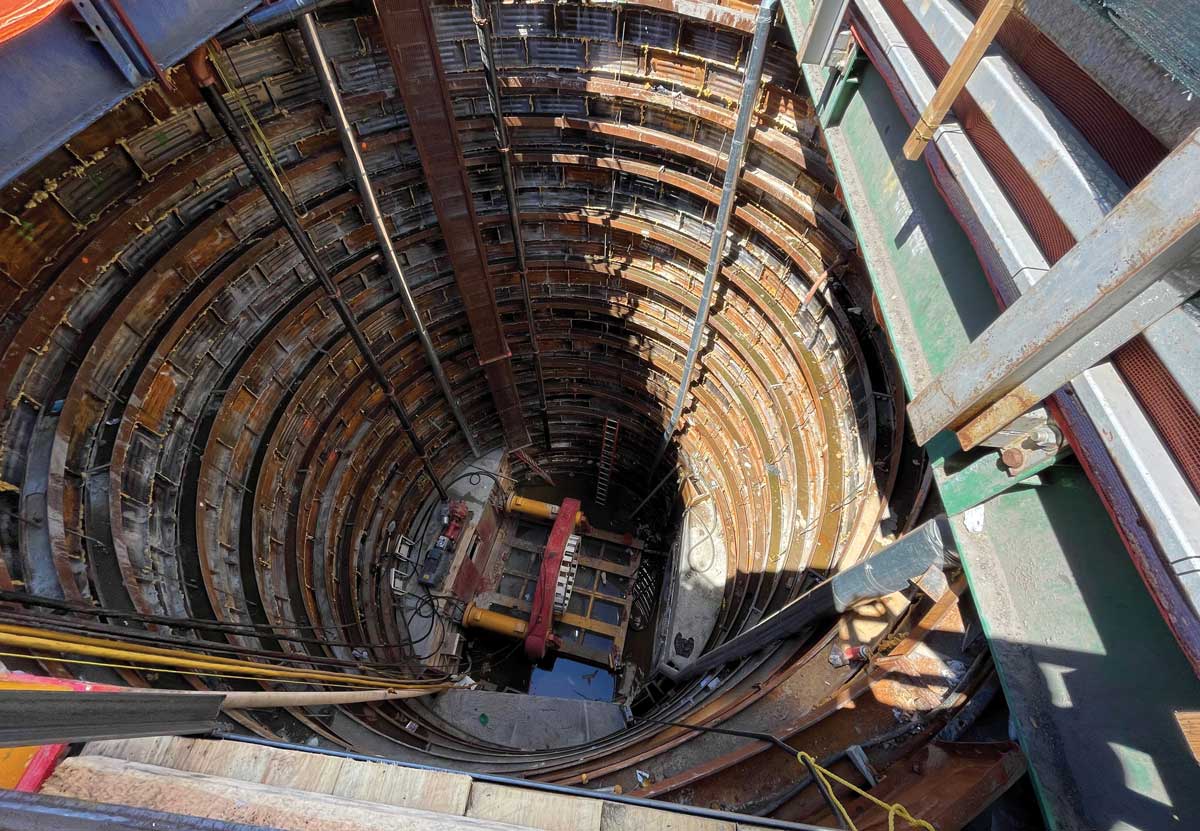 The jacking pits were 30 ft in diameter, while the receiving pits varied from 20 to 28 ft in diameter, depending on the follow-on work required at each location. The shafts ranged from 40 to 65 ft deep making access and egress challenging. King beams and bracing were added at each portal opening cut through the liner plates to transfer the SOE compression loads across the opening. To mitigate surface settlement and provide face stability during the MTBM launches, NRC hired Keller to improve the ground outside each portal by permeation grouting with sodium silicate.

Much of the microtunneling work took place through residential neighborhoods on streets only 30 ft wide. The successful staging of the support equipment and slurry processing plant, as well as the movement of each 18.5 ton 10 ft long section of 115.5-in. OD pipe along the streets was accomplished through creative traffic management and comprehensive community outreach.

One drive was down the middle of Grand Avenue, a main thoroughfare with parking lanes, bike lanes and travel lanes. The traffic was split to accommodate the shafts that were centered in the roadway. There was insufficient room to maintain the traffic lanes around the shafts in a traditional manner, so NRC used decking placed across the edges of the shafts to provide the necessary lane width while maintaining sufficient open space in the middle of the shaft in order for the microtunneling work to proceed unencumbered. 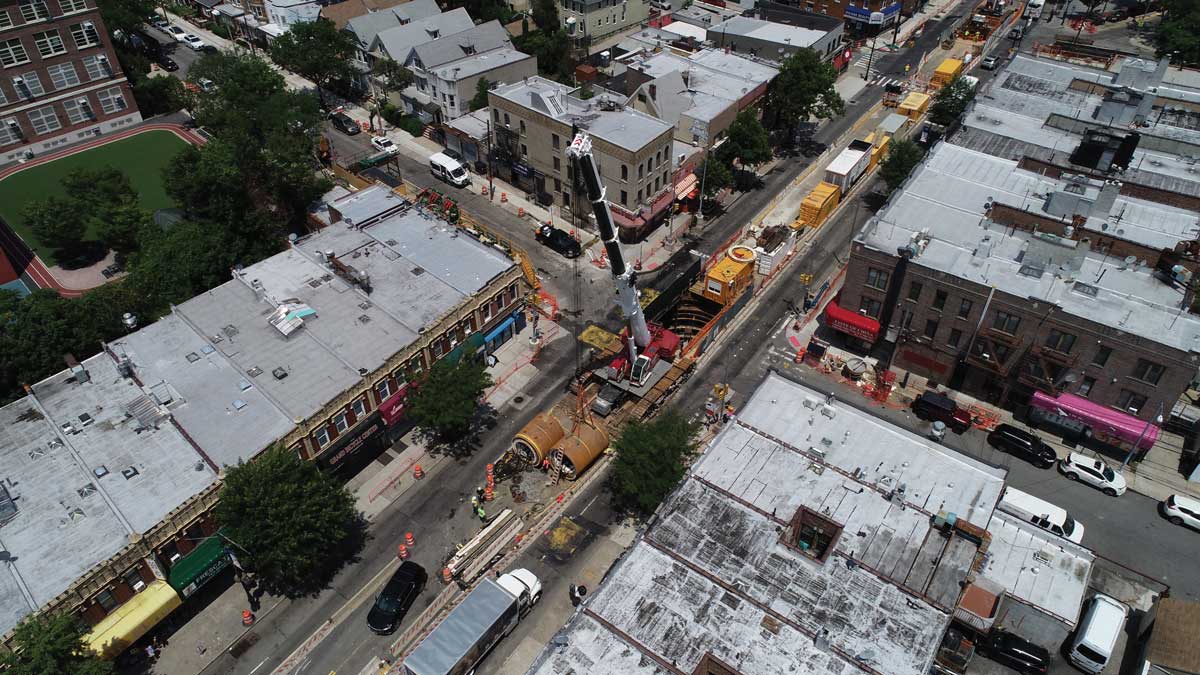 Maintenance of traffic around microtunneling operation on Grand Ave.

Part of the open-cut installation of 12-ft x 8-ft box culvert ran beneath an elevated section of the Long Island Railroad (LIRR), however the lack of overhead space created unique challenges. To accommodate this interference, NRC proposed jacking the precast concrete culvert sections into place using a custom shield made by Tenbusch Inc. This eliminated the need to install the shoring and excavate immediately adjacent to the pile supported pier footing as well as eliminating the need to lift the box sections and lower them into position with only 11 ft, 5 in. of overhead clearance.

Another feature of the project was the microtunneled installation of 230 ft of 85-in. Hobas pipe in lieu of the contract specified open cut installation of 5-ft x 8-ft box culvert across Queens Boulevard during overnight hours. This substitution allowed seven of the eight lanes of traffic, two bike lanes, and three pedestrian medians to remain open during construction, thereby greatly benefitting the community and the traveling public.

Eric MacFarlane, P.E., NYC DDC’s Deputy Commissioner Infrastructure Division, had this to say about the project: “When complete, the new sewer will mitigate flooding conditions throughout the project area and will convey storm water runoff to nearby Bowery Bay. The complexity of installing a deep sewer using trenchless technology in a congested residential community was expertly performed by Northeast Remsco personnel.”