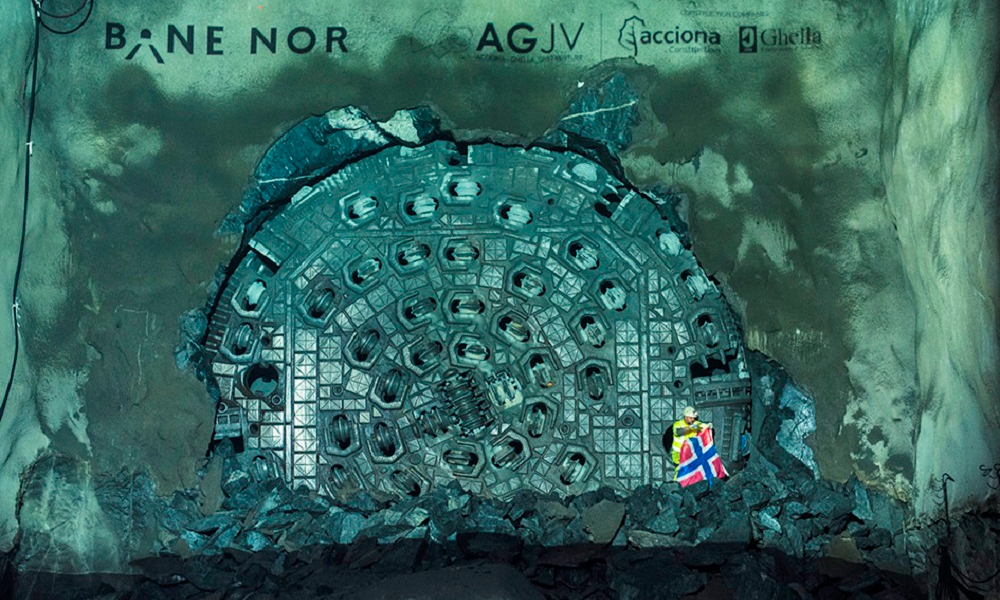 Tunnel people and guests are waiting for the first penetration of the tunnel drilling machines in the Folloban Project. (Photo: Nicolas Tourrenc.)

Shorter travel times and increased capacity for rail passengers on the Østfold Railway came a big step closer Sept. 11 when two major tunnel drilling machines had a breakthrough in Oslo. The Follo Line will provide a travel time by train in 11 minutes from Ski to Oslo. This is a halve of today’s travel time.

“The Follo track will be very important for growth and development throughout the Oslo region. It is an important part of InterCity development, which will provide an efficient transport system with increased capacity for both freight and passengers, “says Gorm Frimannslund CEO of Bane NOR, the Norway national rail agency.

In the National Transport Plan, it is assumed that it will invest up to NOK 270 billion (~$25 billion US) on the railroad until 2029. It has never before been allocated so much money to build railways in Norway.

“This is an important day for all travelers in the Oslo area. The Follo track will make everyday life easier with shorter travel time. It will affect where people choose to live and work,” said Minister of Transport Jon Georg Dale on the marking of tunnel transitions.

Bane NOR will invest in the market for the next three years with investments of NOK 60 billion (~$7 billion US). This will be used for InterCity projects in Eastern Norway and rail development in Bergen.

For two years, the two machines Queen Eufemia and Queen Ellisiv have drilled 9 km each, from Åland to Oslo. In spring 2019, the last two tunnel drilling machines, which drill south, will get through at Ski.  With the Sept. 11 penetration to the center of Oslo, two giant tunnel drilling machines (TBM) have completed the journey at the same time. It is the first time that two such tunnel drills have drilled closely after each other over such a long stretch and have been drilled at the same time.

The two machines came out of the mountain and into a mountain hall under Ekeberg. When the dust had subsided, tunnel workers came crawling through the head of the large machines, with flags and cheers.

Bane NOR chose this method for drilling most of the long tunnel (18.5 km of 20 km), and it is contractor Acciona Ghella Joint Venture (AGJV), which performs the assignment on behalf of Bane NOR. The drilling started Sept. 5, 2016, and the drilling in the north direction has been completed in less time than planned.

“We understood early that tunnel drilling machines could be a good choice. With this project we have documented that tunnel drilling, in addition to explosives and more conventional methods, is a good choice for the production of waterproof, long tunnels, also in hard rock, as we have here in the country,” says project manager for TBM, Anne Kathrine Kalager. “Two years ago, we started the first machine. When we reach two years later, impact not only marks one, but two machines, it feels like reaching a big milestone.”

The project director at AGJV is proud of what they have achieved so far with Bane NOR:

“We are proud of how AGJV, in cooperation with Bane NOR, has managed to handle this complex project. Together we continue to achieve goals, and through this cooperation over cultural grants we solve challenges together. The double penetration we experienced today, earlier than originally, was emotionally strong and amazing, “says Fernando Vara, Project Director, AGJV, who is also responsible for the corresponding tunnel work in progress.

Well ahead at Oslo City Center, the two tunnel drills will be disassembled and transported out of the mountain. Equipment for this is already ready. Immediately, work on rail technology also begins to make the watertight tunnel a completed railway system.

“The Follo track will provide a state-of-the-art infrastructure for this part of the Oslo region and further south to the towns we have on the eastern side of Oslofjorden and all the way to Sweden. It is designed for speeds of up to 250 km/h and has at least 100 years of life expectancy, “says Per David Borenstein, Project Director for Follobanen, Bane NOR.

– The 150-m long machines have a 9.96-m diameter and are specially made for extra hard rock. These are the most powerful tunnel drills ever produced, according to the manufacturer Herrenknecht in Germany.

– Two thirds of the large Folloban project has now been completed, and the Follo track will be completed in December 2021. Passengers can then take the train through the long tunnel on the journey between Oslo S and Ski – and the travel time will be halved. Others may choose to take a local train on Østfoldbanen, where there will be better capacity.