You are at:Home»News»Feds Clear the Way for VTA to Pursue Billions More in Funding for BART Silicon Valley Extension 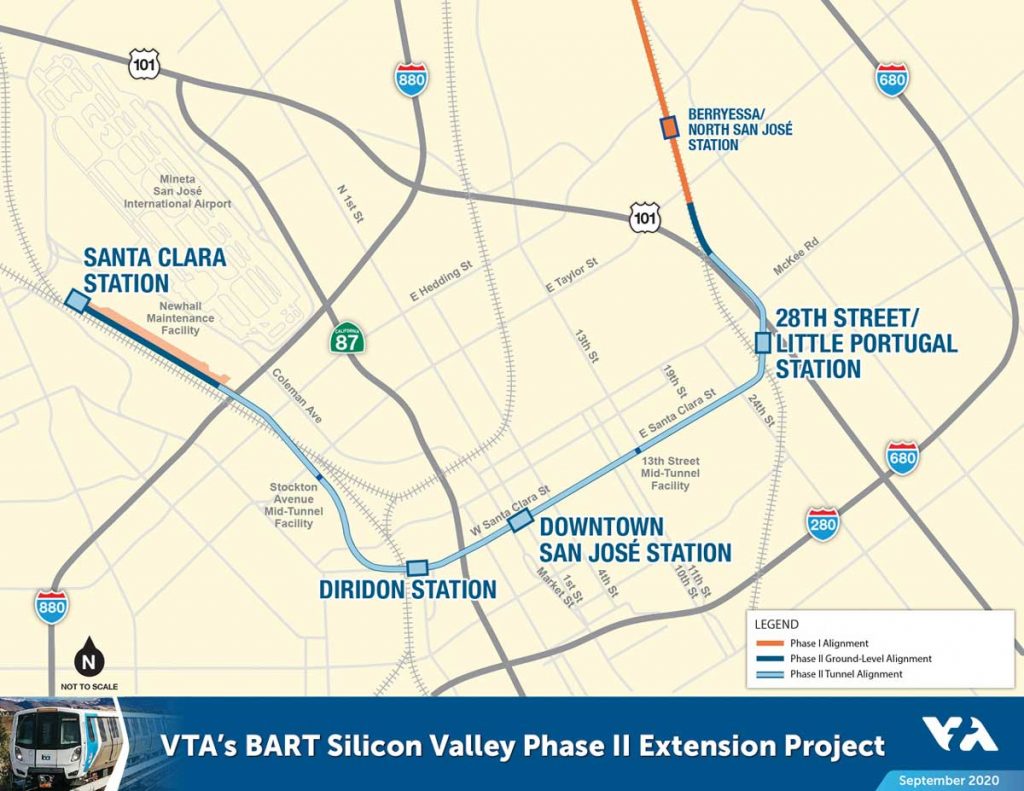 The Santa Clara Valley Transportation Authority (VTA) just received authority to pursue federal funding for up to 50% of the cost of Phase II of the BART Silicon Valley Extension Project. The funding could be as much as $4.6 billion, if needed, for the alignment that will extend the heavy rail service from Berryessa/North San Jose through Downtown San Jose into Santa Clara.

The Federal Transit Administration (FTA) notified VTA that the Phase II Project has been approved to re-enter the federal Capital Investment Grants New Starts Funding program. This approval allows VTA to apply for twice the amount of funding anticipated under the previous Expedited Project Delivery pilot program. The FTA’s action also approves past eligible expenses for potential grant reimbursement back to March 2016, as well as for all remaining work on the project, for the estimated total project cost of up to $9.3 billion.

With consideration of the FTA’s actions, VTA’s Board of Directors authorized the execution of contract amendments for up to $460 million at its Dec. 1 meeting, including the purchase of the tunnel boring machine and moving into early construction activities.

Kiewit Shea Traylor has the tunnel and trackwork contract for the project and plans to procure a tunnel boring machine, approximately 54 ft diameter, to bore a 5-mile tunnel under Downtown San Jose. VTA is embarking on the first rail project in the United States to be constructed by a single bore allowing both tracks and station platforms to be constructed within the tunnel, utilizing the newest technology in underground construction.

VTA plans to begin the federal funding application as soon as summer 2023, after a final cost estimate and funding plan is worked out. VTA is seeking an additional $750 million from the state’s transportation funding program for major transit projects as the last key funding piece.

The Phase II Extension includes 6 miles of track and four stations to be added to the Phase I 10-mile alignment from the Warm Springs/South Fremont Station, through Milpitas and Berryessa/North San Jose.