You are at:Home»News»FlexBor Unveiled in Pennsylvania 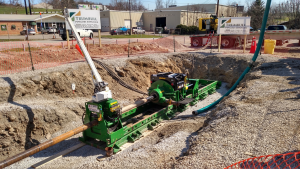 The new FlexBor system was recently unveiled during an open house at Trumbull Pipeline Services’ facility in Washington, Pennsylvania. More than 100 interested people showed up to see a demonstration installation using the FlexBor system.

The FlexBor system features an encased bore that virtually eliminates the threat of frac out and can be used in combination with horizontal directional drilling (HDD) or auger boring methods. The FlexBor system uses air flow to remove spoil, eliminating the need for slurry and reducing disposal costs. The pit launched system can reduce the entry angle associated with longer HDD crossings, thereby reducing the length of the bore.

Trumbull quickly seen the benefits of using this tool and has the desire to work with Barbco Inc. of East Canton, Ohio, to inject the method into their pipeline division. Trumbull used a Barbco Tribor in combination with the FlexBor tool during their open house. The Tribor combines guided boring (pilot tube), HDD and auger boring.

Based in the heart of Marcellus shale country, Trumbull naturally gravitated to pipeline work to complement its suite of bridge, highway and heavy civil services. It did not take long before Trumbull’s Pipeline Services group recognized some of the issues associated with drilled pipeline crossings – namely the threat of the inadvertent return of drilling fluid (frac out). 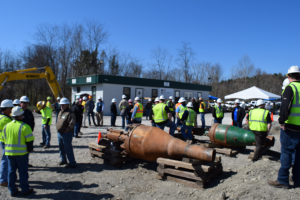 “We recognized the potential problem of frac out and the potential environmental consequences, so we naturally were interested in the FlexBor system,” said Tim O’Brien, President of Trumbull Energy Services. “This is an innovative solution that can help solve problems safely, efficiently and economically.”

The FlexBor system has been in development over the past several years, with product developer Derik Engle working with Barbco to refine and test the tool. Engle developed the system as a result of shortcomings he experienced trying to install pipelines with a mid-sized rig. “We were encountering problems with HDD because the radius needed to complete the project made it too long for the equipment,” Engle said. “So, I started digging launch pits to shorten the bores, then we started using different cutting tools and air pressure to remove the spoils.”

“With the challenging terrain and the environmental issues we have here in Pennsylvania, this system almost seemed too good to be true,” said Jack Holley, General Manager of Trumbull Pipeline Services. “You don’t often see real innovation in the pipeline industry, but this system is really remarkable.”