You are at:Home»News»International News»Geoconsult Aids in Building “Train to the Clouds” 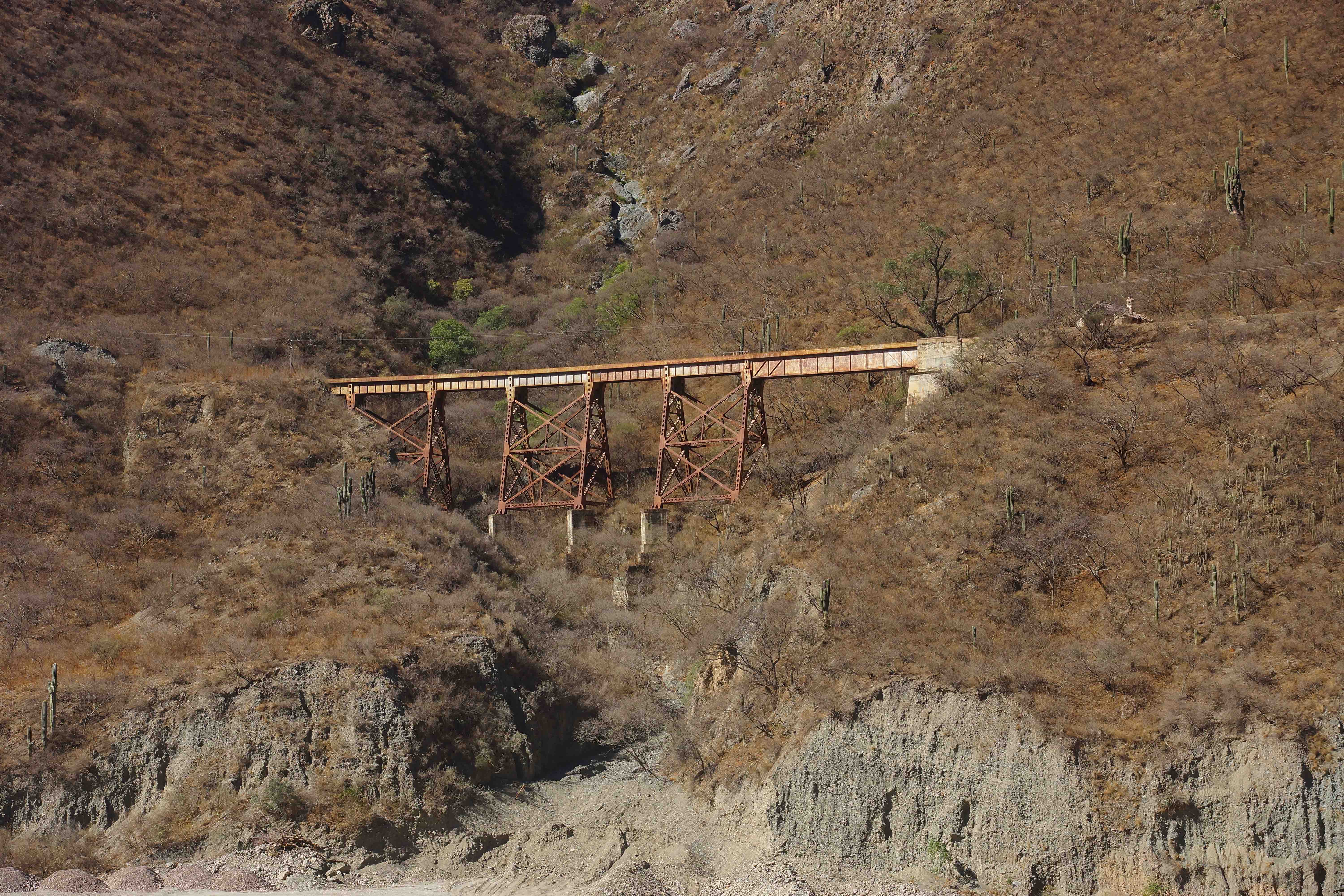 Operation of the 780-km (485-mile) long railway line over the Andes from Salta in Argentina to Antofagasta in Chile started 1949 after approximately 27 years of construction.

With the risk analysis, the specialist consultants provide a well-founded basis for future investments in Argentina’s rail infrastructure and an important contribution to the economic development and improvement of living conditions in the northwestern region of Argentina.

The special challenge consisted in assessing an area of approximately 10,000 sq km at high altitudes subject to extreme climatic conditions in a short period of time. A two-stage process has been developed. In the first stage, based on remote sensing data (satellite pictures) and local expert workshops, “hot spots” were identified and associated initial risk analysis performed.

In a second stage, these locations have been verified in situ and further explored by the use of drones. Based on data from the existing infrastructure, identified natural hazards as well as logistical requirements models for time tables have been developed, allowing an estimate of the annual total transport capacity.

The Austrian engineers are recognized worldwide as experts for the improvement and optimization of railways in all sorts of difficult terrain not only limited to Alpine regions. Therefore, the study has been supported financially by the Austrian Economic Service. The specialists from Geoconsult and Georesearch, from Wals and Salzburg, Austria, collaborated on a concise risk analysis for the project, which has been developed in short time using innovative methods.

Until now the assessment of risks and associated dangers of a linear infrastructure consisted in mapping the terrain on the ground walking kilometer by kilometer along its entire length in order to develop models for risk analysis. The assessment of the approximately 570-km (350-mile) long Argentine section from Salta to Socompa on the Chilean border on the railway line to Antofagasta on the Pacific Ocean in the northern region of Chile would have taken at least six months of fieldwork. By the application of modern methods such as the use of drones, the amount of fieldwork has been reduced to less than a month concurrent with an increased quality and distinctly lower costs for data collection. 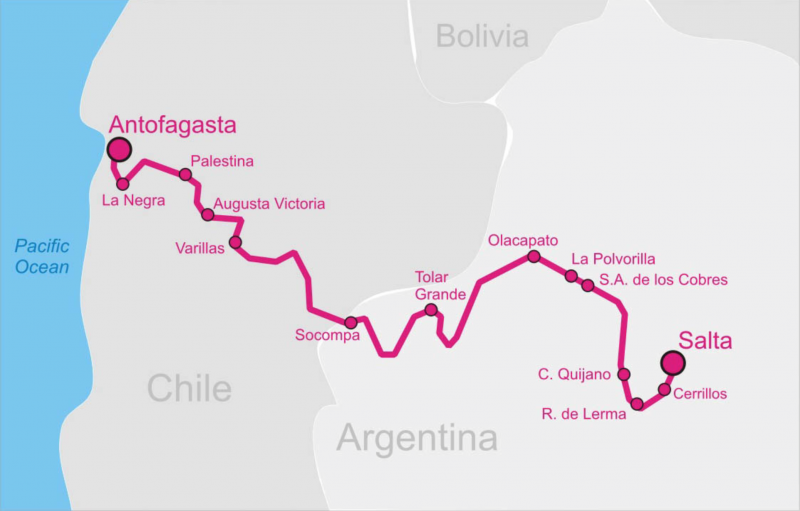 Train to the Clouds

The railway line from Salta (Argentina) to Antofagasta (Chile) began operation in 1949 after a construction period of 27 years. The railway line comprises 29 bridges, 21 tunnels, 13 viaducts, 2 switch back bends, 2 switch backs and 21 stations. It crosses several salt flats rises to an elevation of over 4,400 m (14,450 ft) and is in parts subject to extreme climatic conditions. The world famous tourist train “Tren a las Nubes” runs along a stretch of the line including the “Viaducto Polvorilla,” the highest viaduct in South America.

The extensive and exposed mountain ridges of the Andes represent major challenges for planning, construction, maintenance and operation of traffic infrastructure. Until now roads are the main transport routes between Argentina and Chile, which are however often in bad shape and can only be used part of the year due to the climatic conditions.

The study shows the potential along this transport corridor, which is the only railway line between Argentina and Chile still in operation. This is of major importance especially considering it against the background of existing natural resources.

Integral interdisciplinary methods have been used in order to analyze natural hazards along the entire line based on satellite data and simultaneously assessing potential availabilities of service based on the technical condition of the railway line. By establishing step by step options for improvement and tailor-made concepts for logistics and cargo handling, it was possible to derive yearly transport capacities conclusively.

Because of the extreme topographic location, the extensive analysis of natural hazards and risks is an important basis for decision-making for the railway operator in order to perform adequate maintenance measures in the future. A particular challenge for the Austrian specialists has been the extension of the area to be investigated of over 10,000 sq km, the poor quality of available data and the very short period of time of less than six months to carry out the work.

The economic and geographic external conditions of the region have been assessed with the conclusion that an enormous potential of goods favorable for rail transport faces a very small actual share of railway transport mostly due to structural reasons. Logistics are highly ineffective because of missing logistic hubs, non-coordinated cycles of loading, a poor transport infrastructure missing multimodal connections and inadequate warehousing. Consequences are uncertainties in the reliability of transport additional costs and limitations of production capacities, reasons which influence the economic development of a region unfavorably.

The experts of Geoconsult and Georesearch with their partners STL-Solutions for Transport & Logistics and Planum (both from Graz, Austria) recommend a step-by-step improvement of the existing railway line as well as the arrangement of multimodal hubs for goods in order to stabilize the region’s economy.

The investigation of the entire railway line has shown that the railway infrastructure, which initially has been designed for heavy traffic, is safe for operation. For an increase of current capacities, a number of construction measures have been recommended. 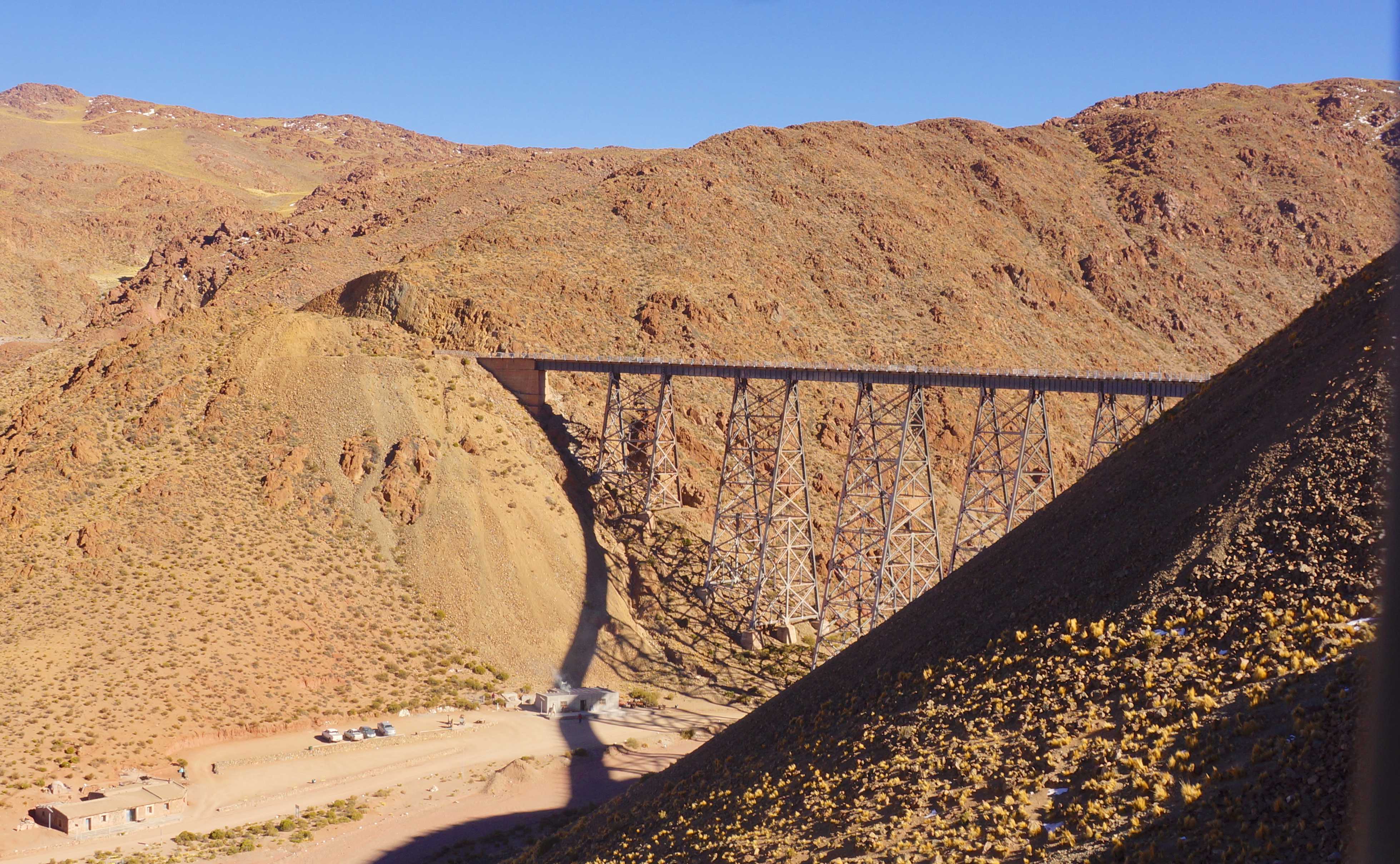 The Viaducto Polvorilla, a 223-m long steel framework construction, is the highest viaduct in South America at 63 m.

Risk Reduction for the Railway

In order to assess the natural hazards and risks, a two-stage analytical method has been followed by the experts. On the basis of satellite data and a first field trip with interviews of experts in the field, 94 risk areas have been identified and categorized by type of risk, intensity, frequency and consequence and the resulting risks analysed. The areas have been overflown in detail by drones collecting new field data. The risk analysis has been updated with the new detailed data. Approximately 25% of all risks have been assessed as high. Suitable technical and organizational measures have been proposed for risk mitigation. The feasibility study was presented at the end of January 2018 in the Austrian foreign trade center in Buenos Aires to a delegation of members of the Argentine ministries for mining and infrastructure as well as the Argentine railways.