You are at:Home»News»International News»German Minister of Economic Affairs and Energy Visits Herrenknecht Factory 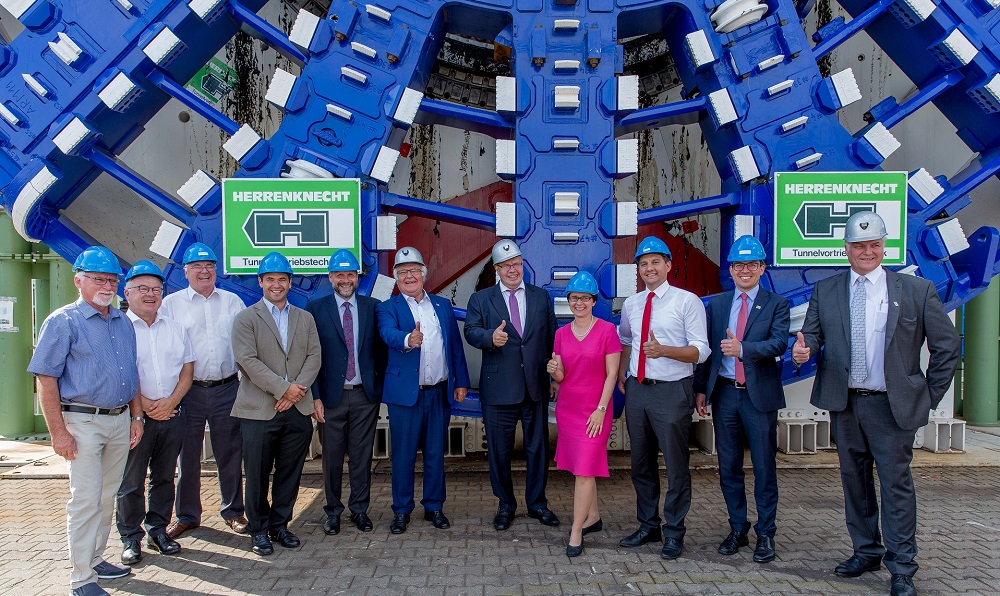 In addition to the Board of Management of Herrenknecht AG, Wolfgang Brucker (Mayor of Schwanau, 5th from right), Dr. Johannes Fechner (member of the Bundestag, SPD, 3rd from left) and Marion Gentges (member of parliament, CDU) were present. In Virginia, USA, the EPB Shield in the background will create an almost two kilometer long highway tunnel under Chesapeake Bay.

On Tuesday, Sept. 4, 2018, Federal Minister of Economic Affairs and Energy Peter Altmaier visited Herrenknecht AG in Schwanau and learned about the company, the international project world and individual tunnel boring machines (TBMs) under construction. Challenges in the global market of the tunneling industry were also discussed. During the subsequent company tour, Chairman of the Board of Management Dr.-Ing. E.h. Martin Herrenknecht introduced the innovative EPower-Pipe method, which allows cable protection pipes to be securely and quickly installed for the subsequent installation of high-voltage power lines.

With E-Power-Pipe, Herrenknecht has developed a new method to quickly and securely install small-diameter cable protection pipes underground with drive lengths of over a kilometer – previously there was no technical solution for this combination of requirements. The trenchless technology can be precisely controlled and used with only small overburdens. It thus offers a ground-conserving alternative to the conventional open-cut method for high-voltage grid expansion. This reduces subsequent renaturation measures along the route of the underground power line and can thus contribute to greater acceptance by the population.

In the spring 2017, together with Amprion GmbH, a leading transmission grid operator in Europe, and RWTH Aachen, Herrenknecht demonstrated the performance of E-Power-Pipe with a successful pilot project in Borken (North Rhine-Westphalia). The development of the method was funded by the Federal Ministry of Economic Affairs and Energy (BMWi research project IBoTec) and carried out by Herrenknecht in cooperation with Amprion GmbH and RWTH Aachen.

For Information on Herrenknecht and Its Equipment, Read This Profile in Trenchless Technology

The family business from Schwanau benefits from the experience of more than 4,100 projects worldwide. In addition to reference projects for supply and disposal lines of all kinds (Utility Tunneling), this includes challenging tunnel projects in Europe, such as the Follo Line railway tunnel, where four high-speed tunnel boring machines are working their way through the hardest Norwegian gneiss.

Herrenknecht TBMs are also involved in the infrastructure expansion of the French capital, the Grand Paris
Express, which will create more than 200 kilometers of new metro lines. The Brenner Base Tunnel is currently under construction to develop the world’s longest underground railway connection. Herrenknecht TBMs are also underway in major tunneling projects in Australia, the United States and China.

Peter Altmaier said during his visit: “Around the world, Herrenknecht AG’s technical achievements are impressive. Time and again, the company manages to push the boundaries of what is feasible in tunneling and also to develop innovative solutions in related business areas. As Federal Minister of Economic Affairs, I am committed to ensuring that in our country such successes remain possible in the future too.”

Herrenknecht’s know-how is in particular demand for projects with very sophisticated technological requirements. “Given the current isolationist tendencies of many countries and political uncertainties, the global situation is becoming increasingly complex. In China, for example, we have to compete with state-sponsored players in the industry,” explains Dr.-Ing. E.h. Martin Herrenknecht with regard to the challenging market situation. “Thanks to our comprehensive technology and service portfolio and global presence, however, we are also well prepared for the future.”