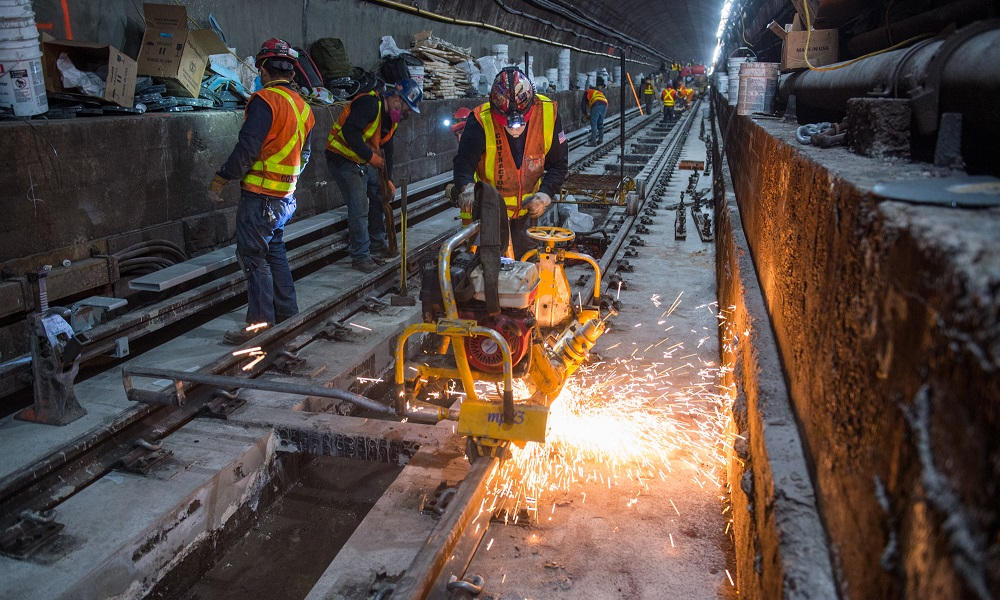 New York Gov. Andrew M. Cuomo on April 26 announced that the nation-leading, innovative L tunnel project is complete – six months earlier than the original proposal that would have shut down service, and three months ahead of the new innovative plan announced in January 2019, after the Governor convened a panel of engineering experts who determined a disruptive total shutdown was unnecessary. Completion came through under budget, saving more than $100 million in project costs. Beginning Monday, April 27, L train service resumed its previous service schedules with adjustments under the MTA Essential Service Plan.

In January 2019, with a full L shutdown looming to repair damage from Superstorm Sandy, Cuomo convened academic leaders – including the deans of the Cornell University and Columbia University engineering schools – to review the two L tubes and determine if the rehabilitation work could be completed in a more efficient manner. Following their review, the academic team recommended new construction methods and technology that have been used in transit systems around the world and several industries, yet never before integrated in a similar project in the United States. Once rehabilitation work began in April, these techniques allowed New York City Transit to continue to run subway service in the tunnel throughout construction so that regular weekday commutes for the bulk of L customers between Manhattan and Brooklyn were not disrupted. Prior to those recommendations, NYC Transit had planned to close the entire L train tunnel to demolish and reconstruct the tunnel’s infrastructure.

The completion of the tunnel rehabilitation project, which began in the wake of Superstorm Sandy, comes amidst the unprecedented challenges of the COVID-19 global health pandemic. To ensure the project remained on schedule for completion, MTA Construction & Development implemented a number of aggressive health and safety protections for employees and contractors, including launching a new daily reporting app, mandatory use of personal protective equipment, around-the-clock disinfection of contact surfaces, a ban on sharing of tools and closure of common facilities, among other steps.

“While New Yorkers continue to cope with the devastating impact of COVID-19, the L train project completion is timely proof that when we are confronted with a challenge we can build back better and stronger – especially when we work together and think outside the box,” Cuomo said. “Everyone said we had to shut down the tunnel for 15 to 18 months, which was going to be a massive disruption for thousands of New Yorkers who rely on the L train. We challenged those who said there was no alternative solution and as a result today the MTA is delivering a more resilient tunnel with improved service that is ahead of schedule and under budget – all while averting a shutdown.”

The new construction methods used in the L project preserved service for 90 percent of the line’s 400,000 total average weekday customers for the majority of the 12-month project with no shutdown. The revised approach to the tunnel rehabilitation resulted in a more resilient infrastructure in the L tunnel, specifically:

– Maintaining Service: By using the structural fiber reinforced polymer (FRP) panels to encase damaged portions of the oldbenchwall, the L tunnel was kept operational throughout the project so that service could be maintained – especially during the critical weekday A.M. and P.M. rush periods. This minimized customer disruption.
– Future adaptability: Many elements of transit infrastructure are physically locked-in, and can’t be adapted for future growth and changes in technology. By contrast, the new cable racking system means that cables can easily be added and/or upgraded with the latest technology as needed.
– Dynamic longevity: Using the new fiber optic monitoring system, the structure of the L tunnel, especially the benchwall, is now constantly scrutinized and any necessary preventative measures can be proactively taken. This means adjustments can be made based on the constant and real-time data reporting of movement and temperature changes instead of waiting until significant issues arise.

The completion of the L Project’s tunnel rehabilitation work means that, starting Monday, April 27, L train service resumed on both tracks during the overnights and weekends. The alternative service options, including the M, G, 7, will resume their previous routes and schedules. Using the revised approach to the tunnel rehabilitation, the completed L tunnel results include: