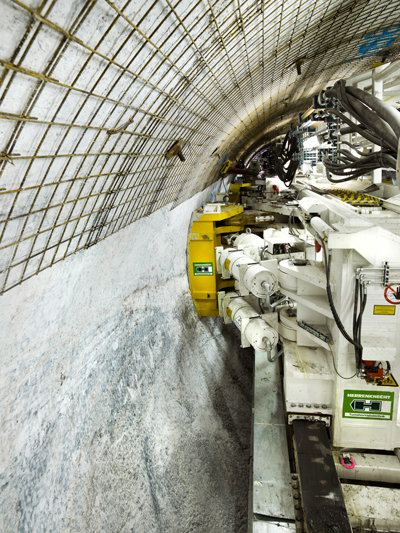 The immense gradient called for an extremely reliable safety concept to hold the machine securely in place during tunneling.

Equipped with a new safety concept for securing the machine, the Gripper TBM was able to cope with the 40 degree gradient of the two tunnels without incident.

A Herrenknecht Gripper TBM (5.2 m OD) bored two 1,030-m long headrace tunnels through hard rock, connecting the upper reservoir to the machine hall cavern. With the breakthrough of the second tunnel on March 13, 2013, another key milestone in the major project Linthal 2015 was reached. Linthal is expected to commence operations in 2015 as the currently largest hydroelectric power project in Switzerland. In cooperation with the construction company, Swiss firm Marti Tunnelbau AG, the engineers from Herrenknecht AG developed a solution for safe tunneling at a gradient of 40 degrees.

The machine drove two 1,030-m long headrace tunnels from the underground cavern for the pump turbines (1,700 m above sea level) up to the 600 m higher service chamber on the shores of the Muttsee Lake. The tunnel route runs predominantly through Quintner limestone at depths of up to 565 m. The Gripper TBM had to cut through rock strengths of up to 120 MPa. A route gradient of 40 degrees (equivalent to 84.7 percent) was a special challenge for the machine technology, the workers on site and the planning team. In both tunnels the specialists from Marti Tunnelbau AG had to pass through the Mörtalbruch fault zone. Complex supporting and rock stabilization measures slowed the advance but assured the final success of the project.

The immense gradient called for an extremely reliable safety concept to hold the machine securely in place during tunneling. At all costs it had to be ensured that the TBM could not slip back when the grippers were moved. For the project, Marti Tunnelbau and Herrenknecht developed a double anti-reverse lock with full back-up redundancy of the available bracing levels for the 130-m long and 800 tonne TBM. This significantly increased safety for man, machine and structure: in all operating states (advance, standstill or regripping) there were always at least two of three locking systems independently braced against the mountain. The anti-reversing locking systems worked mechanically on the basis of a self-locking toggle lever (automatic mechanical wedging). This meant that even in the case of a failure in the energy supply and the hydraulic systems the necessary bracing of the machine against the mountain was assured.

In November 2010 the Herrenknecht Gripper TBM began driving the first tunnel and completed it in October 2011 after best performances of up to 130 m per week. Then the TBM cutterhead was disassembled and the back-up pulled back through the pressure shaft and made ready to go again. From February 2012 the TBM bored its way through the second tube and was still able to achieve a weekly best performance of 133 m at the end of the tunnel in mid-March 2013.

The Muttsee, Tierfehd and Linthal (Canton of Glarus, Eastern Switzerland) hydroelectric power plants of Kraftwerke Linth-Limmern AG currently generate a total of 480 mW of clean energy. As part of the Linthal 2015 project, the new Limmern pumped-storage plant will raise the capacity by 1,000 mW. Construction of the new power station is being carried out by the consortium ARGE Kraftwerk Limmern under the leadership of contractor Marti Tunnelbau AG.