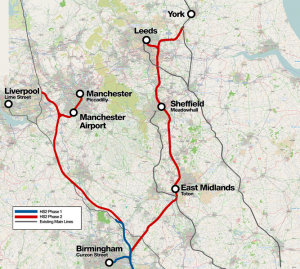 Construction will now begin on schedule in the spring, including the launch of schemes totaling £70 million for communities along the route between Birmingham and London.

Transport Secretary Chris Grayling said: “Getting the go-ahead to start building HS2 is a massive boost to the UK’s future economic prosperity and a further clear signal that Britain is open for business. HS2 will be the world’s most advanced passenger railway and the backbone of our rail network. Royal Assent is a major step towards significantly increasing capacity on our congested railways for both passengers and freight; improving connections between the biggest cities and regions; generating jobs, skills and economic growth and helping build an economy that works for all.”

From 2026 tens of thousands of passengers will be using high speed trains every day between London and Birmingham; services will travel onwards to places like Manchester, Glasgow, Liverpool, Preston and Wigan. From 2033, the high speed network will go into the centers of Manchester and Leeds and services will go onward to places such as Darlington, Newcastle and Edinburgh.