You are at:Home»Editor's Message»Improving the Image of the Tunneling Industry

It seems like the tunneling industry gets a bad rap in the mainstream media. Tunnel projects are often characterized as being more expensive than surface options (true, at least when discussing construction cost vs. lifetime cost and not considering social costs) while also being susceptible to cost and schedule overruns (also true, but certainly not unique to large-scale construction projects).

The specter of cost overruns was a key reason New Jersey Gov. Chris Christie canceled the Access to the Region’s Core (ARC) project in 2010. The heart of the ARC project is building new tunnels under the Hudson to provide added capacity and redundancy for train service between New Jersey and New York. While the planned Gateway project that is moving forward will help accomplish those goals when completed around 2026, that is of little solace to New York area residents who are suffering through what is dubbed as the “Summer of Hell” due to an overwhelmed transit system.

With the demand for tunnels high, it is imperative that the industry does what it can to improve its public image as well as strive to keep projects within budget and on schedule. This, of course, has been recognized and many talented individuals have been working on solutions over the past years, perhaps decades.

In this issue, we highlight some of those initiatives. In the article “Risk-Based Integrated Cost and Schedule Analysis for Infrastructure Projects” by Philip Sander, Martin Entacher, John Reilly and Jim Brady, the authors discuss a software tool that can be used in the planning and design phases to help establish a realistic budget for complex tunneling projects, as well as aid in budget control with integrated risk/change order management during project construction.

In “Risk Management in Tunneling from the TBM Manufacturer’s Perspective,” authors Lok Home and Desiree Willis of The Robbins Company discuss how utilizing the latest in tunnel boring machine technology can help mitigate risk during construction. The authors write that advances in hybrid technology allow for traversing a range of ground conditions by switching from EPB to hard-rock mode, while rock TBMs can be equipped with drills for probing and grouting to help identify and address potential difficult ground. 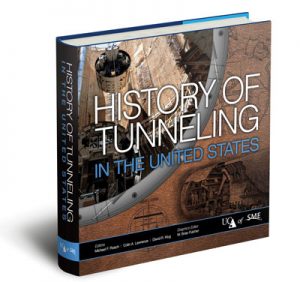 Finally, on the PR side, the UCA of SME has published a new book titled “The History of Tunneling in the United States.” The book was edited by Dave Klug, Colin Lawrence and Mike Roach with Brian Fulcher as the graphics editor. It is reminiscent of a coffee table book with stunning images recognizing all eras of tunneling in the country.

“We have an amazing history of projects that have been built involving innovative engineering and construction techniques, but yet a majority of people who rely on the infrastructure we build have no idea of the magnitude of the infrastructure or the effort it took to get it built. As an industry, we have done a great job in getting things built, but we have not done a good job in showcasing our work. In compiling this book, we set out with the goal to highlight what we do,” Klug said.

The book is available for purchase through the SME website.