You are at:Home»News»In Memoriam: Stephen Taylor 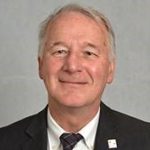 Stephen Taylor, Senior Vice President at Mott MacDonald’s Boston office, passed away peacefully after a brief and unexpected illness on Jan. 12, 2019, surrounded by his wife Marijke, his daughters Jennifer, Stephanie, and Katie, his son Antony, and his grandson Nate.

Steve met Marijke when she was 15 and fell instantly in love. They married on November 13, 1976. Steve and Marijke emigrated to South Africa shortly thereafter, and Steve worked in the gold mines near Johannesburg. They then took time off and traveled the world, returning to England just before Jennifer was born.

Steve’s career demonstrated his versatility and included employment with consultants and contractors across the globe. He worked on several signature projects, including the preliminary design of the Queen Elizabeth II Bridge over the Thames.

Steve joined Mott MacDonald in 1993 to work on the design of the Central Artery project known as the “Big Dig,” including a series of world-record-setting jacked boxes that were orders of magnitude larger than anything ever attempted before. One of these required the largest man-made block of frozen ground ever created. He moved to the United States in 1995 to complete the Central Artery design and provide specialist advice during construction.

In 2005, he was awarded a CBE (Commander of the British Empire), one of the highest orders of chivalry awarded by Her Majesty the Queen. Steve said, “I am thrilled to be honored with this award and feel that there are so many people that have made it possible. I share this award with my family, especially my wife, and with the many, many engineers and others who have helped, educated and inspired me over the years.”

Not only was Steve an incredibly gifted engineer, he was a very caring person who supported everyone and anyone he came in contact with. His kindness knew no bounds. If you were fortunate enough to know him, he brought a smile to your face every time you interacted with him. He mentored dozens and dozens of people both inside and outside the company, making them better engineers and better people. Steve would always take the time, especially during holidays, to remind us how fortunate and blessed we are to work for such a great company with so many wonderful colleagues.

Steve is a past chair of ACEC/MA’s Engineering Excellence Awards and enthusiastically helped with the program’s success for many years. The Awards Committee so appreciated his leadership that they gave him the title Chair Emeritus after he completed his chairmanship. He was also very active on the BSCES Structural Group.