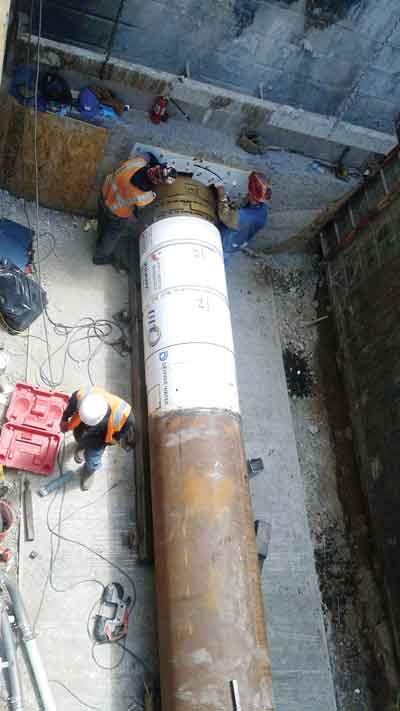 The 36-in. MTBM was launched July 20 to undercrosss Union Pacific Railroad tracks near Union Station.

Thirty years ago, the Iseki name was closely linked to Microtunneling in the United States. In fact, the Japanese equipment manufacturer was the first entrant in the North American market, establishing a U.S. branch in 1984. Soon after, manufacturers Herrenknecht, Soltau and Akkerman entered the emerging market.

In the early 2000s, Iseki unfortunately withdrew from the U.S. market after suffering losses stemming from projects in South America and the Caribbean that were managed from the U.S. office. In a similar timeframe, Soltau was purchased and began to fizzle out of the market, leaving two main manufacturers operating on the continent.

However, that began to change in 2007 when a job in New York City left contractor E.E. Cruz looking for alternatives. “We had a very tight bid and we were looking at options to procure rental equipment, but none of the contractors in the United States had anything that met our needs,” said Todd Kilduff, of Kilduff Underground Engineering, who was running the project for E.E. Cruz at that time. “So we reached out ‘over the pond,’ this led us to Iseki’s U.K.-based distributor (Iseki Microtunnelling), which operates an extensive ‘hire fleet’ on a worldwide basis. Iseki Microtunnelling was able to provide a quote that allowed us to move forward with the project.”

The job, for the New York City Department of Environmental Protection, involved eight drives totaling more than 2,200 lf of small diameter pipeline. E.E. Cruz ran the job around the clock for three months to successfully complete the project, with Iseki Microtunnelling’s staff providing technical backup and expertise. “They came in and acted basically as a subcontractor and provided an engineered solution to complete the job,” Kilduff said. “Iseki Microtunnelling essentially gave us the only opportunity we had to complete the job at that time – and I always had that in the back of my mind.”

Flash forward to today, and Kilduff is operating his own consulting firm – Kilduff Underground Engineering – which includes pre-bid consulting for tunneling and microtunneling contractors, leading again to Kilduff reaching out to Iseki Microtunnelling for quotes on projects in the United States. The relationship between the companies re-emerged, resulting in Kilduff Underground Engineering now serving as the official representative for Iseki Microtunnelling in the United States, Canada and the Caribbean.

“I see a lot of opportunity between the two businesses and it also allows Iseki Microtunnelling to grow the market in a controlled manner here in the United States,” Kilduff said.

With over 30 machines in service, Iseki Microtunnelling will be offering rentals for complete MTBM systems with diameters ranging from 10 in. up to 98 in.

Iseki Microtunnelling has offered rental services for over 30 years. With worldwide experience acquired in 27 countries and working with over 100 contractors, Iseki Microtunnelling is well versed in the capabilities of the equipment they bring to the market and can back up its mission statement of “providing a complete engineered solution for underground utility installations.”

Like most good ideas, the development of the Iseki product range arose from the identification of a need. In the 1970s, sewerage networks in Japanese towns and cities were few and far between. The need, therefore, was to install sewerage infrastructures while minimizing disruption to daily life in one of the world’s most densely populated countries. To meet this end, trenchless solutions were sought for installation of the networks.

Yoshihito Kurose, founder of Iseki Poly-Tech Inc., decided to study solutions to the unique problems of installing sewage infrastructure in the crowded Japanese urban configurations. He identified that the equipment to be designed should have the widest range of application and it had to be able to cope with wide-ranging soil conditions. He chose a slurry system as the basis point of development for this reason.

Iseki was established in 1971 and the following year it introduced its first slurry shield – the MEPCB, a “manually” operated earth pressure counter-balance shield with a sophisticated automatic counterbalance head, capable of coping with highly unstable and sensitive water logged ground.

While Iseki continued to develop its product line, it branched out overseas, opening its European branch in 1981 and its U.S. branch in 1984. The same year the U.S. office was founded, Iseki introduced the radical Unclemole TCC (Tele Cone Crusher). The Unclemole TCC features a single cutterhead that is capable of dealing with all soft ground conditions (clays, silts, sands, gravels) along with boulders up to 30% of the machine size and soft rock. This model – along with its variants (TCZ, TCZ-M, Pipe-replacer, TCP and TCL) – is recognized as one of the world’s most successful slurry MTBMs. 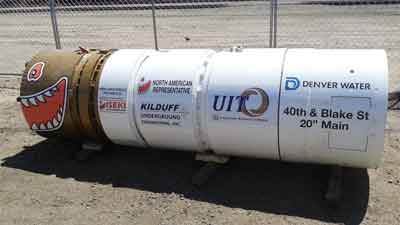 The Iseki Unclemole used for the 410-ft crossing for Denver Water.

In 2012, Iseki Microtunnelling was involved in one of the most technically challenging projects ever completed. The job involved the construction off a 980-m long, 1.8-m diameter outfall tunnel with a 600-m vertical radius curve and an underwater retrieval in the English Channel.

Iseki Microtunnelling/Kilduff Underground Engineering recently began their first “new era” venture in the United States. The project is taking place in Denver with Underground Infrastructure Technologies (UIT), which to date had primarily been involved with the tunneling and auger boring markets.

The project, for Denver Water, comprises installation of a 36-in steel casing over 400 lf undercrossing Union Pacific Railroad tracks near Union Station. The microtunneled drive passes underneath multiple tracks in a busy area.

Of three excavation methods pre-approved by Denver Water in the bidding process, UIT elected to use microtunneling because of the difficult soils that included fine and coarse alluvium and the potential for boulders up to 12 in., said Jeff Rumer, president of UIT. Additionally, one soils report indicated the presence of groundwater in the alignment.

In working on an RFP evaluation for the bidding, Kilduff suggested that Iseki microtunneling equipment might be a good fit for this project. “The Iseki Unclemole has an armored and oscillating head that can handle boulders up to 12 inches, and the machines have demonstrated their success on other projects,” Rumer said. “In the end, we thought that the Iseki was right tool for the job and set us up for success.”

The MTBM was launched on July 20 and completed the 410-ft drive on August 4 within 1/8th of an inch of the bull’s eye.

Rumer said that the re-emergence of Iseki in the United States is good for the micortunneling community. “The more choices and the more tools we have available, the better equipped we are to handle the challenges we face,” he said.

Kilduff is excited about the prospects of Iseki going forward. “Things are beginning to ramp up now and we are generating a lot of interest,” Kilduff said. “I believe that we can be extremely competitive in the U.S. market because of the extensive rental fleet that Iseki Microtunnelling has at its disposal and the exceptional engineering service that we jointly provide.”