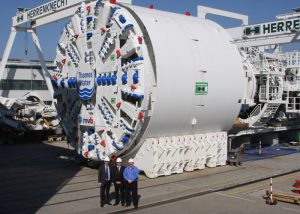 TBM ‘Busy Lizzie’ was used to dig the 4-mile Lee Tunnel beneath Newham in east London.

The Institution of Civil Engineers (ICE) recently awarded the Thames Water Lee Tunnel its Greatest Contribution to London Award, one of London’s highest engineering awards for raising the bar on innovation, health and safety, community benefit, construction and design. This is the second time the project has received this distinction, also earning ICE’s Greatest Contribution Award in 2012.

Part of the £5 billion ($6.6 billion US) London Thames Tideway Tunnel program, the 6.9-km long, 7.2-m ID, deep sewer tunnel has driven major industry leading innovations in design and construction. The Flow Transfer System, which also received the award, was developed from a rising main to an above-ground gravity system, simplifying the construction and eliminating the need for additional pumping.

CH2M has been serving as program manager of this historic public works initiative since 2008. The London Thames Tideway Tunnel program, which involves building not only the Lee Tunnel, but also the 32-km long Thames Tideway Tunnel, will reduce the city’s sewage overflows and enable the United Kingdom to meet European environmental standards, while ensuring a cleaner, healthier River Thames.

“The impact of this innovative project is truly remarkable, as it will transform London’s sewerage network to serve the historic city and provide best value for Thames Water’s customers for many years to come,” said Peter Nicol, CH2M Global Water Business Group President. “We are proud to be collaborating with Thames Water to execute a solution that will protect London’s community and ensure its sustainable water future.”

The deepest tunnel ever built in the British capital, the Lee Tunnel is the first phase of the biggest upgrade to London’s sewerage system since Victorian times and is a key part of Thames Water’s bid to clean up the iconic River Thames. The 4-mile tunnel running beneath the London Borough of Newham, from Abbey Mills Pumping Station to Beckton Sewage Treatment Works, reduces sewage discharges to the River Thames by 40%, and is the first of two tunnels needed to tackle the 39 million cubic meters of untreated sewage discharged to the River Thames in a typical year from London’s overstretched Victorian sewers, which fill to capacity after rainfall.