You are at:Home»Featured Stories»Load Cell Monitoring in a Tunnel Jacking Operation 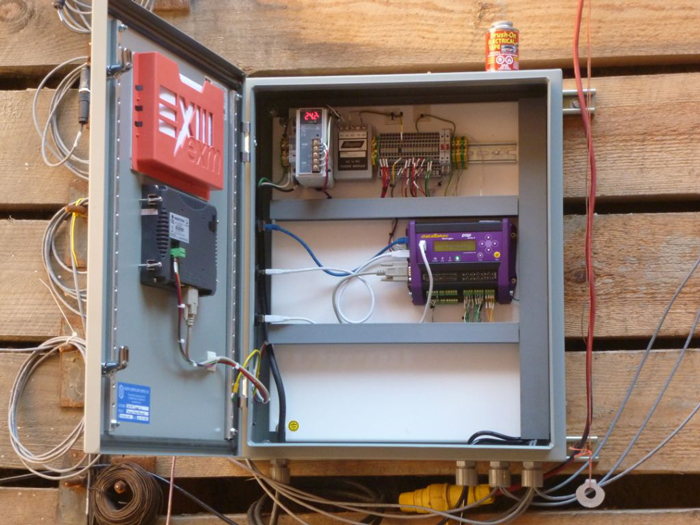 Flexible dataTaker DT80 Logs It All for Real-Time Machine Monitoring

CAS DataLoggers recently provided the datalogging solution for Custom Systems & Controls Inc. (CSC) in Framingham, Mass., specializing in system design, process control and automation. CSC was contracted by SECAC Tunneling of Baltimore, Md., to design and build a flexible monitoring system for its project to excavate a tunnel in Quincy, Mass.

The project to replace the existing and aging Town Brook Culvert, which formed a part of the ongoing revitalization of Quincy Center, required tunneling underneath Hancock Street, a busy street in one of the main business districts, where digging a trench would be impractical. As a result, CSC used hydraulic rams to jack rectangular, precast concrete tunnel sections under the roadway in a method known as tunnel jacking. Since excavation takes place from within the tunnel, this causes minimal impact on the surrounding utility infrastructure and surface traffic.

During the tunneling, it was necessary to monitor the tunneling equipment by logging tensions (force) from six load cells, hydraulic pressure, and movement of the support of excavation structure to thoroughly document the effectiveness of this innovative process. Workers also needed to view real-time operational data during tunneling operations and have the capability to conveniently transfer all data to a PC via a USB flash drive for analysis.

CSC installed a dataTaker DT80 Intelligent Data Logger in a control cabinet located on a soldier pile at the bottom of the tunnel jacking shaft. The dataTaker featured five channels, configured for two differential inputs each, for a total of 10 available channels. The logger was then connected to six load cells, a hydraulic pressure sensor, two tiltmeters, and an external 12-volt excitation reference power supply. The control cabinet was also connected to a Maple Displays 7-in. Touchscreen HMI for real-time viewing of all the values and for user download of logged data. The control cabinet was also equipped with external Ethernet, USB flash drive and USB programming ports with dust covers to protect the system from dirt and debris.

The tunnel measured approximately 10 ft high x 12 ft wide and was gradually excavated by the use of a boom-mounted, transverse cutting head called a “roadheader.” Spoils were removed by use of a tunnel digging machine and muck cars.  As the excavation progressed, the concrete tunnel sections were periodically advanced forward by four hydraulic cylinders capable of exerting up to 800 tons of jacking force. After the jacking cylinders were fully extended, workers retracted them and added the next tunnel section. A total of 18 tunnel sections, each 8 ft long, were required to complete the tunnel length of approximately 140 ft.  Though the amount of friction generated by the surrounding soil helped determine how much jacking force was required, it was critical to log and view the hydraulic pressure to avoid damaging the tunnel segments. In this way, the logged data was available to prove that operators stayed within the window of safe jacking force during operations in case they needed to prove best practices afterward.

The dataTaker recorded several values during the machine’s operation: The six load cells at the top and bottom of the tunnel could vary from 0 to 20,000 lbs of tension using a bridge output, while another sensor measured hydraulic pressure on the jacks with a range of 0 to 10,000 PSI using a 4-20mA output. Additionally, the bottom of the 30-ft tunnel shaft, which was constructed using steel soldier piles and wood lagging, had a reaction block constructed at its base from concrete and structural steel.  As the rams pushed against the block to generate its jacking force, two tiltmeters mounted on a nearby soldier pile logged any movement in the back wall of the shaft. The tiltmeters used a voltage output and measured the precise tilt angle with a range of about +/- ½ a degree.  Workers monitored all of the above data to help evaluate the excavation process, considering factors such as soil density, jacking force and more.

Operators needed to keep the jacking forces within the allowable limits during tunneling, so greased antifriction belts, which are integral to this innovative process, were used to give the tunnel a lubricated surface to glide on.  As tunneling progressed, the belts were exposed to tension as they were partially dragged along with the tunnel section while it was being advanced. The dataTaker was used to log the tension on a total of six of the belts, three on top and three on the bottom of the tunnel, in order to prevent over-tensioning. Normally the belts were exposed to low tension levels averaging 300-500 lbs. However, if the tension recorded by the dataTaker became higher, in the range of 2,000-2,500 lbs, this showed that the belt was being pinched and dragged.  Users relied on the DT80 to monitor the load cells, as formerly they had no indication of the building tension until a belt became damaged or failed.  The belts looped inside the top of the tunnel, hanging from the ceiling to keep them from interfering with tunneling operations.  As the tunneling progressed, more of the belt was pulled off the spools which were mounted outside of the tunnel.

Data collection was a simple matter using the USB drive.  Connecting to a PC was rarely done as bringing one down into the tunnel shaft was impractical.  The DT80 was also capable of Ethernet and remote data transfer in case more advanced communications options were required. Using the HMI, workers were able to copy the logged data onto a flash drive.  CSC Project Manager Vin Calio explained, “Storing the data on a flash drive makes it easy to retrieve it all at the end of each day.”  Workers were also able to select between day or night (standby) mode to control sampling speed.  During the day, the system logged at 1 sample a second on all channels, while in night/standby mode it only logged once every 10-15 minutes to preserve memory during times when no jacking was taking place.  Collecting the data was easy–users simply plugged in the flash drive and used the Maple display to start data collection—all without needing a PC.

The dataTaker intelligent data logger formed an essential part of Custom Systems’ integrated solution, measuring bridge, 4-20mA, and voltage signals simultaneously without requiring any modules or accessories.  Calio commented, “The dataTaker gives us a large feature set. We like the DT80 – it is very cost-effective given all its features.”

Calio also utilized CAS DataLoggers’ free tech support to get a quick start on system configuration and setup. This was especially useful since the project was on a tight schedule and much of the configuration was performed in the field.  Calio commented on the logger’s programming: “The free support helped me get off the ground really quickly, and after taking some time with the graphical interface, it’s become easy to work with.”