You are at:Home»News»Major Milestone: Sewer Installation Is the Largest Capital Project in St. Albert’s History

During the design, multiple alignment options were reviewed and a workshop was conducted using an analytical hierarchy process to select a preferred alignment. The final alignment went through a transit station that was relocated for construction, underneath the Sturgeon River, in a road allowance for a collector road with residential housing on either side of it and through a 25-year-old botanical park.

Once an alignment was selected, the design team updated the City sanitary model to better represent the demand on the system, impose an inline storage solution due to an outlet capacity constraint, and size the trunk based on conveyance, storage and constructability. Due to the shallow grade and the elevation of the river, it was initially proposed to include a lift station on the new trunk. However, after multiple design iterations, a triple barrel siphon was implemented that eliminated the need for a lift station. 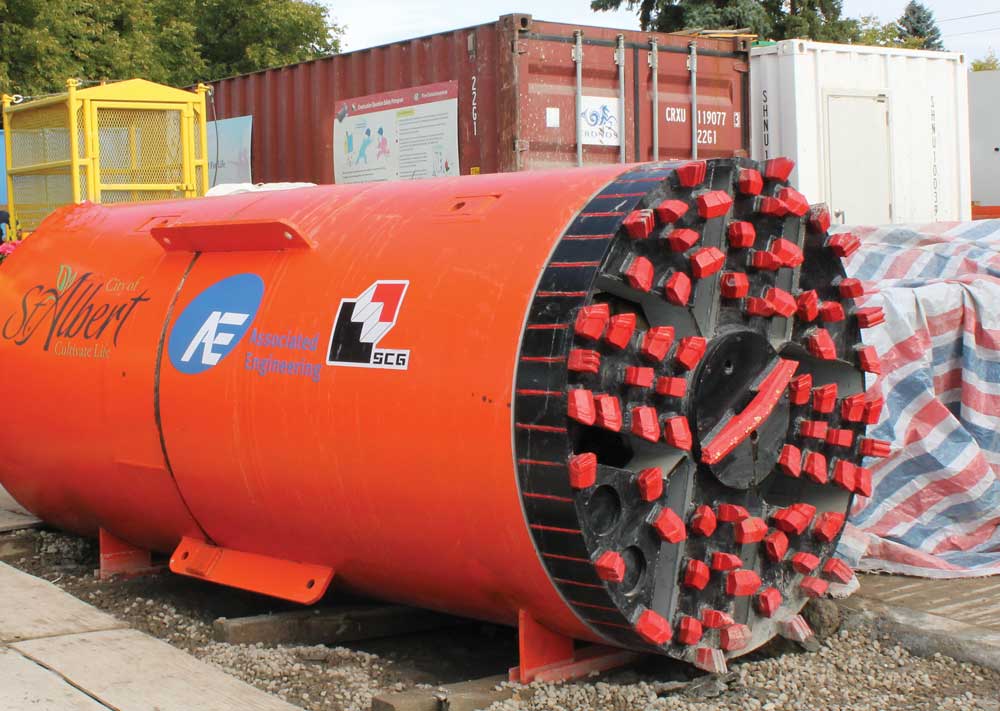 The final design included: 2,600 m of 1,500 mm diameter sanitary sewer by microtunnelling; 400 m of 1,200 mm diameter pipe by open trench; a triple barrel siphon crossing of the Sturgeon River by horizontal directional drilling (HDD); relocation of numerous shallow utilities; and installation of 19 manhole structures and chambers ranging from 3- to 15-m in depth.

The project was tendered December 2016 and awarded to Shanghai Construction Group (Canada) Corp., with construction commencing in March 2017. The first stages of the project included the triple barrel siphon crossing. The siphon crossing consisted of two 400-mm and one 650-mm diameter HDPE pipes, each 130 m in length. These were installed by HDD with a horizontal separation of 5 m and a vertical clearance of 6 m from the bottom of the river.

Following the siphon crossing, the contractor began construction of the shafts. Shaft construction was ongoing from April 2017 to March 2019. Based on the silty soils and the high water table, a combination of two liner plate shafts, two sheet pile shafts, and seven secant pile shafts were constructed. The deepest shaft was a 13.8 m deep secant pile shaft, which required piles at a depth of 21 m.

Throughout the summer of 2017, the contractor fabricated a microtunnelling machine specifically made for the anticipated soil in area. During that same time, the design team was engaged with the contractor’s selected manufacturer to review the product material selected for the trunk.

For the majority of the project, a reinforced fiberglass pipe with a stiffness of 415 was selected. However, due to the soft soils expected near the river valley, and a proposed 478 m drive, a custom fiberglass reinforced pipe with a stiffness of 680 was created. This pipe took several months to refine the mix design to achieve the required stiffness. Throughout the testing of the 680 pipes, the manufacturer broke their equipment trying to test the limits of the pipe.

The first tunnel drive was completed in October 2017 and consisted of 138 m. This first drive exposed constraints of the tunnelling machine, and opportunities for optimizations for the following drives. Ultimately, the contractor made the decision to fabricate a second machine overseas and ship it to Canada. Using the information collected from the first drive, the second machine was better suited for the silty soil conditions and high groundwater. Such optimizations included a more open cutting face, increased water jets and a large water cannon.

The second microtunnel machine arrived onsite in March 2018, and started the second drive in April 2018. A short 50 m drive was complete under the main arterial road in St. Albert. With the new optimizations, the new tunnel machine produced rates twice the speed seen by the first machine.

Multiple major constraints were encountered throughout the project that needed to be addressed to allow for further optimization of the tunnelling performance.

Silty Soils, High Water Table: The ground did not allow for the tunnelled hole to remain open. The constant filling of the annular space around the pipe produced high friction levels. Grout ports were repositioned and increased and ongoing balancing of mud mixtures were required.

Nearby Residences: Because of the proximity of houses to the launch shaft equipment including the mud separator system, generators and pumps, the project was initially proposed to tunnel 16 hours a day. The contractor learned that the jacking loads to start the pipe movement after the extended down time was reaching critical levels. As a result, a noise barrier system was implemented to reduce the sound levels to less than 50 dBs within a 30 m radius of the site, allowing for 24-hour construction by the contractor while tunnelling. 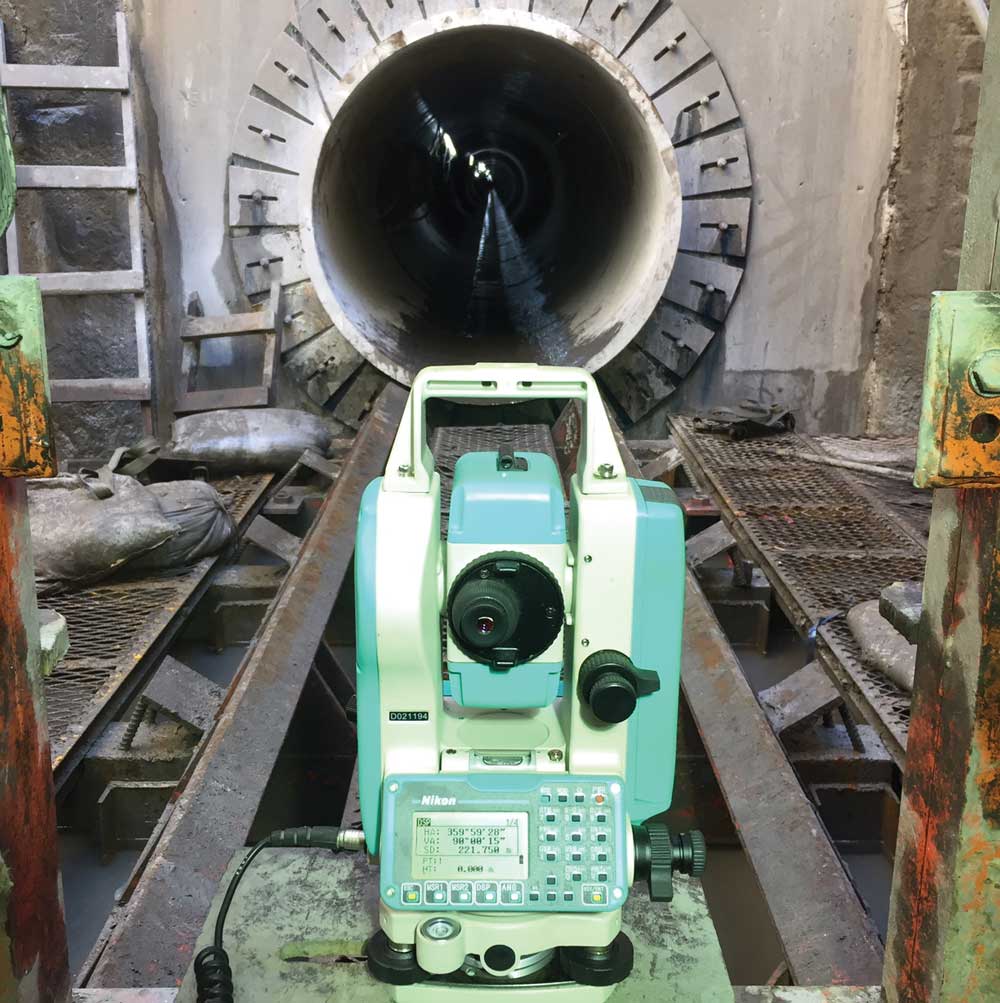 With the major constraints addressed, the third drive of 380 m began in June 2018 and finished in July 2018.

The fourth drive marked a major milestone as the longest drive of the project. With the ongoing balancing of mud mixtures, and a 24-hour operation, the drive produced even higher tunnelling rates, at an average of three times faster than the first drive. The 478 m drive began in July 2018 and was completed in August 2018. The manufacturer noted that this marked the longest drive completed for the fiberglass reinforced pipe.

The remaining five tunnel drives were completed from September 2018 to April 2019. Each tunnel drive allowed for minor optimizations of the system and operations, allowing for progressively better rates.

Construction of the line was completed in July 2019. This included nine tunnel drives totaling 2,564 m, 405 m of HDD for the siphon crossing and 409 m of open cut trenching. The North Interceptor Trunk Line was put into service on June 26, 2019, marking the completion of the largest capital project in the history of the City of St. Albert.

Paul Dedeluk, P.Eng., is a project manager at Associated Engineering.