EDITOR’S NOTE: This project was named Project of the Year-New Installation by Trenchless Technology magazine and was featured in the October 2017 issue of that publication. 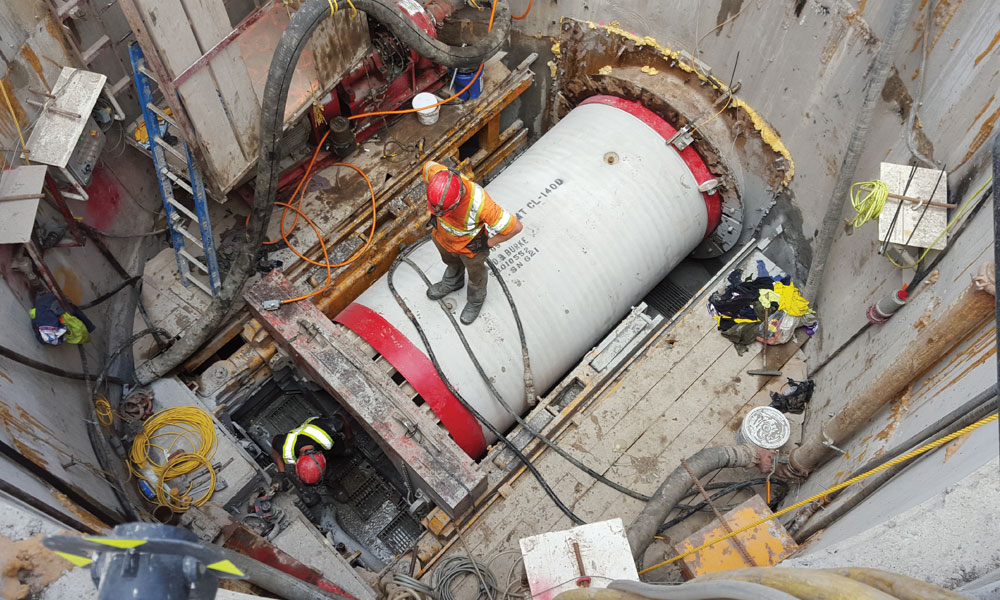 As part of an effort to keep pace with a growing population, Halton Region, located within the Greater Toronto Area (GTA) in southern Ontario, began a program to update its sewer system. One major component of that program, the Rebecca Trunk Wastewater Main, not only represented a major step in meeting future infrastructure demands for the region, but also for microtunneling in North America.
The project involved more than 4 km (2.5 miles) of 1,200- and 1,350-mm (48- and 54-in.) microtunnels within Oakville, an urban and affluent town along the shore of Lake Ontario. The project included nine microtunneling drives (eight curved) ranging in length from 180 to 626 m (590 to 2,053 ft), with seven of the drives completed in rock.

Due to the length of drives, number of curves, difficult ground conditions and behavior, and congested urban work environment, the project helps raise the bar in what can be accomplished with microtunneling.
“The project was completed in a highly congested and affluent area, so digging up roads and taking out large numbers of established trees would have been very difficult to do” said Paul Headland of Aldea Services, the trenchless design consultant for the project. “Trenchless construction was really the only way that we could accomplish the goals of upgrading the infrastructure while minimizing disruption to residents and businesses while accommodating the project specific design constraints.”

In addition to the nine tunnel drives, the Rebecca Trunk Wastewater Main Project comprised five jacking pits and six receiving pits. Five of the nine drives exceeded 520 m (1,700 ft) in length. The drives, located at depths up to 14 m (45 ft) below ground surface, were excavated using a Herrenknecht (AVN1200 and AVN1350) slurry microtunnel boring machine (MTBM) on a grade of 0.15%. With the exception of two mixed-face drives, microtunneling was entirely through rock. 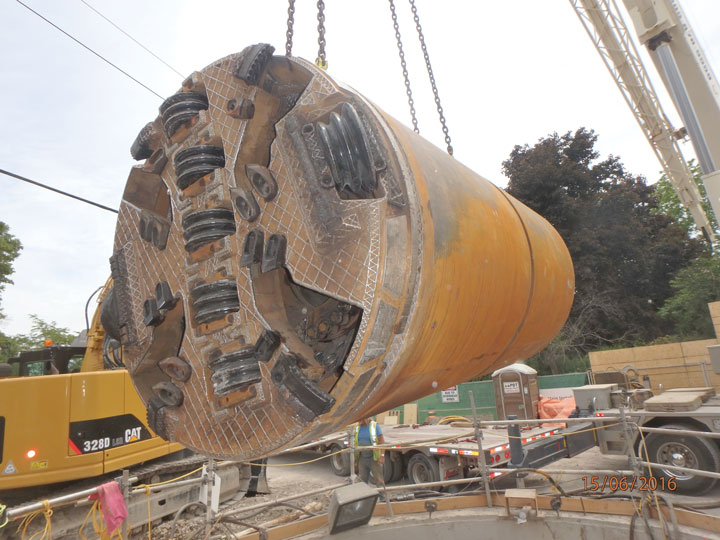 The drives were excavated using Herrenknecht (AVN1200 and AVN1350) MTBMs.

The project was awarded to Drainstar Contracting Ltd. as the low bidder with Ward and Burke the shaft and microtunnel subcontractor. Construction commenced in December 2015 with preparation of works areas, traffic control, construction of jacking and receiving pits using reinforced concrete caisson shaft construction method, and installation of geotechnical instrumentation. All drives were completed on Oct. 25, 2016, nine weeks ahead of the scheduled construction completion date of Dec. 30, 2016. 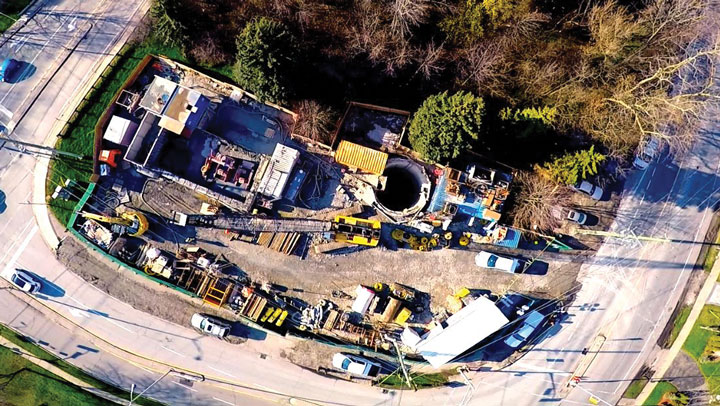 The project took place in built up areas of Halton Region, located within the Greater Toronto Area (GTA) in southern Ontario.

The Rebecca Trunk Wastewater Main was successful in helping Halton Region to upgrade its wastewater system while minimizing impact on businesses and residents. In addition to added capacity, the project had the added value of eliminating lift stations. Some of the project highlights included:

The Rebecca Trunk Wastewater Main marks a step forward for the microtunneling industry, showcasing the abilities of the method in conjunction with proper planning, design, construction, and management. The longest drive, at 626 m (2,053 ft), incorporated four curves and snaked through the concrete-filled box culvert, while registering a maximum jacking force of 140 tons – well below the capabilities of both the microtunneling equipment and the Decast-supplied reinforced concrete jacking pipe.

“In conjunction with the automated bentonite system and proper mud management, we were able to keep the jacking forces well below the capacity of the pipe and also the jacking force we were capable of applying” Headland said. “Ultimately, the lengths of these projects can be increased significantly. With existing technology, sound engineering, and a good understanding of the ground conditions and ground behavior, I see the industry progressively achieving longer drive lengths in the future.”

The Rebecca Trunk Wastewater Main demonstrates all that is good about the tunnel business, with sound design, open procurement for competitive pricing and intelligent review and acceptance of value engineering proposals for the betterment of the project. This collaboration with the project objectives always in mind produced a facility with a minimum of local impact, within the allocated budget and completed early for the people of the Region of Halton.